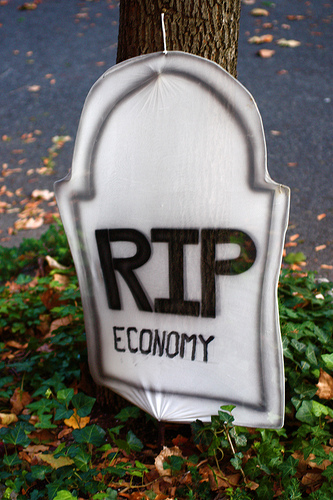 Sociopaths In Charge Of Banks And Government

William Black, Associate Professor of Economics and Law at the University of Missouri, Kansas City, on the S&L crisis, the current banking situation, and Ben Bernanke’s part in the whole meltdown.  I’m still waiting for the FBI to finish their investigation of Wall Street.  You’re not holding your breath are you?

Pay attention folks and watch the series.  Mr. Black explains how a trillion dollars in losses are not being reported so as to allow profits to show and bonuses to be paid.  Would you also like to know the four part recipe to making a mountain of cash on Wall Street and ripping off the taxpayer at the same time?  Want to hear how the reforms from the S&L crisis have actually made our current situation worse?  Did not think so.  TOO BAD!  Watch and educate yourself on this issue.

The recipe for Banks:

Part 2: Why the Obama administration is so weak on economic reform and recovery. Geithner was a failed bank regulator. Pay attention here folks – Bernanke appoints Patrick Parkinson; the same name that filleted Brooksley Born when she “wanted to regulate credit default swaps…” back in the late ’90s. More info on Brooksley – Brooksley Born Takes On The Big Boys And We All Lose.


Part 3:  The continuing cover-up of the unreported losses by using red crayon math accounting practices.  Mr. Black explains that there is “no accident that there are no indictments, much less convictions of the senior insiders that drove these liars loans”.  This particular crisis is at least 30% greater than the S&L crisis and we have less than 1/6th of the resources used then applied to this crisis.  He also covers the the upcoming financial reform legislation, the silliness surrounding the bills, and the fact that the only entity that hates consumers and loves banks more than the Treasury is the Fed.  Imagine that.


Part 4:  What William Black would say to Obama if he ever actually called Mr. Black.  This segment also includes Mr. Black’s ‘Top Ten Ways To Crack Down On Corporate Financial Crime’.  He points out that Obama is part of the problem in the recovery and re-regulation crisis because he is such a pantywaist on the issues while allowing Geithner and Summers to run us into financial oblivion.


Part 5: Solutions to the crony capitalism thriving in Washington and New York.


For those that would like more information, check out the related links at the bottom of the post. It’s a tad bit scary to see all those posts next to each other and they are just the tip of the iceberg.

Bad Behavior has blocked 2735 access attempts in the last 7 days.