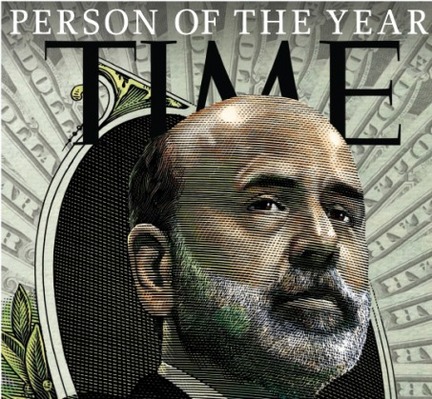 AYFKM? Now Bernanke Wants To Put The Brakes On?

Time's Person of The Year

Ben Bernanke is so deserving of this next AYFKM? Award for his warning today about the US debt, and how The Fed won’t “monetize” the debt, all the while not taking responsibility for his part in the financial fiasco.

Bernanke delivers warning on U.S. debt
Stage is set in U.S. for a Greek tragedy

With uncharacteristic bluntness, Federal Reserve Chairman Ben S. Bernanke warned Congress on Wednesday that the United States could soon face a debt crisis like the one in Greece, and declared that the central bank will not help legislators by printing money to pay for the ballooning federal debt.

Recent events in Europe, where Greece and other nations with large, unsustainable deficits like the United States are having increasing trouble selling their debt to investors, show that the U.S. is vulnerable to a sudden reversal of fortunes that would force taxpayers to pay higher interest rates on the debt, Mr. Bernanke said.

“It’s not something that is 10 years away. It affects the markets currently,” he told the House Financial Services Committee. “It is possible that bond markets will become worried about the sustainability [of yearly deficits over $1 trillion], and we may find ourselves facing higher interest rates even today.”

Mr. Bernanke for the first time addressed concerns that the impasse in Congress over tough spending cuts and tax increases needed to bring down deficits will eventually force the Fed to accommodate deficits by printing money and buying Treasury bonds — effectively financing the deficit on behalf of Congress and spurring inflation in the process.

Some economists at the International Monetary Fund and elsewhere have advocated this approach, suggesting running moderate inflation rates of 4 percent to 6 percent as a partial solution to the U.S. debt problem. But the move runs the risk of damaging the dollar’s reputation and spawning much higher inflation that would be debilitating to the U.S. economy and living standards.

Rep. Brad Sherman, California Democrat, asked Mr. Bernanke directly whether the Fed would consider such a strategy, especially since IMF officials endorsed it.

“We’re not going to monetize the debt,” Mr. Bernanke declared flatly, stressing that Congress needs to start making plans to bring down the deficit to avoid such a dangerous dilemma for the Fed.

“It is very, very important for Congress and administration to come to some kind of program, some kind of plan that will credibly show how the United States government is going to bring itself back to a sustainable position.”

Separately, Mr. Bernanke’s predecessor, Alan Greenspan, told Bloomberg News that “fiscal affairs are threatening the outlook” for recovery from recession as Congress and the White House have been unable for years to make tough decisions to raise taxes or cut spending.

And here’s the kicker; $5 Trillion in mortgage-backed and assorted other debt connected to Fannie and Freddie that is not being included in Obama’s budget.

Separately, the debate continued over whether Fannie Mae and Freddie Mac, the two mortgage financing giants, should be included in the federal budget books now that the Obama administration has taken the limits off aid the Treasury Department is prepared to give the companies to keep them solvent.

Republicans, including Rep. Spencer Bachus of Alabama, the top Republican on the banking committee, have argued that the government is now effectively guaranteeing Fannie and Freddie’s nearly $5 trillion of mortgage-backed securities and other debt, so their revenues and liabilities should be included in the federal budget as obligations of the government. Taking this step would greatly bloat the federal balance sheet.

Mr. Bachus said he worries that keeping Fannie and Freddie’s status off the federal books is “the same sort of financial shell game that has brought governments like Greece to a crisis point.”

But Treasury Secretary Timothy F. Geithner, who also testified on Capitol Hill on Wednesday, said the administration opposes including the quasi-government entities in the budget, although it lifted the limits on aid to Fannie and Freddie with the intent of assuring financial markets that the U.S. government stands behind their obligations.

“We do not think it is necessary to consolidate the full obligations of Fannie and Freddie onto the nation’s budget. But we do think it’s very important … that we make it clear to investors around the world that we will make sure that we will take the actions necessary” to keep the two entities stable, he told the House Budget Committee.

Want a little more good news to go with that fiscal celebration?

…as I like to call it, the Red Crayon Math being used by the government to hide the unsustainable debt they have buried us in. Glenn hammers Nancy and Chris Dodd, but the most interesting segment is the piece he does with David Buckner on America’s inability to be competitive in world markets, the true debt we are shouldering, and the interest we are paying on that debt. What will blow your mind even more is the % of our tax revenues that will be going to pay the interest if when the interest rate increases. Get out your duct tape! For those of you that have not yet seen this debt clock, please take a moment to go over and check it out – and make sure you bring a bucket.

You can see the entire show on Patriot’s Network.