Bob Basso as Thomas Paine on the madness coming out of Washington, D.C. in regards to amnesty for the millions of lawbreakers that have entered our country and stolen our livelihood.

The inmates of the asylum on the hill, your non-representing representatives in Congress; you know them, the ones that never listen the will of the majority, because they know better than you, are once again attempting to disguise sheer madness as an obligatory act of humanitarianism and fairness. It is neither!

Amnesty for 20 million illegal aliens is a universal statement to every country in the world from the people of the United States, “overcome us with numbers and our pandering politicians will see you as future voters to cement their power base.” 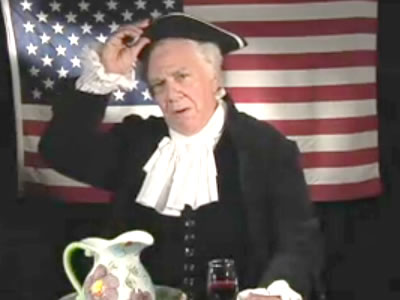 “We are either a nation or laws or we are not!”

Bob Basso as Thomas Paine explaining the politicizing of this issue to create more voters to secure a political party’s power base.

Americans break the law and go to jail; illegal aliens break the law and receive citizenship.  When I hear Luis Gutierrez speak about common criminals as victims, I know that the liberal left cannot be allowed to gain total control of this country due to their incredible lack of a moral compass.

The most interesting aspect of this video is Luis Gutierrez speaking making these aliens legal so that they can pay their taxes.  Yet another revenue stream for a bankrupt treasury, but Luis has not taken into account that there will be fewer and fewer jobs in the future.

From Barack Obama’s behavior and previous statements, it appears he thinks America is a democracy.

The march on Washington DC is coming folks; 9/12/09.  Currently, I have found only one march besides Glenn Beck’s 912 Project; the 09.12.09 National Taxpayer Protest being sponsored by FreedomWorks Foundation, which initially I was leary of until I saw the other co-sponsors, Campaign For Liberty, being one such co-sponsor.  Have you given serious thought to attending?  This will be your chance, and a defining moment for our republic.  Our non-representative representatives will either be listening or they won’t, and we will finally have our answer.  Do we get our Republic back or are we on our way to anarchy?

Bob Basso (Thomas Paine) was NOT summoned to the White House.  Here is his open letter to the selected resident.

Bob Basso: A Little Common Sense On Its Way Back To The White House?

The 21st century Thomas Paine, Bob Basso, has been summoned to the White House by the Usurper-In-Charge, “to discuss the disturbing nature of the videos.”  Common sense and a free republic have become “disturbing”?  You have to give Bambi credit for seeing someone that can steamroll his fascist conversion of our country when he sees it.  Bob Basso may not be the “leader” that Americans are looking for right now, but he definitely is the voice.

I have a feeling that silencing Dr. Bob Basso is going to be a little harder to do than making a deal with the Republican Party to get into the WH.

The man who created two phenomenally successful “We The People” YouTube videos urging Americans to stand up against Congress and reclaim their republic now – or perhaps lose it forever – reportedly has been summoned to the White House by President Obama to discuss the subject matter of the short films.

Bob Basso, who posts videos under the name funbobbasso on YouTube, has created videos in which he portrays Thomas Paine, author of the “Common Sense” pamphlet that made the case for independence during the American Revolution.

Basso, whose website offers his services as a motivational speaker, uses the YouTube presentations to condemn “non-representing representatives” and warns, “Only when they feel the almighty wrath of ‘We The People’ marching in the streets from California to New York shouting ‘We’re mad as hell and we want our country back’ will they get the message they work for you.”

He was scheduled this week to appear on the “Jerry Doyle Show” when he told the radio host that Obama had personally invited him to meet in the White House “to discuss the disturbing nature of the videos.”

According to a spokesman for Doyle’s show, at the time when Basso was supposed to be calling in for the show, he was unavailable. Basso reached the show several hours later, explaining he had been flooded by media calls and literally was unable to call out.

The result, the spokesman said, was that Basso promised to provide Doyle with the first exclusive interview after he meets with Obama, provided the invitation still stands after the was leaked to the press.

The spokesman said information about the meeting has not been made public, and show producers are waiting to see what develops. A WND message left for Basso was not immediately returned.

The Doyle show reaches about 3 million listeners each week, according to Talkers Magazine, and is the fastest growing show in Talk Radio Enterprises’ history with more than 240 stations

In his second video, which has been seen more than 1.1 million times, Basso challenges people to let Congress know their displeasure by sending tea bags.

He criticizes Congress for approving the “largest spending bill in history without reading it” and criticizes American citizens, because “you did nothing.”

He raises the issue of billions of dollars for benefits for illegal aliens, the exportation of U.S. jobs overseas and others.

“If your self-serving Congress were a business they’d all be in jail now,” he said.

“Wake up, America. While you were playing with the toys of your consumer wealth, you lost much more than your bloated economy of living beyond your means. You lost your representative democracy. Your servants have become your masters. Taxation without representation is tyranny,” he said.

Ladies and Gentlemen, some common sense for your consideration.

A special thank you to a reader, Kathy, for dropping the link and stating “Maybe he can explain the Constitution to the White House.” I am thinking that we ALL are going to have to do that.