Live streaming coverage of the Tax Day Tea Party in Washington, D.C. starts at 6pm eastern from FreedomWorks. You can watch live here after a simple registration.

I Have One Question…

MsPlacedDemocrat just put up a post about Bambi attacking Fox News and Tax Day Tea Partiers, where she makes some very relevant points.  I only have one question…and it is completely off topic; why is bambi in St. Louis? Anybody, anybody?

Real Americans Have A Message For Congress

You know you have Congress on the run when articles like the one that follows are printed, and Nancy Pelosi calls the tea parties “astroturfing”.  The dingdongs in Washington, D.C. have realized that even with the smear job that the MSM has been doing lately after completely ignoring the protests, this MOVEMENT IS REAL and GROWING!  You know that Axelrod was glued to FOX yesterday and has a game plan this morning using ACORN and the Obama Army to combat a real grassroots push to rein in this unconstitutional government.

We were out in the streets yesterday because

From The Hill’s Blog Briefing Room:

“The ‘tea parties’ being held today by groups of right-wing activists, and fueled by FOX News Channel, are an effort to mislead the public about the Obama economic plan that cuts taxes for 95 percent of Americans and creates 3.5 million jobs,” Schakowsky said in a statement.

“It’s despicable that right-wing Republicans would attempt to cheapen a significant, honorable moment of American history with a shameful political stunt,” she added. “Not a single American household or business will be taxed at a higher rate this year. Made to look like a grassroots uprising, this is an Obama bashing party promoted by corporate interests, as well as Republican lobbyists and politicians.”

I want to thank Jan for letting us know that we are despicable and shameful people.  Everybody add Jan’s name to the list of traitors who are name-calling average everyday hard-working Americans that are so incredibly self reliant that we just kept rolling with the punches and not saying anything until DC tried to take everything from us, our children, and our grandchildren in the last 2 months, i.e. money, homes, land.  What’s next; food (HR875), guns (HR45), the internet (S773), and installing your messiah as dictator (HJ Res 5)?

We have a message for you Jan, and the rest of your buddies in Washington…we ARE NOT right-wing activists; WE ARE AMERICANS, we are democrats, republicans, independents, and non-affiliated voters who are actually in the top half of the class and have enough common sense to see where all this spending and government control is going, AND WE ARE NOT GOING TO ALLOW YOU TO ABUSE THE POWER THAT WAS GIVEN TO YOU ANYMORE!

Get ready for more tea parties ladies and gentlemen; saddle up!

CONGRESS; GET READY TO BE FIRED!

And now, your favorite dipstick in Congress:

Nazi Nancy Pelosi trying to “encourage” the bots to fall back in line:

I want you all to know that $400 or $800 (depending) that you are getting back spread out over your weekly or bi-weekly checks is coming out of my boss’ pocket, my pocket, the pockets of every small business owner, your children and your children’s children.    This Congress, the last Congress, Bambi, W, the Treasury and THE FED are bankrupting this country.

Today’s AYFKM? Award goes to Leslie Marshall for having her head so far up Bambi’s ass that she no longer can think straight or have a rational and reasonable conversation.  Anyone want to give The Monster permission to verbally bitchslap this wench back into American History class for thinking that the Tea Party participants are whining, and that there is no message behind THOUSANDS protesting our LIFE EARNINGS being siphoned away by the Government, The Fed, The Treasury and the World Central Banks, not to mention our civil liberties and Constitutional Rights!

Leslie? “Big Government”: $90 Billion of taxpayer money going to foreign banks, Government firing Rick Wagoner and installing “their” replacement, Government forcing banks to take TARP Money, Government refusing repayment of TARP MONEY, all three branches of Government shredding the contract with American Citizens over the last 100 years, Government trashing our Constitution with the Finance Board of the United Nations on 4/2/09 at the G20, AND the Trillions The Fed and Treasury won’t tell us about that have gone to their buddies on Wall Street…want me to keep going?

LESLIE – YOU, “EYES CLOSED, HANDS IN THE AIR, EVERYTHING IS GONNA BE ALRIGHT”, OBAMABOT,

WANT TO DEBATE ME?

JUST GO DRINK YOUR KOOLAID AND SHUT THE FUCK UP!!!

Tea Party Cancelled? Send A Message To Washington And Start Packing Your Bags

This post has been a few days in the writing, but now is a very good time to put these ideas out because now I have a great segue into it.  We have reached the crossroads folks, and we have to make a decision.  More and more people are becoming “awake” to the fact that our government stopped listening to us awhile back.  We did not want a bank bailout; it happened, and over half the money went to foreign banks.  We did not want the stimulus plan; a $1.2 Trillion fiasco; they did not read it and passed it anyways. We said “let the corrupt companies fail”, that did not happen.  We do not want the $3.7 Trillion Budget being put forth by the fascists in charge, and Nazi Nancy and her buddy, Prince Harry, “I need you to believe that we can do anything we want, so why fight?”, are going to make that happen too.  We do not want our taxes to be increased anymore, that’s definitely on the way.  It is abundantly clear to me that the people we elected to govern the country have decided to no longer listen to us and follow our wishes as was laid out in the Constitution of the United States.  How much more blatant does it have to be?

A tea party scheduled for April 1st has been cancelled because the City of Cape Coral, Florida felt more than 500 people were going to attend, therefore requiring the organizer to obtain a permit AND insurance. The news article makes it seem like the city cancelled the tea party, but fair is fair, and technically the organizer, Lynn Rosko made the decision.  Did the City of Cape Coral box her into a corner?   Well if it looks like a duck….

CAPE CORAL, Fla. – A tea party to protest government spending and taxing is canceled. Canceled by the government.

Why? They feel too many people could show-up.

Lynn Rosko planned to hold a tax payer tea party at Jaycee Park in Cape Coral on April 1st. The idea was announced at a Cape Coral City Council meeting, then an e-mail blast by the Republican Party and it was mentioned in the local media.

With all of that attention, the City of Cape Coral felt there could be more than 500 people attending the tea party.

Therefore Rosko needed to get a permit and insurance for the event. Rosko says she’s not willing to get insurance and accept liability for something that a stranger could do. Rosko told WINK News, “I have rescinded any organizing or supervision or what ever you want to call it over this tea party on April 1st.”

WINK News spoke to the director of parks for Cape Coral. He says that even now if Rosko is willing to get insurance for the event he’ll likely re-authorize it.

Do you recognize this?  I just re-read the Constitution and Bill of Rights AGAIN because I was looking for the exact wording of this amendment:

Article the third [Amendment I]
Congress shall make no law respecting an establishment of religion, or prohibiting the free exercise thereof; or abridging the freedom of speech, or of the press; or the right of the people peaceably to assemble, and to petition the Government for a redress of grievances.

The clause the states wanted added into the Constitution is right there in black and white.   “Congress shall make no law… abridging the right of the people peaceably to assemble, and to petition the Government for a redress of grievances.”  There is nothing in there about permits and insurance, and the city laws passed requiring permits and insurance, (in hopes of deterring ‘the people’), are an abridgement just as much as the permit that I had to obtain to have a firearm.

Our Constitution was put in place to constrict the power of the federal government, not control our every action.

We now have another prime example of how our Constitution has been eroded by the powers that be in hopes of controlling us and turning us into serfs, and according to Dr. Bob Basso/Thomas Paine, they have done a fantastic job of turning us into spectators to our own demise.

So here we all are milling about at the “crossroads” between losing our Constitutional freedoms and taking back our country, wondering what exactly we are supposed to do because the people we elected to govern wisely have all gone off a power/money/sex cliff with a moral compass that has become a gyroscope.  We entrusted them with the governing of our country so that we could get the actual work of making the country prosper accomplished for ourselves and future generations.  What have they been doing while we have been building a nation?  Once again, if it looks like a duck….or…(insert your own word here…)

For months I have felt that a 50 million person march (or more) on Washington, D.C., shutting down the business of the capital might just get our elected officials attention.  Maybe.  Mr. Basso is correct in that every single Congressman and Senator that DID NOT READ THE 1100 PAGE STIMULUS BILL SHOULD BE FIRED, and I do not think waiting until next year sends the right message – you are fired now!  Go home, your services are no longer required.  When was the last time that they actually passed meaningful legislation that helped everyday Americans?  Women got the vote in 1920?  The repealment of Prohibition? Don’t even start with FDR and his ponzi scheme of Social Security.

All of that being said, here are some suggestions that I urge everyone to tell their friends and family about, and then make it happen!

It is our duty and moral obligation to the Founding Fathers, every man or woman who has fought and DIED for our liberties, every legal immigrant that has made this country great, our parents and grandparents that made this country flourish, and OUR CHILDREN, to reign this suicidal, Constitution shredding, government in.  I, for one, do not want to slide off the fascist cliff that we are being so slowly led to.   How many of you think twice about what you say or write?  There is your indication!  This also includes the abolition of the Federal Reserve System so that we no longer have to pay interest on money that OUR TREASURY requested be printed.  A central bank system set up by the very corrupt bankers that are ruining our country right now is enough reason to get our sorry behinds off our couches and out into the streets!

The Tax Day Tea Parties are a great start, but we must think BIG! 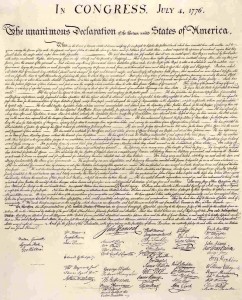