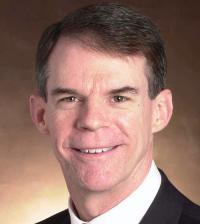 TARP 1 Was To Ease The Credit Crunch? Not So Much…

Take a good look at this photo and remember this man as someone who decided to step out of the shadows and act like what we know Americans to be.

“TARP actually was designed to give solid banks like U.S. Bancorp some extra cash to buy weaker banks in the system.” – Richard Davis

There is no “A, R or P” in the government’s Troubled Asset Relief Program, quipped U.S. Bancorp Chief Executive Richard Davis Tuesday morning in front of about 300 business people in Minneapolis.

“It’s just troubled,” the 50-year-old CEO said at the Thrivent Financial for Lutherans’ Business Leaders Forum. The forum invites executives to discuss how business and their principles intersect.

In his hour-long speech, Davis spoke about the economic crisis and the banking industry’s role in that crisis. But he kept the mood light, calling himself a “banker dude” and “Christian guy,” and at one point revealed that back in high school, he had been fired from his first job, at Toys “R” Us.

Some very profound words and very frightening words at the same time.  When Obama tries to nationalize the banking system and create an even greater chasm between those that CAN HAVE and those that CANNOT HAVE, we will be on the brink…

But Davis was critical of the U.S. Treasury’s Troubled Asset Relief Program introduced last fall, saying that while the program was well intended, it has turned out to be “lousy.”

Created to encourage lending to small businesses and consumers, TARP started by shoveling tens of billions of dollars at the country’s biggest banks but soon was expanded to include banks of all sizes. Minneapolis-based U.S. Bancorp got $6.6 billion.

But by Tuesday afternoon, a U.S. Bancorp spokesman said Davis had misspoke, and meant that because the largest banks in the country took TARP money, U.S. Bancorp and others were forced to do so as well, for competitive reasons.

Does that statement surprise anybody?  One must assume the corruption is layers and layers deep until someone like Richard Davis speaks out and blows the whistle.

Davis went on to say in his talk that while government officials marketed the program as a way to entice banks to lend again, TARP actually was designed to give solid banks like U.S. Bancorp some extra cash to buy weaker banks in the system. U.S. Bancorp did just that late last year when it acquired the assets of two failed banks in California, Downey Savings and Loan and PFF Bank & Trust.

Now what was I saying for the last umpteen months?  The banks used the money to buy each other and consolidate their power.

“We were told to take it so that we could help Darwin synthesize the weaker banks and acquire those and put them under different leadership,” he said. “We are not even allowed to mention that. … We were supposed to say the TARP money was used for lending.”

Told to lie; by whom exactly?

But Davis is talking about it now, he says, because he and others oppose current and future strings attached to the program. Davis didn’t detail those strings, but he said he and some peers intend to voice their opinions to Washington, D.C., soon.

“Now they’re punishing you for having the capital,” he said, adding that he refuses to stand by and let his company become “collateral damage” in an attempt to nationalize the banks.

And here are some words of wisdom…

Near the close of his speech, Davis suggested that what the panic-stricken world needs more than ever now is a little bit of courage and some faith that it will get through this dark period.

“Perhaps what we should do is check ourselves and say, ‘OK, it is tough.’ What can we — any two of us, any five of us, any 200 of us — do to improve the outcome of this difficult circumstance,” Davis said. “And by the way, where’s the faith? … Where’s the belief that something is going to turn here and we might actually have a chance?”

Ladies and Gentlemen; we make our path, not Nancy, Harry, Bambi, Chris or Barney even though they are trying to enslave us and future generations.

What are we going to do, what are you willing to do, and what was the payoff for the Republicans to help the Democrats put Bambi in the White House?