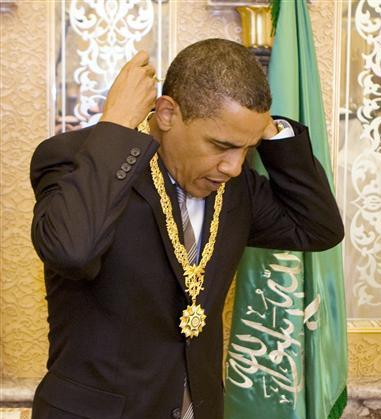 Obama Goes For The Gold

$24k per car for Cash for Clunkers, wasting $57k+ a weatherized home, obtaining control of two major auto companies, “arm-twisting rights” on numerous un-healthy AND healthy banks, and capping executive pay was NOT enough for the marxist-in-charge.  He’s absolutely has to be able to tell the health insurance companies how much they can raise their rates.  I really detest the insurance companies too, but come on!  Would any of this be happening if insurance companies were forced to compete instead of 3 or 4 big boys locking up each state separately?  How about families being able to buy their insurance policies so they aren’t indentured servants to some big corporation just for a policy that they are still paying through the nose for?  Hmm?

Is there any doubt remaining that this bozo does not believe in the American way of free enterprise?  Would anybody like to venture a guess as to where the line in the sand is, or when this is going to stop?  “Not likely to happen anytime soon” is probably the answer I will be hearing.  As of this writing, we have 255 days left before we can politically neuter this freak.

As always, emphasis from this point on is mine.

The president’s legislation aims to bridge differences between the bills adopted by the House and Senate late last year, and to frame his debate with Republicans over health policy at a televised meeting on Thursday.

By focusing on the effort to tighten regulation of insurance costs, a new element not included in either the House or Senate bills, Mr. Obama is seizing on outrage over recent premium increases of up to 39 percent announced by Anthem Blue Cross of California and moving to portray the Democrats’ health overhaul as a way to protect Americans from profiteering insurers.

Anthem, California’s largest for-profit insurer, has announced premium increases for nearly 700,000 customers, citing the soaring costs of medical care and the effects of a weak economy in which many younger and healthier people are dropping insurance.

How about California’s 12.4% unemployment added to the numbers of “dropped” insurance?  Once again, doesn’t it seem a bit too convenient for the pResident to be getting this type of news right before his ‘summit’.

The president’s new provision also seemed to offer Republicans an opening for a new line of criticism — that Mr. Obama and Democrats are anticipating the possibility of hefty price increases for health insurance even after their big legislation is adopted.

Mr. McConnell said the president, in proposing a new version of the Democrats’ legislation, seemed to prejudging the outcome of the session. “If they are going to lay out the plan they want to pass four days in advance,” he said on Fox, “What are we discussing on Thursday?”

If there ever was another case for states’ rights, here it is.

The president’s bill would grant the federal health and human services secretary new authority to review, and to block, premium increases by private insurers, potentially superseding state insurance regulators. The bill would create a new Health Insurance Rate Authority, made up of health industry experts that would issue an annual report setting the parameters for reasonable rate increases based on conditions in the market.

Officials said they envisioned the provision taking effect immediately after the health care bill is signed into law.

The legislation would call on the secretary of health and human services to work with state regulators to develop an annual review of rate increases, and if increases are deemed “unjustified” the secretary or the state could block the increase, order the insurer to change it, or even issue a rebate to beneficiaries.

The new rate board would be composed of seven members, including consumer representatives, an insurance industry representative, a physician and other experts like health economists and actuaries, the White House said. The board’s annual report would offer guidance to the public and states on whether rate increases should be approved.

NONE of this would be necessary if they would just put the missing element of free-enterprise competition into the mix.  Instead, we are going to continue to get screwed by the insurance companies, and pay tax dollars for this added layer of government bureaucracy.

Will the republic survive 255 more days?

White House will release its health bill at 10 a.m. Monday

Bad Behavior has blocked 2213 access attempts in the last 7 days.