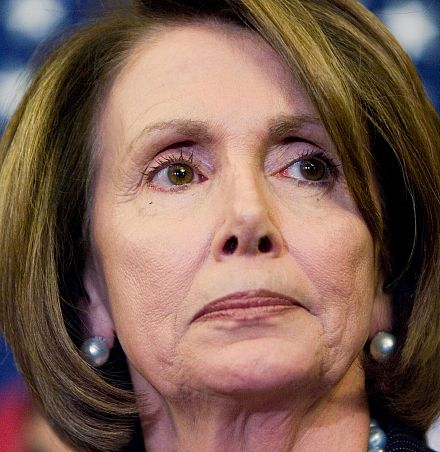 Stupid is as stupid does, and after watching this administration in daily meltdown, I am truly thinking about changing the category “The Daily Crime” to “The Daily Stupid”.

I actually read this press release from the Speaker’s Office earlier in the day, and just knew footage would show up on YouTube at some point. This gaffe machine (third only to Biden and Bahana himself) is a national embarrassment and needs to go back to San Fran permanently. One can hope…

In the meantime, enjoy a large segment of Pelosi Prattle from her remarks today.  I did not realize that she could shovel with so straight a face.

“As you are in Washington this week, we stand at the doorstep of history, ready to realize a centuries old dream, started by a Republican President, Teddy Roosevelt. He was the one who started this country thinking in this direction, and we are deeply in his dept. But, we are a hundred years late. A century old dream of health care for all, and we will be prepared to send the bill to President Obama’s desk that ensures affordability for the middle class, accountability for the insurance companies, and access for millions more Americans, tens of millions more.

“President Obama said, one year ago, when he called the first bipartisan, on March 5th of last year, the first bipartisan House and Senate meeting together with many outside stakeholders together at the White House, to find a way for us to come together. And at that time, he said: ‘Health care reform is entitlement reform.’ We cannot sustain the upward spiral of the increases in health care and what that means in Medicare and what it means in Medicaid. So from the standpoint of our national budget, and for your budgets, the current system, as I said, is unsustainable.

“Again, it’s unaffordable for families, individuals and families, for businesses of any size, and it is a cost to our economy. Imagine an economy where people could follow their aspirations, where they could be entrepreneurial, where they could take risks professionally because personally their families health care needs are being met. Where they could be self-employed or start a business, not be job-locked in a job because they have health care there, and if they went out on their own it would be unaffordable to them, but especially true, if someone has a child with a pre-existing condition. So when we pass our bill, never again will people be denied coverage because they have a pre-existing condition.

“We have to do this in partnership, and I wanted to bring up to date on where we see it from here. The final health care legislation that will soon be passed by Congress will deliver successful reform at the local level. It will offer paid for investments that will improve health care services and coverage for millions more Americans. It will make significant investments in innovation, prevention, wellness and offer robust support for public health infrastructure. It will dramatically expand investments into community health centers. That means a dramatic expansion in the number of patients community health centers can see and ultimately healthier communities. Our bill will significantly reduce uncompensated care for hospitals.

“You’ve heard about the controversies within the bill, the process about the bill, one or the other. But I don’t know if you have heard that it is legislation for the future, not just about health care for America, but about a healthier America, where preventive care is not something that you have to pay a deductible for or out of pocket. Prevention, prevention, prevention—it’s about diet, not diabetes. It’s going to be very, very exciting.

“But we have to pass the bill so that you can find out what is in it, away from the fog of the controversy. Furthermore, we believe that health care reform, again I said at the beginning of my remarks, that we sent the three pillars that the President’s economic stabilization and job creation initiatives were education and innovation—innovation begins in the classroom—clean energy and climate, addressing the climate issues in an innovative way to keep us number one and competitive in the world with the new technology, and the third, first among equals I may say, is health care, health insurance reform. Health insurance reform is about jobs. This legislation alone will create 4 million jobs, about 400,000 jobs very soon. (Oh Really?)

I thought this stupid ________ worked for us?  Rats, I forgot again – we are the new indentured servants to the greater collective good.