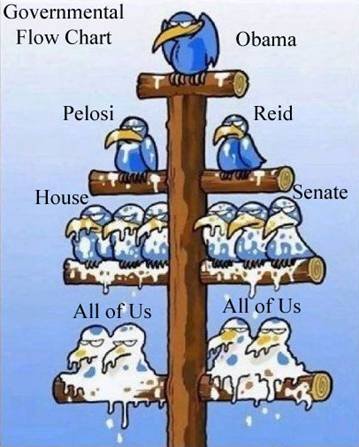 Dems Push Healthcare Through House; Sure Sign Of A Brown Win (UPDATED: Queen Nancy Has Spoken!)

Dems trying to shove through their un-Constitutional healthcare bill is a sure sign that Scott Brown is about to take back Dead Kennedy’s seat for the America People.

This story is breaking on the NY Times and I will update as more details become available.

From a NY Times email alert:

The White House and Democratic Congressional leaders,
scrambling for a backup plan to rescue their health care
legislation if Republicans win the special election in
Massachusetts on Tuesday, are preparing to ask House
Democrats to approve the Senate version of the bill, which
would send the measure directly to President Obama for his
signature.

WASHINGTON — The White House and Democratic Congressional leaders, scrambling for a backup plan to rescue their health care legislation if Republicans win the special election in Massachusetts on Tuesday, are preparing to ask House Democrats to approve the Senate version of the bill, which would send the measure directly to President Obama for his signature.

A victory by the Republican, Scott Brown, in Massachusetts, would deny Democrats the 60th vote they need in the Senate to surmount Republican filibusters and advance the health legislation. And with the race too close to call, Democrats are mulling several options to save the bill, which could be a major factor in how they fare in this year’s midterm elections.

Some Democrats suggested that even if their candidate, Martha Coakley, eked out a narrow victory on Tuesday, they might need to ask House Democrats to speed the legislation to the president’s desk, especially if lawmakers who previously supported the bill begin to waver as they consider the political implications of a tough re-election cycle. It is unclear if rank-and-file Democrats would go along.

There are going to be quite a few nervous Dems AND Pubs soon.

Even as Democratic leaders pondered their contingency plans, the House speaker, Nancy Pelosi, insisted that the health care legislation would move forward one way or another, though she acknowledged that Tuesday’s results could force a tactical shift.

“Certainly the dynamic will change depending on what happens in Massachusetts,” Ms. Pelosi told reporters in California on Monday. “Just the question of how we would proceed. But it doesn’t mean we won’t have a health care bill.”

“Let’s remove all doubt,” she added. “We will have health care one way or another.”

‘Hurry Up And Wait’: The Story Of Obamacare (UPDATED)

(Updated Note: The Senate was planning on voting on this bill at 8 am Christmas Eve. They have now decided to bump it up an hour to 7 am. Anybody surprised? Go here to watch live streaming video if you must.)

Hurry up! Hurry up! Hurryyyyyyyyyyyyyy UP! Right now! Pass a bill that will change the course of America from this point on BY CHRISTMAS! And then push the final form back to February. Politico is reporting that the WH is stating they expect healthcare not to be completed until February – DON’T YOU BELIEVE IT!  We are talking about the Barry, Harry, and Nancy show folks; they wanted it by Christmas and ‘taking care of Nebraska’ got it done.  I am still expecting more District of Criminals shenanigans to get a bill to the whiner-in-chief by his State-Of-The-USSA speech.

This bill has never been about health care reform, because if it was, we wouldn’t be paying for something four years before the ‘benefits’ are implemented in 2014. If health care reform was the actual goal, common sense bills would have been written that had the bi-partisan support of both the House and Senate, Americans would have been on board, and those bills would already be law and the changes already implemented.  How long has one side of the aisle been “working” on health care reform in the dark of the night, and behind closed and LOCKED doors?  Ah, yes, Obama has changed politics as usual by just adding steriods and meth to the process.

The White House privately anticipates health care talks to slip into February — past President Barack Obama’s first State of the Union address — and then plans to make a “very hard pivot” to a new jobs bill, according to senior administration officials.

Obama has been told that disputes over abortion and the tight schedule are highly likely to delay a final deal, a blow to the president, who had hoped to trumpet a health care victory in his big speech to the nation. But he has also been told that House Democratic leaders seem inclined, at least for now, to largely accept the compromise worked out in the Senate, virtually ensuring he will eventually get a deal.

The first order of business will be getting a health care deal, which Obama and Democrats see as inevitable. The White House is working closely with House Speaker Nancy Pelosi and other leading liberals to make sure the House does not push for significant changes to the compromise worked out in the Senate. This will force House Democrats, who often feel slighted by all the attention and influence the Senate gets, to swallow a compromise it did not write or advocate.

I wonder how that is going to work out for them in November 2010?  I wonder how many more dems are going to flip to republican before then?

The Senate vote to pass this piece of sh*t bill is on Christmas Eve at 8 AM eastern.

From midnight to 1 am, floor speeches were made for and against the senate healthcare bill and the addition of Harry Reid’s manager’s amendment.  Mitch McConnell and Harry Reid were the last to speak as is the ritual for the minority majority leaders.  McConnell knocked this one right out of the ballpark, while Harry went so far overboard on the whining and melodramatic stories and phrasing, that it went past the point of  nausea to the ridiculous.

I am posting these floor speeches as Americans that are now fully awake and paying attention to the 111th Congress and the current White House know that history is being made; just not the history that the Democrats wanted exactly.  Please pass these videos on, and wake up your neighbors to the un-Constitutional mandate that this bill places on every single American.

One can stop it.

One can stop it, or every one will own it.

One can stop it, or every single one will own it.

First, I cannot believe there is someone drinking from the cup of reality on  MSNBC.  Who left the door open, why did this guy wander in, and does he realize where he is?


The link below of an interview between Debbie Wasserman (D-FL) and Dylan Ratigan was dropped in comments on another post.  What is more interesting to me than the verbal trainwreck between these two people is the fact that health insurance companies’ stock is rising by double digits (in some cases) since 11.17.09.  Y’all are smart people, and smart people know that the government (Senate) is handing the American peoples’ heads on a platter to the insurance companies with this health care bill.  Just take a look at the monopoly that certain states have arranged with health care companies.  If I want to buy a policy for my child now, I have one choice and none of his current doctors are covered.

But what is even more important are these stocks rising because the trading public knows that HC insurance companies are about to get a windfall.

Debbie Wasserman Shultz get’s smacked down by Dylan Ratigan Morning Meeting 12-18-09 (6 minutes of talking over each other.)


KEEP CALLING THE SENATE AND CONTINUE TO MELT THEIR LINES:

Harry Reid is so desperate to pass some version of healthcare that he will not stop no matter how insane it makes him and his cronies look.  I wonder how many of the senators are going to be able to read Harry manager’s amendment before they vote for cloture at 1 AM on Monday morning?

Reid will unveil his amendment with a cost analysis from the Congressional Budget Office (CBO) shortly after the Senate votes at around 7:30 Saturday morning to clear a Defense spending bill.

“That’s the plan, soon after that vote because we want to file cloture on that quickly,” said Senate Democratic Whip Dick Durbin (D-Ill.).

Reid’s amendment will include all the changes he has proposed to secure the votes of 60 Democratic senators for the healthcare bill. The amendment may include a compromise on abortion language, a sticking point for centrist Sen. Ben Nelson (D-Neb.).

Durbin said it was necessary to unveil Reid’s amendment and file a motion to cut of a GOP filibuster on Saturday morning to set up a preliminary vote at 1 a.m. Monday.

Lawmakers must vote early Monday to cut off debate on Reid’s amendment if they are to stick to a timeline that would set a final vote on the healthcare bill after 7 pm on Christmas Eve.

Republicans may demand that Senate clerks read aloud Reid’s amendment, which could total several hundred pages. But Democrats say a reading could be completed within the same day and would not disrupt the schedule.

Make sure to go over for the rest of the action capabilities.

The Senate recently inched a little closer to passing ObamaCare, but the fight is far from over.

The vote right before Thanksgiving was a “motion to proceed” that simply begins debate on the Left’s proposed takeover of America’s health care system, and the Democrats’ Majority Leader Harry Reid barely got the 60 votes he needed.  Becasue of procedural rules in the Senate, he will need to get those same 60 again in order to shut off debate and actually pass this massive legislation that is over 2,000 pages, costs $2.5 TRILLION from 2014 to 2024, and will be paid for with huge tax hikes.

Our sources tell us to expect at least 3 to 4 weeks of debate and mabye more before there is a final vote to invoke cloture and actually pass the bill…if during this time we can peel off just one of the 60 that voted in favor of the motion to proceed, we will WIN and stop Obama, Pelosi, Reid, and the others on the Left in their quest to socialize our health care.

1) Click Call Congress to easily connect with your representatives and see our top targets (TARGETS RECENTLY UPDATED!). 2) Click Email Congress to easily send your message to Capitol Hill.  3) Click Boots on The Ground to see other ideas on how to be heard and see a map of upcoming rallies.  4) Access updated Talking Points 5) Click Issue Developments for the latest think tank analysis on the Left’s government-run health care bill.

Bad Behavior has blocked 2154 access attempts in the last 7 days.