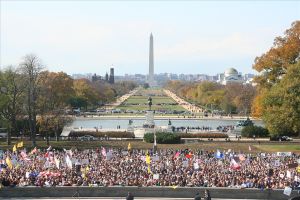 Dems To Walk The Plank For Pelosi Healthcare On Saturday

Desperate times call for drastic measures.  Case in point; rushing the largest un-Constitutional expansion of government in the history of the United States on a rare Saturday vote.  Are any of us surprised?  Nope.

Nancy Pelosi does not have the votes in the house yet to pass her gargantuan 2,000 page monstrosity that very few people have actually been able to read in it’s entirety…so…it is time to pull out all the stops and descend even farther into the pit of backroom arm-twisting, media spin, Chicago style thuggery, and whatever else passes for statesmanship these days in Washington, D.C.

Does one single democrat realize how much their party is degrading the reputations of the Presidency, the House, the Senate, and America in general?  Does one single democrat realize how much their tantrums, name-calling, and sneaky backroom maneuvering is traumatizing the entire nation, and more than likely, giving our allies in the world a moment of pause? Does it make it morally right for the democrats to plunge into the depths and follow the lead of squishy republicans with no moral compass just because Bush and the republicans did so earlier?

All of this speaks to the corruption and greed that has taken over OUR government when Nancy can call a special vote with the implications that ‘it’s legal’, even if it is not the ‘morally right’ thing to do.  I know many thoughtful Americans that take longer than the congress has taken with this healthcare manifesto to make decisions on choices that are much less life altering.

Aren’t you glad that Nancy, lacking grace, statesmanship, intelligence, and the maturity of thought and character to do what is right, is third in line for what is left of the presidency right after Joe Biden who believes that we have to spend trillions of dollars to keep from going bankrupt?  If anybody really looks at the people in charge, one would have to say America is definitely in decline with the amount of spoiled brats running around D.C. doing whatever they please without even a “by your leave” to the American People.  See Alan Grayson’s juvenile antics if you need a refresher.

Fortunately, for us, there is a “Healthcare Intervention” about to happen today on the Capitol Steps at Noon with Rep. Michele Bachmann, Jon Voight, Mark Levin, various Republicans and, (hopefully thousands), highly upset Americans to stop THE DEFINING MOMENT when our country is catapulted from capitalism to socialism.  That is, if Nancy does not pull some special brand of ‘Speaker Of The House’ thuggery and change the security protocols outside the Capitol and BLOCK AMERICANS from their OWN HOUSE.  One can hope that Nancy does not do something THAT lacking in little gray cells.

House leaders put in motion the machinery to hold a rare Saturday vote on the most far-reaching expansion of the health-care system in more than 40 years.

Even so, they were still locking down support Wednesday among a handful of holdouts, with the biggest bloc dissatisfied with the measure’s handling of abortion.

Many Democrats said passing the measure has become even more crucial politically after Republicans won governor’s races in Virginia and New Jersey this week. So Democratic whips worked their rank and file, while House leaders tried to secure a momentum-building endorsement from the AARP, the nation’s largest association of people over 50. President Obama, meanwhile, laid plans to visit Capitol Hill on Thursday or Friday to address House Democrats in a final push for his signature domestic initiative.

House Republicans are united in opposition to the majority’s health bill, so to pass the measure, Democrats will need at least 218 votes from their 258-member caucus. That group grew by two in Tuesday’s elections: While some Democrats bemoaned the loss of the governor’s mansions, House Speaker Nancy Pelosi (Calif.) cheerfully prepared to swear in newly elected Democrats from New York and California, both of whom have pledged to support the health bill.

“From our standpoint, we picked up votes,” Pelosi said.

House leaders said that they were confident of reaching their goal in time for a Saturday debate on the most significant changes to the nation’s health-care system since the creation of Medicare in 1965. They released 42 pages of amendments to the 1,990-page health package unveiled last week, a move that started the clock ticking on their pledge to make the legislation publicly available for 72 hours before lawmakers are asked to pass judgment.

“We are now in the final stage of moving this critical bill through the House,” Majority Leader Steny H. Hoyer (D-Md.) said in a statement. “Our members have worked very hard on this legislation, and I believe that as a result, we have a strong product that will lower costs and provide greater health care stability for all Americans.”

Unless, of course, you live in Hawaii.

Bad Behavior has blocked 2221 access attempts in the last 7 days.