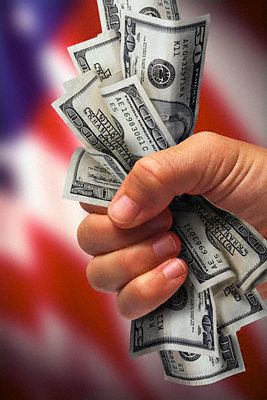 Big Brother’s Lock On Your Money Is Complete

I wrote about it; I tried to warn people, but after the healthcare fight we just went through, I think most people just wanted a breather from battling the fascists in Washington (to our long-lasting detriment).

Now we have the financial reform bill that includes the new federal agency Office Of Financial Research, and the Bureau of Consumer Protection keeping track of every single financial transaction you could possibly imagine; including your bank balance, and when you walk to the ATM to take cash out.  I wasn’t lying, but I do think I was one of very few writing about it.

(CNSNews.com) – Senate Democrats united to pass a financial regulatory bill that allows the government to collect data on any person operating in financial markets at any level, including the collection of personal transaction records from local banks, including customers’ addresses and ATM receipts. (emphasis mine)

The Senate voted 59-39 on Thursday to pass the bill – the chief aim of which is to more-heavily regulate the financial industry – sending it to a conference committee in the House of Representatives, where differences between the House and Senate versions will be ironed out.

The bill, if it becomes law, will create the Bureau of Consumer Financial Protection and empower it to “gather information and activities of persons operating in consumer financial markets,” including the names and addresses of account holders, ATM and other transaction records, and the amount of money kept in each customer’s account.

The new bureaucracy is then allowed to “use the data on branches and [individual and personal] deposit accounts … for any purpose” and may keep all records on file for at least three years and these can be made publicly available upon request.

Shelby slammed the new consumer bureaucracy, saying that it was meant not to protect consumers but to “manage” them by monitoring their behavior.

“Mr. President, make no mistake, behind the veil of anti-Wall Street rhetoric is an unrelenting desire to manage every facet of commerce under the guise of consumer protection.

Shelby also criticized the idea that Americans need government to watch over their every financial move, saying that it was better to allow people the freedom to make their own choices and fail than to never allow them the freedom to choose at all.

“Mr. President, I have faith in the American people and their ability to make good choices,” said Shelby.  “Granted, we do not always choose well.  But I believe that a poor choice freely made is far superior to a good choice made for me.”

“I am afraid that the architects of this bill do not share this sentiment,” he said. “Nor do they share my faith in the American people.”

Shelby further said that the ability of the Federal Reserve to collect such detailed information about the most basic of financial transactions was the beginning of an effort by government to regulate every financial action of every American citizen.

“This new consumer bureaucracy is intended by its architects in the Treasury to begin the process of financial regulation with the intent of changing the behaviors of the American people,” said the senator.

Shelby appears to be correct. The bill allows the bureau to collect any and all information on any person operating in the financial markets.

As it reads: “[T]he Bureau shall have the authority to gather information from time to time regarding the organization, business conduct, markets, and activities of persons operating in consumer financial services markets.”

Meanwhile, depending on the conference version of this bill, you may be able to fund a new federal agency that takes idle appropriations, invests them, and keeps the profits.  Those profits are ‘not considered the government’s property’. I am still trying to ascertain who that money actually belongs to because it is not yours anymore.

The above quotes are from Chris Dodd’s markup draft. I went to the actual amended bill (Amendment No. 3739 of Bill S. 3217) that was passed and found the pertinent information starting on page 62, with the investment and non-governmental monies section on page 78. It’s still in there.

At this point, the underground economy is about to get a bit larger.

UPDATE: More information on the Office Of Financial Research, here.