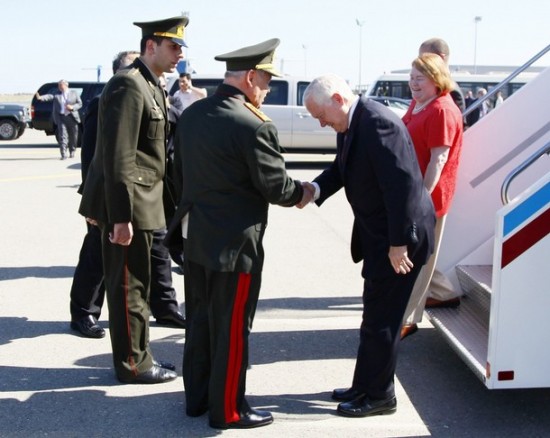 From “Shock and Awe” to “Bow and Scrape”

Part 2, on Afghanistan and Iran:

A VERY POLITICAL White House is fiddling around with the lives of American soldiers making them sitting ducks while they try to stall whatever decision they are going to make about increasing troop levels in the Afghanistan theatre, in the hopes of not pissing anybody else off while they are trying to get dems elected, the socialist takeover of healthcare, and whatever else is on their fascist agenda without political complications from the war.

Robert Gates has gone to NATO to pressure Bambi into a decision before this war goes anymore sideways, and now Obama really does look like a politically motivated and marketed, choking coward, (again!).

Gates also said he’s close to making his own decision about the best way forward. “I am moving into my personal decision phase,” he said, borrowing a phrase from White House Press Secretary Robert Gibbs.

The secretary spoke during a joint news conference with South Korean Defense Minister Kim Tae Young, after which he boarded a plane for a NATO defense ministers meeting in the Slovak capital of Bratislava.

The discussions in Bratislava will focus on far more than just troop numbers, Gates said, noting that the assessment provided recently by Army Gen. Stanley A. McChrystal, commander of NATO and U.S. forces in Afghanistan, dealt with other issues as well.

“General McChrystal has identified a number of needs in his assessment on which there is agreement,” Gates said. These range from civilian development to governance to training support for the Afghan National Army and Afghan National Police.

“So I think there is ample for us to discuss, going forward, that is completely independent of how many additional troops the president — and frankly, other members of the alliance — may decide to send,” he said.

BRATISLAVA, Slovakia — NATO defense ministers gave their broad endorsement Friday to the counterinsurgency strategy for Afghanistan laid out by Gen. Stanley A. McChrystal, increasing pressure on the Obama administration and on their own governments to commit more military and civilian resources to the mission.

General McChrystal, the senior American and allied commander in Afghanistan, landed here early Friday to brief NATO defense ministers on his strategic review of an eight-year war in which the American-led effort has lost momentum to a tenacious insurgency. The closed-door session — which had not been disclosed in advance — added a note of drama to the sort of NATO ministerial meeting that is often mundane.

“What we did today was to discuss General McChrystal’s overall assessment, his overall approach, and I have noted a broad support from all ministers of this overall counterinsurgency approach,” said NATO’s secretary general, Anders Fogh Rasmussen.

Although the broad acceptance by NATO defense ministers of General McChrystal’s strategic review included no decision on new troops, it was another in a series of judgments that success there cannot be achieved by a narrower effort that calls for not increasing troop levels substantially and focuses more on capturing and killing terrorists linked to Al Qaeda. That counterterrorism strategy is identified with Vice President Joseph R. Biden Jr.

So the question that has been rolling around everybody’s head and is completely unspoken is this; “When is the military going to step up?”

(P.S. Please keep your comments clean and intelligent – no ranting – remember who reads this site!)