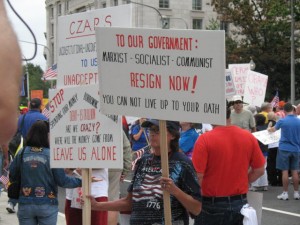 Rep. Steve King is calling for all patriots to jam the Capitol this Saturday, March 20th at 12:00 Noon and shut the city down. When more details become available, I will post them.

This morning I watched Rep. Steve King (R-IA) blast ACORN in the House, asking for a full investigation of ACORN and all of their affiliates.  Rep. King also had some questions for the pResident, and his connections to ACORN.  I am currently trying to find vid of his speech.  The following article is just one facet of what is being uncovered for the rest of America that does not know what we know about ACORN.

Documents released by a Senate Republican on Thursday show that leaders of the ACORN community organizing network transferred several million dollars in charitable and government money meant for the poor to arms of the group that have political and sometimes profit-making missions.

ACORN’s tax-exempt groups and allied organizations, long a target of conservative ire, used more than half their charitable and public money in 2006 to pay other ACORN affiliates, according to an analysis by the tax staff of Sen. Charles E. Grassley (R-Iowa).

On Thursday, Grassley called the transactions a “big shell game” and said ACORN donors may be surprised by how the liberal group known for helping the poor obtain housing and health care was spending their money. He urged the Internal Revenue Service to take a closer look.

According to the Grassley report, charities “are being used to raise monies which are then funneled to other charities or to other organizations for purposes other than what the donor may have intended. . . . Dollars raised for charitable [purposes] appear to be used for impermissible lobbing and political activity.”

Make sure to go over and read the whole article.