Robert Welch; ‘Whatever Else, Call Him Correct’

Whatever you may think of the John Birch Society, founder Robert Welch explains (36 years ago quoting from a 52 year old speech) what is happening right now in our country. It appears that Mr. Welch has an incredible grasp of the problems in our country back then and the course that America was headed for because of progressivism. Is it because he was born in 1899 and lived through the changes happening right before his eyes?

It appears that FoxNews, LLC has “claimed the copyright on their shows“, and has asked YouTube to suspend certain accounts that feature the Beck videos.  Quite an interesting conundrum considering the saudi prince’s investment in the parent company…

I have no idea how long Beck videos will be available for posting.

For those that are suffering from the same “democratic’ delusions as progressive Joe Klein of ‘Time’, watch this video first. America is a republic, not a democracy.

Glenn starts the show explaining the progressive lies about taxing the rich, the Laffer curve, the roaring ’20’s and what we need now – innovation.


Part 3, Beck hammers Joe Klein (we are all dummies):


Part 4, the enemy of the Constitution is the progressive movement. Brian Kennedy, president of The Claremont Institute: 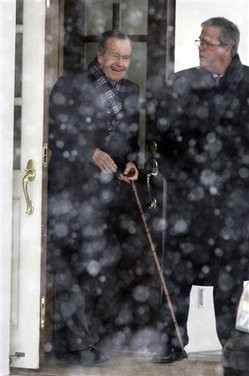 In keeping with the themes of a ‘deficit of trust’, and a new spirit of bi-partisanship; can someone explain this to me, because you know I have questions.

Mysterious Bush-Bush-Obama meeting at the Oval Office this morning

The White House described it as a social call, but feel free to speculate. Jeb Bush’s presence was unexpected — the White House hadn’t said anything about him being invited. It’s all very… bipartisan.

The Bushes were at the White House for just over a half-hour, emerging in a driving snow that over the next few hours will blanket the capital with several inches of fluff.

“Good meeting, good meeting,” the elder Bush, 85 and walking with a cane, said in response to a question called out by a reporter.

This may seem like a silly post, but out-of-the-ordinary events, especially Obama meeting with “progressive” GOP operatives, will always make one eyebrow go up.   Don’t think Bush 41 is a progressive?  What about a ‘New World Order’?

Glenn is interviewing three historians today to garner more information about the progressive movement of the early 20th century and how they are “evolving our society” through education and law. R.J. Pestritto, Burton Folsom, Jr., and Larry Schweikart. I urge you to watch the segments, and check out the books below.


Part 7, Thank you to viewers and the books: