Federal Reserve Pirates Post Another Record Profit; Up 53% From 2009

Not Funny – Approximately half of all American workers make $25,000 a year or less. – The Economic Collapse Blog

In 2009, the Federal Reserve made a record $52.1 billion; a 47% increase over 2008.   They just reamed us again, and don’t even think to tell me that the current $79.3 billion being turned over to the treasury allows any reprieve. Those billions in profit they made were INTEREST ON LOANS…and our government is HOW FAR IN DEBT because of the Federal Reserve ‘Credit Card’, and who do you really think is paying all that interest in the end?  Yep; the producers of the nation.

The vast majority of the Fed’s profit — $79.3 billion — will be turned over to the Treasury Department, with the rest being paid out to member banks in dividends.

A substantial chunk of that profit came from increased interest income from the $1 trillion in mortgage-backed securities the Fed purchased during the financial crisis to help stabilize the housing market. The Fed made $24.4 billion more in interest on those holdings in 2010. The central bank also made $3.5 billion in interest from its increased holdings in Treasury bonds, as it buys up Treasury debt in an effort to boost private lending.

While the Fed is still reaping profits from its intervention into the financial system during the crisis, it is beginning to wind down other areas where it had stepped in. Loans given to insurance giant American International Group, Inc. (AIG) declined slightly in 2010 to $20.6 billion, from $21.3 billion in 2009. As a result, the Fed made roughly $1 billion less in interest on those loans.

For those that still don’t know about the round-robin of looting, moving, and stealing your hard earned cash, here is a simple explanation of the Federal Reserve:

Most Americans believe that the Federal Reserve is part of the government. They are wrong. It is a privately held corporation owned by stockholders. The Federal Reserve System is owned by the largest banks in the United States. There are Class A, B, and C shareholders. The owner banks and their shares in the Federal Reserve are a secret. Why is this a secret? It is likely that the biggest banks in the country are the major shareholders. Does this explain why Citicorp (C), Bank of America (BAC) and JP Morgan (JPM), despite being insolvent, are being propped up by Ben Bernanke and Timothy Geithner? 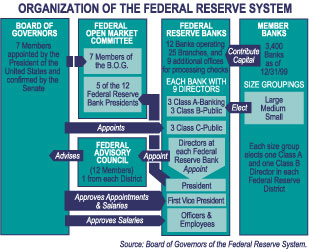 The history of National Banks in the United States has been controversial since the Founding Fathers signed the Declaration of Independence. The Constitution of the United States unequivocally states that only Congress has the authority to coin money, not an independent bank owned by unknown bankers.

Written on January 12, 2010 by DiamondTiger in The Daily Crime, The Federal Reserve

WHAT IS IT GOING TO TAKE TO STOP BUYING THEIR PRODUCT?

Bad Behavior has blocked 1523 access attempts in the last 7 days.