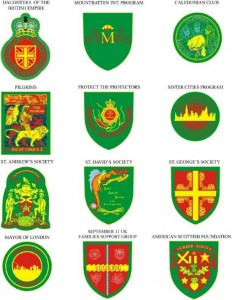 Completely OT, But It Is Amazing What One Stumbles Upon

I started out this post as just an interesting little tidbit of news to go along with other posts that have been written here, and I ended up stumbling on something that set the spidey sense off.  At this point, I do not have a total picture to put forward as I am still researching, but thought this might pique your curiosity.

When I read this news article this morning, I did not even have to wonder about who may be hosting the private reception.  My theory at the time of this writing is, of course, The Pilgrims Society.  As soon as I find confirmation, I will update this post.

The third in line to the British throne will also attend a naming ceremony for the British Memorial Garden in Hanover Square, which commemorates the British victims of the Sept. 11 attacks, and visit the Veterans Affairs Medical Center in Manhattan to meet with wounded veterans.

Harry is also scheduled to attend a private reception in support of New York’s British interests.

When one scroogle’s Pilgrims Society and Prince Harry, a list of different items come up with a few that have to do with the British Memorial Garden, which of course, leads to more questions…

It seems the British Memorial Garden is part of Hanover Square in New York City, and they host a soccer challenge every year.  Here is the headline and link for October-November 2008. Recognize any names?  I found more under 2007’s challenge which was sponsored by AIG with Fortress as a finalist and Deutsche Bank as a semi-finalist.

The Second Annual British Memorial Garden Soccer Challenge was won by Lehman Allumuni who beat Barclays Capital in a very close final match with a score of 16-12.

The Consolation Challenge was won 10-6 by Bloomberg in a hard fought match against the British Consulate’s team, which was decided in extra time.

Following the final matches at Chelsea Piers, teams and supporters travelled to Soho House in a Britsh double decker bus, courtesy of Grayline Tours, for an awards ceremony and celebration at Soho House.

The interesting fact here is that if the BMG is holding a soccer event to raise money for charity or the garden itself, why are the participants all Wall Street types with no other companies represented?

On another note, here is a list of societies for anyone that has the urge to go digging in this direction.

Twelve of New York City’s leading British-American philanthropic societies and organizations joined forces to celebrate the 82nd birthday of Her Majesty Queen Elizabeth II and to raise awareness of the restoration of the 19th c. clipper ship, the Cutty Sark, a project supported by Her Majesty. Thousands of dollars were raised at the event.

And last but not least, go here for an interesting article about bollards and the insignias of twelve of the societies that are linked together with the British Memorial Garden.

The Bollard is the first of fourteen being currently installed in the Park along its perimeter, which bear the shields of the leading Anglo-American societies and government agencies. Twelve of these are shown here…

A Shout Out To Monster Readers!!!!

Quite a few bloggers write posts about landmark moments that occur with their blogs, and also have weekly roundups of stories they have posted.  This particular post was inspired by Sistah Mary Ellen of Bad Habit, who just jump-started her blog this week (go visit), and was pointing out on Shtuey’s Oh..My Valve! how bloggers  are not hearing each other:

Everyone “says” they want to have a discussion, but a discussion can’t come about when each person is so entrenched in their own views and not open to hear or even consider the views of others.

People who seemed to be “normal” to us just months ago, suddenly look like lunatics, and the feeling is mutual from the other side. No one is listening, no one is discussing, it’s like a din of voices talking at the same time–no one listening. It’s as if the blogosphere is a big ol’ empty tube of echoes.

I am so incredibly blessed to have such loyal readers who comment, discuss and actually hear each other.  The best part of this blog has been the fact that each and every one of you have brought something to the table and have not been afraid to say what you think and put your research out there in hopes of sparking a discussion and fueling the desire for the truth.  I never expected this blog to turn into the “research round-table” that it has, and that is due to all of you loyal monster readers!  Sherlock Holmes would be ecstatic about what is occurring here, and I cannot begin to thank you for pushing this blog in the right direction.  Many, many Mahalos!!!

As many of you know, I am a home-schooling mom with a full-time job.  There is just not enough hours in the day for me to read, write and do research.  All of the links and information dropped here helps me help others, and for that I am eternally appreciative.  This little blog, (as of this writing), has posted 856,385 hits and 398,564 visitors since September 2008; and it is because of the monster’s readers.

I want the persons that take the time to grace this page to know that they are the true “Monsters”!  From Lee M. who is a master reseacher with more knowledge about Shariah Finance than is good for any one person to know, to Practical Madman who just dropped the link about the Bird Flu and how it relates back to the Pilgrims Society, to Kathy who posts incredible links to everything, (take a look at this one), to the acidic and truthful commentary that Grail Guardian brings to the table, and Navyvet48 who sends email after email with economic links, to our own resident patriots: Insight Analytical, 1sgboom, California Patriot, 77Jack, Another Patri0t, American Genie, Petunia, NJresident, the admiral, Ron, Cactus Patch, Christmas Ghost, Robert, Lisa, Letty, Paul W, Restore the Constitution, REscotish, LibberTea, Truthisgold, Leaping Spark, MsSparky, bluesky, No Nonsense Nancy, Sandra Miller Linhart, BritYank, RevCirca53, DaddysDarlin, Carrott Top, David Gagin, Tim, Catsden, Jack, Betty, Kristen, Churl, and Sunshinelvr.  If I have missed anyone, please accept my deepest apologies.  Everyone here needs to be acknowledged for their contributions.

This blog is not about conspiracies; this blog is about fact finding missions and discovering the truth and webs of connections behind the lies.  Due to all of the dedicated researchers gathering here, people are realizing that “The Monster” is more about facts than commentary.

I put up this new format a little over a month ago and am still trying to find the time to tweak it and add important features.  Here is your chance to tell me everything right about this page and everything that you think sucks rocks before I spend valuable research time doing housekeeping.  This blog is as much yours as it is mine and I consider your input necessary and valuable.  Have at it monsters and once again, many mahalos for the time you spend here and the donations that The Monster has received to keep it going!

Completely off-topic but I just heard from Navyvet48 (in Kansas) that there are two confirmed reports of this new flu there.  How many of you think that this outbreak is a way to keep the tea parties from happening?

Also, for all of you stopping by that are wondering the how, the why, the what, the when of impeaching the brat in the White House; that post is coming….

Another Thread To The Pilgrims Society

H/T to Practical Madman for the link, there are 11 more videos in the series.  I got to 3:30 where Prescott Bush is mentioned, and y’ll know what that means.   Watch, and once again, you decide.  For those of you that are interested, I have put a drop-down page up top under The Pilgrims Society with all 12 videos.  I am now going back down the rabbit hole….

Go to Obama To Control Internet with link to updated S773.

Go here to read “Jay Rockefeller Is Coming For the Internet”.

When we saw that video, we KNEW they were coming for our means of communication.  For those of you that are just joining the information age, the scenario goes something likes this, and I am paraphrasing as this is by no means the whole time-line.  I know my readers are going to add other important events to the list.

A bill to ensure the continued free flow of commerce within the United States and with its global trading partners through secure cyber communications, to provide for the continued development and exploitation of the Internet and intranet communications for such purposes, to provide for the development of a cadre of information technology specialists to improve and maintain effective cybersecurity defenses against disruption, and for other purposes.

A bill to establish, within the Executive Office of the President, the Office of National Cybersecurity Advisor.

Will Bill Give Obama Control of Internet?

A pair of bills introduced in the U.S. Senate would grant the White House sweeping new powers to access private online data, regulate the cybersecurity industry and even shut down Internet traffic during a declared “cyber emergency.”

Senate bills No. 773 and 778, introduced by Sen. Jay Rockefeller, D-W.V., are both part of what’s being called the Cybersecurity Act of 2009, which would create a new Office of the National Cybersecurity Advisor, reportable directly to the president and charged with defending the country from cyber attack.

A working draft of the legislation obtained by an Internet privacy group also spells out plans to grant the Secretary of Commerce access to all privately owned information networks deemed to be critical to the nation’s infrastructure “without regard to any provision of law, regulation, rule or policy restricting such access.”

And here is an interesting tidbit I ran across while researching Preston Bush, the granddaddy to the crazy Bush 2 that gave us the Iraq War and the Patriot Act.  No copyright infringement here.  It explains how and why the Bush family dynasty was welcomed to the inner circle.  I can already see how this is going to end, and it is not going to be pretty.  We now know the who; the why and the how is becoming more apparent each day.

So fellow Patriots, how do you feel about losing your money, your land, your food, your guns, your means of communication, and YOUR CONSTITUTION?

UPDATE: 4/6/09: Shtuey sent the link and I uploaded it – send it around bloggers (please).

Bad Behavior has blocked 2186 access attempts in the last 7 days.