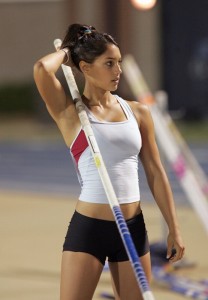 and Mishy, Timmy, and Rahmy are on the list.  Once again a bit of perspective needs to happen.  Yes, this is my short, sweet, snark post to give everybody a break from being herded like cats by an administration that is either hell bent on our destruction or just completely lacking in common sense and brain cells.  I want to know the parameters for People’s little list because Michelle Obama is one of the ugliest women I have ever seen in my life, and yes, I am not posting a picture of her because she makes me more ill than bambi everytime I see her grinning mask of death.

Michelle Obama, who has achieved celebrity status and has wowed the world as a fashion icon, made the list for the first time.

I am still wondering about those parameters after seeing Rahm and Tim’s names on this list.

Here is what you knew was coming; one of the truly most beautiful people in America today, Allison Stokke.  ’nuff said.

At age 15, Stokke won a California state championship, and broke several national records in her age division. As a senior at Newport Harbor High School, she set the second best mark in the nation for that calender year with a 13’7″ vault. In the CIF State Championship finals she finished 4th after a leg injury interfered with her ability to sprint down the runway. After being highly recruited, Stokke now vaults for the University of California at Berkeley. 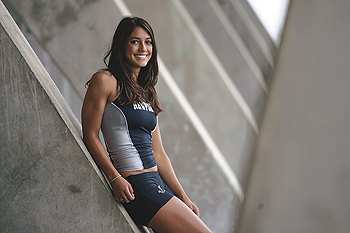