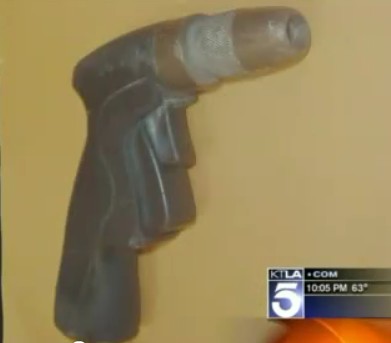 DETROIT — Police who carried out a raid on a family home that left a 7-year-old girl dead over the weekend were accompanied by a camera crew for a reality television show, and an attorney says video of the siege contradicts the police account of what happened.

Geoffrey Fieger, an attorney for the family of young Aiyana Jones, said he has seen three or four minutes of video of the raid, although he declined to say whether it was shot by the crew for the A&E series “The First 48,” which has been shadowing Detroit homicide detectives for months.

Police have said officers threw a flash grenade through the first-floor window of the two-family home, and that an officer’s gun discharged, killing the girl, during a struggle or after colliding with the girl’s grandmother inside the home.

But Fieger said the video shows an officer lobbing the grenade and then shooting into the home from the porch.

“There is no question about what happened because it’s in the videotape,” Fieger said. “It’s not an accident. It’s not a mistake. There was no altercation.”

A&E spokesman Dan Silberman said neither he nor anyone else from the network would comment about the case, and he denied a request by The Associated Press for the footage.

For all those right-wing conservatives and liberal left democrats out there, better take the blinders off to the republicans, democrats, and past administrations.  We all look the same to the paramilitary police.

(CNN) — Police in Detroit, Michigan, on Sunday expressed “profound sorrow” at the fatal shooting of a 7-year-old girl in a police raid.

Aiyana Jones was shot and killed by police executing a search warrant as part of a homicide investigation, Assistant Chief Ralph Godbee said in a statement.

The warrant was executed about 12:40 a.m. ET Sunday at a home on the city’s east side, Godbee said. Authorities believed the suspect in the Friday shooting death of 17-year-old high school student Jarean Blake was hiding out at the home. Blake was gunned down in front of a store as his girlfriend watched, Godbee said. (emphasis mine)