Obama Slides His Rationing Doctor Into Place (Congress Is Obsolete)

Can’t get someone confirmed?  Wait until Congress goes on recess.

Obama to Fill Medicare and Medicaid Post Without Senate Approval

President Obama intends to bypass Congress and appoint Dr. Donald Berwick to head Medicare and Medicaid, the White House announced Tuesday — filling the job while Congress is in recess to get around Republican opposition that threatened to derail Berwick’s confirmation.

Berwick’s supporters say he is the right man in the right place at the right time. But his opponents have lined up against him. They say that while he may be a the highly respected doctor, he is also an outspoken proponent of the British health care system, which they say is all wrong for Americans.

END_OF_DOCUMENT_TOKEN_TO_BE_REPLACED 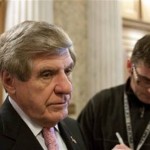 Today’s AYFKM? Award Goes To Ben Nelson For His “The Price Is Right” Vote

The insanity and ‘in-your-face contempt’ of the deal-making going on in the District of Criminals is absolutely appalling to watch.  THIS is healthcare reform when most Americans are completely deadset against it and deals need to be made to buy votes? Are You Freakin’ Kidding Me?

Sen. Ben Nelson’s vote had a hefty price tag; Nebraska will never have to pay for it’s share of Medicaid, ever! That grinds Mary Landrieu’s $300 million into the porch and beyond.

Senator Nelson, you have just played the Price Is Right, and the American people have lost.  I want to personally thank you for handing all of our heads on a platter to the insurance companies who will, once again, have extortion legalized for them through an UN-CONSTITUTIONAL insurance mandate.  I would also like for you to know that if this heinous piece of un-Constitutional legislature passes and gives this administration it’s fascist ‘starter home’, the criminals now voting on legislation in our Capitol better start running for the hills because Americans WILL BE COMING for them.  This will be the last straw…

Sen. Richard Burr (D-N.C.) took umbrage with Nelson, implying that he used his anti-abortion stance to help negotiate a better deal for the state of Nebraska. The manager’s amendment released by Reid on Saturday has Nebraska receiving extra Medicaid funds. In an earlier press conference, the Senate leader called it a “minor point” in winning Nelson’s vote.

“You have to compliment Ben Nelson for playing the price is right,” Burr said. “This isn’t the Louisiana Purchase. This is the Nebraska windfall.”