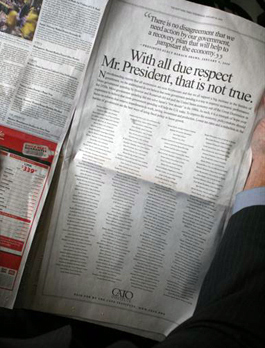 Over 300 economists are saying NO DEAL!

I want to thank Rev. Amy over at Rabble Rouser Ruminations for including a very interesting link in her current post titled  “They Pretend to Work, We Pretend To Pay”.

It seems that we are not alone in believing that the American Recovery and Reinvestment Plan (common sense translation: Bloated Liberal Spending Bill) proposed by Nancy, Harry and Bambi is a REALLY BAD IDEA.

I think everyone should let The Cato Institute know how much we really appreciate them for standing up against the very event that will plunge our country into another Great Depression.  I for one do not feel like being doomed because some people seemed to have failed American History class.

From The Cato Institute:

President Obama says that “economists from across the political spectrum agree” on the need for massive government spending to stimulate the economy. In fact, many economists disagree. Hundreds of them, including Nobel laureates and other prominent scholars, have signed the statement that appears in the Cato Institute’s ad in the New York Times, Washington Post, and in other national publications.