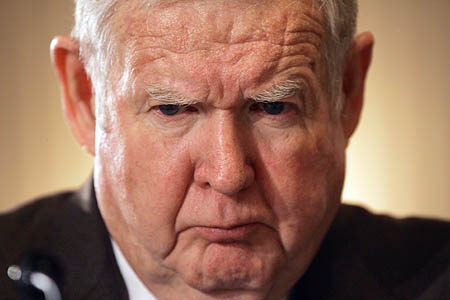 Rep. John Murtha, one of the most powerful members of the House, who served four decades representing western Pennsylvania, has died at 77.

Murtha was the longest serving member of the Pennsylvania delegation – a milestone he passed just this past Saturday. He had been hospitalized in recent weeks with a gallbladder infection, and died Monday afternoon at Virginia Hospital Center at 1:18 p.m., his office said in a statement.

Murtha was Chairman of the House Appropriations Subcommittee on Defense, and from that perch, he controlled billions in Pentagon spending, and was one of the most respected voices on military policy. Murtha was well liked on both sides of the aisle, often holding court in the back of the House chamber in what was known as “Murtha’s Corner.”

Murtha was the first Vietnam War combat veteran elected to Congress, in 1974.