AYFKM? Can Someone PLEASE IMPEACH OBAMA/BIDEN?

With Obama and Biden in charge of transforming the United Socialist States of America, is it surprising that Joe would say that Brussels should be considered the capital of the free world?  How embarrassing it is to have Gumby and GumbyJr. representing us?

“As you probably know, some American politicians and American journalists refer to Washington, DC as the “capital of the free world.” But it seems to me that in this great city, which boasts 1,000 years of history and which serves as the capital of Belgium, the home of the European Union, and the headquarters for NATO, this city has its own legitimate claim to that title.”

What about regular Americans believing that America has been the beacon of light? If it was not true, Islamic Jihadists would not be attacking, and our borders would not be overrun.

Fortunately for us, these two fools appear to have had parents that did not instill that one virtue of keeping some thoughts to oneself.  We always know what they are up to.

CAN WE IMPEACH THESE FOOLS ANYTIME SOON? 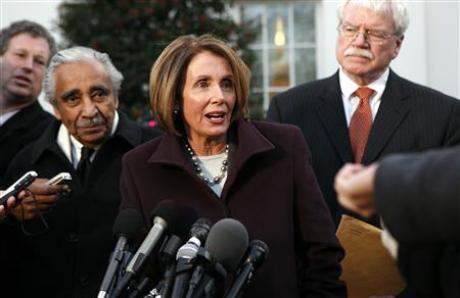 I am still searching for the WaPo story that Politico is referring to.  It appears the White House realizes that even if Scott Brown loses, they actually have an Apollo 13 sized problem.  America has woken up and the movement to toss out incumbents and progressives is growing exponentially.

BREAKING — The Washington Post reports: “The White House and congressional Democrats have reached a tentative agreement to create an independent budget commission. They have also agreed to put the commission’s recommendations on digging the nation out of debt up for a vote in Congress.”

The meeting started at 5 p.m. at the White House. — Kendra Marr

A message for Bob Beckel; the Tea Party Movement is making the difference as much as you would like to spin it another way.

Faced with growing alarm over the nation’s soaring debt, the White House and congressional Democrats tentatively agreed Tuesday to create an independent budget commission and to put its recommendations for fiscal solvency to a vote in Congress by the end of this year.

Under the agreement, President Obama would issue an executive order to create an 18-member panel that would be granted broad authority to propose changes in the tax code and in the massive federal entitlement programs — including Medicare, Medicaid and Social Security — that threaten to drive the nation’s debt to levels not seen since World War II.

The accord comes a week before Obama is scheduled to deliver his first State of the Union address to a nation increasingly concerned about his stewardship of the economy and the federal budget. After a year in which he advocated spending hundreds of billions of dollars on a huge economic stimulus package and a far-reaching overhaul of the health-care system, Obama has pledged to redouble his effort to rein in record budget deficits even as he has come under withering Republican attack.

The commission would deliver its recommendations after this fall’s congressional elections, postponing potentially painful decisions about the nation’s fiscal future until after Democrats face the voters. But if the commission approves a deficit-reduction plan, Congress would have to act on it quickly under the agreement, forged late Tuesday in a meeting with Vice President Biden, White House budget director Peter R. Orszag, and Democratic lawmakers led by Senate Majority Leader Harry M. Reid (Nev.), House Speaker Nancy Pelosi (D-Calif.) and House Majority Leader Steny H. Hoyer (Md.).

Some Democrats, particularly in the House, where leaders have long resisted relinquishing their authority over taxes and spending, are also less than optimistic. Under the agreement, the commission would have 18 members, including six lawmakers appointed by congressional Democrats and six lawmakers appointed by congressional Republicans. Obama would appoint six others, only four of whom could be Democrats.

Fourteen commission members would have to agree on any deficit-reduction plan, a prospect that skeptics called a recipe for gridlock because action would depend on the support of at least two Republicans for a plan that is sure to include tax increases. Meanwhile, many influential interest groups — including some unions and AARP — have lined up in opposition to giving an outside commission power to cut federal spending and are likely to pressure Democrats to resist sharp budget cuts.

This should be interesting….

The ‘Cuda Responds To The Gaffe Machine

Joe must be thinking that he isn’t getting enough face time with the MSM.  Why else would he even approach the idea of taking on the Artic Fox, let alone do it?  This almost qualifies for Today’s AYFKM? Award, but then again, the day is young yet, and in this upside-down world, I expect anything could happen.

As the vice president knows, I have always advocated an all-of-the-above approach to American energy independence. Among other things, my alternative energy goal for Alaska sits at 50 percent because Alaska reached more than 20 percent during my term in office. The Obama-Biden administration, on the other hand, recently announced a renewable goal of only 25 percent. However, domestic drilling should remain a top priority in order to meet America’s consumption and security needs.

The vice president’s extreme opposition to domestic energy development goes all the way back to 1973 when he opposed the Alaska pipeline bill. As Ann Coulter pointed out, “Biden cast one of only five votes against the pipeline that has produced more than 15 billion barrels of oil, supplied nearly 20 percent of this nation’s oil, created tens of thousands of jobs, added hundreds of billions of dollars to the U.S. economy and reduced money transfers to the nation’s enemies by about the same amount.”

This nonsensical opposition to American domestic energy development continues to this day. Apparently the Obama-Biden administration only approves of offshore drilling in Brazil, where it will provide security and jobs for Brazilians. This election is about American security and American jobs.

There’s one way to tell Vice President Biden that we’re tired of folks in Washington distorting our message and hampering our nation’s progress: Hoffman, Baby, Hoffman!

The electoral bitchslap that the Progressive Socialist Democratic Party has been so deserving of for so long is about to happen.

Are you going to the Capitol steps to meet Michelle Bachmann this Thursday at noon to protest the Pelosi Pink Unicorns are going to pay for Healthcare Insanity?

YOU HAVE GOT TO BE KIDDING ME!

“Everybody misread the economy….”

Sorry Joe, the Monster and millions of American Patriots did not misread the economy; we screamed NO TARP, NO BAILOUTS, NO STIMULUS and what did we get? Rising unemployment.  We told you to cut taxes on Americans and small businesses.  Did you do that? NOPE!  You saved your contributors in the financial and insurance industries and let us swing in the wind.

2010 is looking more and more interesting.  Readers?  Have you changed your party affiliation to “No Party” yet?

I Swear They Are Morons…

Watch this video and then tell me what you think.

Okay, Biden is just as much of an idiot child as his master.  I guess when the Congress can give themselves a raise when everybody else is feeling blessed to still have a job, then we must have been imagining that possible layoff, our empty refrigerators, empty gas tanks, empty space under the Christmas tree and that the economy is tanking 500,000 jobs a month, and need Biden to inform us now of the fact that it is really, really, bad.  What do you think is going to happen when they print ONE TRILLION DOLLARS with nothing to back it up?  How is the economy and inflation going to fare then?

I swear they are living in an parallel universe that only intersects with the rest of the country every blue moon.

I swear they are morons!

P.S. More on those greedy bastards on The Hill later….

Bad Behavior has blocked 2288 access attempts in the last 7 days.