This should be interesting….

“I came to Washington to be an independent voice, to put politics aside, and to do everything in my power to help create jobs for Massachusetts families,” Brown said in a statement. “This Senate jobs bill is not perfect. I wish the tax cuts were deeper and broader, but I voted for it because it contains measures that will help put people back to work.”

Democrats needed to poach Brown and and least one other Republican to reach the 60 votes necessary to votes. Centrist Republican Sens. Susan Collins (Maine) and Olympia Snowe (Maine) also voted for cloture on the proposal.

Brown was elected to the Senate with the backing of conservatives largely because of his pledge to serve as the 41st vote to uphold a filibuster of the Democrats health reform bill.

But Brown has expressed willingness to work with Democrats on other issues.

For those that wish to watch the proceedings on C-Span2, go here. I am looking for the bill number and text right now.

H.R. 2847 – Hiring Incentives To Restore Employment Act,  (not to be confused with the original H.R. 2847 – Commerce, Justice, Science, and Related Agencies Appropriations Act, 2010.  Don’t you just love how they slip language in and take other language out because the original was already on the schedule?

Dear Mr. Leader:
The Congressional Budget Office (CBO) and the staff of the Joint Committee on Taxation (JCT) have prepared the enclosed table showing the estimated effects on revenues and direct spending for the Hiring Incentives to Restore Employment Act, as introduced in the Senate on February 11, 2010. The legislation has been introduced as Senate
Amendment 3310, in the nature of a substitute for H.R. 2847.
The legislation contains several tax provisions, including temporarily exempting from payroll taxes paid by employers the wages of certain individuals hired in 2010, providing an additional business tax credit for firms that retain such individuals for at least one year of employment, increasing allowable expensing in 2010 for certain depreciable business assets, amending the treatment of interest paid in connection with issuances of certain tax credit bonds, and modifying rules applicable to foreign accounts and the allocation of interest expenses on the part of corporations with worldwide activities. In addition, the legislation would extend through December 31, 2010, the authorization for surface transportation programs and would increase the budgetary resources for those programs by $20.8 billion in fiscal year 2010 and $12.2 billion in fiscal year 2011, relative to the amounts assumed in CBO’s baseline. Finally, the bill would provide for the transfer of $19.5 billion from the general fund of the Treasury to the Highway Trust Fund. Spending from the trust fund, however, is generally controlled by appropriation actions; as a result, the transfer may facilitate future spending but would not, by itself, increase such expenditures. 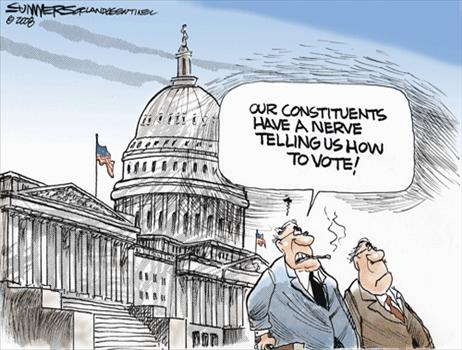 No, no, no, no,….they kept saying.  Nope, we aren’t doing another stimulus package, we are just doing some job creation.  No, no, no….that first (dem) $787 Billion is not actually $3.27 TRILLION.  No, no, no….we aren’t even thinking about more stimulus, just a neat, little, tidy jobs bill.  Yes, we know we started writing our second stimulus bill back in March, but we did not think you were watching.  Why ever are you paying such close attention?  Are you a domestic terrorist?  Do we need to put your ass on a watch list?  You want us to do what?  Answer our phones?  What is the country coming to when we take calls from our constituents?

We are the Democrats and we are here to say “Yes, We Can!” save America from itself, and you know we would never lie to you, the American people.

So here we are on the brink of losing even more American wealth pennies and nickels (which was the plan all along), with the congress being pushed by the Treasury (Turbo Tax Timmie) to raise the country’s credit card limit raise the debt ceiling to something over the current $12 Trillion, China concerned with our unsustainable debt, more jobs continuing to be lost because the government saved the banks and not the small businesses who did the work and earned the money to put in the banks, and Obama’s numbers are tanking because of the ‘job-free recovery’, AND THEY ARE GOING TO RACK UP THE CREDIT CARD EVEN MORE?  What happens when The Fed raises interest rates?

The pushback came a day after House Speaker Nancy Pelosi suggested more stimulus spending might be needed, and the top Democrat on the Appropriations Committee said he had already instructed his staff to begin working on a bill.

But multiple Democratic aides told CNN another stimulus plan is not in the works, and that Democratic leaders believe they need time to assess whether the first recovery package is effective before taking up another bill.

One leadership aide said House Appropriations Chairman David Obey of Wisconsin got ahead of himself when he told CNN Tuesday evening that his committee was considering another stimulus package, though he had cautioned there was no timeline for moving it.

WASHINGTON, June 23 (Xinhua) — U.S. President Barack Obama has said that he does not think a second economic stimulus package is needed yet even though the nation’s economy continues to struggle.

More time is needed to assess the effectiveness of the 787-billion-dollar economic stimulus plan, the administration’s first one, enacted early this year, Obama told a press conference held Tuesday in the White House.

Senate Majority Leader Harry Reid on Tuesday slammed the door on the idea of a second economic stimulus plan, even as President Obama suggested he’s leaving the option on the table.

The Nevada senator said Americans are only just beginning to realize the benefits of the Obama administration’s first stimulus bill, which passed in mid-February, and he stressed that only 10 percent of the $787 billion package has made it to the states.

“A little less than 90 percent still needs to be put out to the American people, and we’re in the process of doing that. It’s going to move more quickly now. As far as I’m concerned, there’s no showing to me that another stimulus is needed,” Reid said emphatically.

Treasury Secretary Tim Geithner says the Obama administration’s $787 billion stimulus package has worked well, so a second one is unnecessary.

“The combined effect of stimulus. . . and the efforts we took to stabilize the financial system . . . have been remarkably effective in arresting the freefall in economic growth,” he told CNBC.

To be sure, some additional steps are necessary, such as an extension of unemployment insurance, Geithner says. But he doesn’t see justification for a second stimulus.

Geithner also says taxes won’t rise for most Americans, although he dodged a question on the soon-to-expire Bush tax cuts.

President Obama plans to hold a White House forum on job creation next month, an attempt to signal his concern about the growing ranks of the unemployed and build consensus on future action to stoke the economy.

“We all know there are limits to what government can and should do even during such difficult times,” Obama said at the White House before leaving on a nine-day trip to Asia. “But we have an obligation to consider every additional, responsible step that we can to encourage and accelerate job creation in this country.”

WASHINGTON — House Democrats are looking at swelling deficits further, at least temporarily, on a jobs-producing bill in response to double-digit unemployment and a sense within their ranks that the party needs to do more to put people back to work.

But many of the ideas on the table so far are extensions of last February’s $787 billion economic stimulus package — such as unemployment benefits and subsidies to help the jobless pay for health insurance. They maintain the social safety net for the 15.7 million Americans out of work but they don’t directly create new jobs.

Aware that the February stimulus bill has not prevented unemployment from reaching 10.2 percent and of public opinion polls showing the free spending measure is losing popularity with voters, Democrats are wary of putting a stimulus label on their new package.

“I wouldn’t characterize it as a second stimulus,” House Majority Leader Steny Hoyer said Tuesday. “I don’t want to be as broad as that, I want it to be very targeted on jobs.”

“We all know there are limits to what government can and should do even during such difficult times,” Obama said at the White House before leaving on a nine-day trip to Asia.”


AYFKM after everything the spineless-in-chief has done to nationalize the entire economy through industry after industry takeover, and which continues as we speak? (Financial Regulation Reform)


Liars and thieves.  I am sick to death of politicians that no longer answer their phones for their constitutents, who seem to think that the taxpayers are losers and not worthy of an opinion, and both parties lying about what they are doing.

Bad Behavior has blocked 2091 access attempts in the last 7 days.