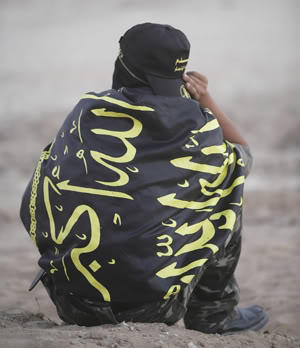 Now it’s getting scary when I agree with John Bolton. In my area some guy from C.A.I.R. is going around to Christan churches and trying to recruit people to Islam. My meetup group went to one the other evening and asked questions of him. You had to be registered to go and I didn’t make it because I beleive they had a quota as to how many they could handle. I spoke with an individual who attended and she said that they were outnumbered and very much harassed and intimidated. This was by members of the local Friends Meeting House group, which are Quakers. There are other of these meetings scheduled. We are going to go to more, hopefully I will get in on the next one. The lady who I have been in contact with is holding a meeting in her home this week to educate people on Islam so that we will be more able to ask pertinent questions. this is in a rather rural area in Southeast PA. Imagine what they must be doing in the bigger city areas? She told me that he was definitely pushing for sharia law in this country and doing away with our constitution. This is despicable! I am going to do whatever I have to to stop this. – Monster Reader


One of the Monster’s readers left the above comment about a 10-week class titled “”Understanding Muslims and Islam” being sponsored by Downingtown Friends in Chester County, PA starting on January 7th, 2010.  When it finally hit me how important this indoctrination is to the furtherance of shariah law, I started digging and found that it has been going on for years, and I have spoken with a Tea Party Patriot that has attended the first seminar (details below).  The instructor for the class is Iftekhar Hussain, co-founder and the chair of the Pennsylvania chapter of CAIR (Council on American-Islamic Relations).  The very same organization with ties to Hamas through the Holyland Foundation.

Iftekhar is the Chairperson of the CAIR PA Board of Directors and a member of the CAIR-PA Philadelphia Chapter Executive Committee. He is also currently serving as Secretary General of the American Muslim Society of the Tristate Area of PA, NJ & DE and has served on the advisory committee of the American Friends Service Committee, Middle East Peace Building Unit.

He is engaged in local interfaith educational initiatives with a focus on ‘Islam and the Middle East’ and ‘US Foreign Policy and the Muslim world’. On behalf of CAIR-PA, he has developed a 10-part course titled ‘Understanding Islam and Muslims through History and Jurisprudence’ and has taught it at churches, synagogues, mosques and local county night schools. He has presented this course at over 25 different venues over the past 6 years.

Iftekhar serves as Friday prayer service leader at suburban mosques in the Delaware Valley. He has started and volunteered for PA and TX Muslim community organizations at the board level and executive committee level. He has also worked with national Muslim organizations as consultant for local work and representation and has represented local Muslim organizations at the national level. Under contract, he has led a process improvement study and implemented a process improvement plan for an Islamic educational foundation in the Delaware Valley.

Iftekhar was born in Bangladesh, has lived in the Middle East and Europe and studied in Texas obtaining a Bachelors and a Masters at Texas A&M University and worked toward a PhD at Penn State University. He works as a consultant in the Pharmaceutical industry, traveling in Asia Pacific and Europe on corporate business process re-engineering assignments.

The money quote from an article in the Daily Local News from January 23, 2009:

Hussain, who moved to the United States from Bangladesh 26 years ago, has been teaching classes in the Delaware Valley area for the last 6 or 7 years, he said. He helped found CAIR, the Council on American-Islamic Relations, Pennsylvania chapter. Part of the nonprofit’s mission statement, Hussain said, is to educate and help spread the true ideas of Islam, especially in a post Sept. 11, 2001, world, where he believes Muslims face discrimination. “We address this issue through education.”

This is the same person pictured center in the photograph below who is seen giving an award to Muzzammil Hassan of Bridges TV who later chopped off his wife’s head when she filed for divorce (2.17.2009). I haven’t yet been able to ascertain what exactly happened to Mr. Hassan as no new news reports have surfaced.

A Muslim TV network founder who has been charged with beheading his wife was the recipient of an award from the controversial Council on American-Islamic Relations, the self-described Muslim civil rights group that boasts of its influence on U.S. government policy.

He received an award April 7, 2007, from CAIR-Pennsylvania at its first annual banquet, a fundraiser at the Hilton Philadelphia. CAIR-PA Chairman Iftekhar Hussain and CAIR National Chairman Parvez Ahmed presented the award to Hassan. The organization website does not specify a reason for the honor.

“The American-Muslim community is a wonderful community and they have my strong support,” Sestak said in a statement. “They are among our District’s leaders, and among other things, have contributed to the success of businesses, educational institutions, interfaith circles and the health sector. Their participation in civic life is indicative of the great diversity and tolerance of this nation.”

Are you hearing this Pennsylvania? Ed Rendell and Joe Sestak as guests and promoters of CAIR.

According to a Council on Foreign Relations report, David Powers, a professor of Islamic law and history at Cornell University, explained that the Quran permits men to use physical force against disobedient wives in some circumstances. A woman may ask for divorce, but only a man can grant her request.

“Classical Shariah lays out very limited conditions under which a woman can divorce a man – he must be infertile at the time of marriage; insane; or have leprosy or another contagious skin disease,” the CFR report states. “Most Islamic nations, including Egypt and Iran, now allow women to sue for divorce for many other reasons, including the failure to provide financial support.”

Some of the individuals behind Bridges TV include:

CAIR’s communications director, Ibrahim Hooper, said Bridges TV “is just an example of the growing maturity and sophistication of the American Muslim community that people are even at this stage where we can contemplate this kind of network.”

Here is the announcement about the current 10-week session in The Daily Local News of Chester County on Christmas Day, 2009:

The Downingtown Friends Meeting will offer a class on “Understanding Muslims and Islam” through their culture and its religion in January.

The program is free and open to anyone who wants to learn more about Muslims and their culture.

It starts Jan. 7 and will be held on successive Thursday evenings for 10 weeks. The class will run from 6:30 to 8:30 p.m., said Terry Schultz, a member of Downingtown Friends Meeting’s Peace and Social Concerns Committee, which organized the course.

“The course will approach Islam from a historical and jurisprudent perspective, covering the foundation of the religion and building on the political and economic,” said Schultz, who had earlier attended the classes at another church and found them helpful in understanding the Muslim world.

Teaching the class is Bangladesh native Iftekhar Hussain. He has been conducting this class for about six years, he said. He will discuss topics such as the religious text, the Koran, theology, religious beliefs and Muslims’ relationship with Christians and Jews.

“It is really to help the individual person understand the sources and the traditions that form the Muslim world and help them understand who Muslims are,” Hussain said. “When there is familiarity, it removes doubt, removes uncertainty, removes hate. It provides a level of comfort. I continuously compare the Christian and Jewish religions with how Muslims have the same traditions and values.”

Hussain said when he teaches the course, he strongly encourages his students to ask any kind of question they want, regardless of the subject. “Our goal is to create a level of familiarity that begins to remove the many stereotypes that exist in people’s minds. It also allows people to really ask questions. It’s a really interactive course. They want information but then they want to ask questions from their context.”

I have spoken to a source that has attended the first meeting and will be attending as many as is allowed.  Though my source wishes to remain anonymous to the general internet public as attendance in the program is ongoing, I have permission to connect bigger publications than the Monster with this source.

The attendee has stated that there were at least 75 people at the meeting, and that it was remarked by the instructor that it was twice the usual amount of people. This first session covered the Bible, the Koran, the Torah and how they are inter-related.  My source also reports that Mr. Hussain stated point blank that he wants shariah law here in the United States.  Mr. Hussain then asked for ten people to ask questions that would be fully explained through the course of the program.

I will bring you further reports as the program progresses.

Lawsuit Against Geithner And The Fed Allowed To Proceed (federal constitutional challenge to the use of taxpayer money to fund AIG’s Islamic religious activities.)

Iftekhar Hussain. A PEARL FOR PENSYLVANIA!