This is going to seem like a really boring post, but somebody besides Market Ticker has to keep track of our money being torched right before our eyes (and against our will).

In all the hubbub of House Call rallies, stealth healthcare votes at 11:15pm on a Saturday night, Barney Frank being present when his partner was arrested on pot charges, and the kenyan communist the pResident insulting the families and the memories of the islamic jihadist murdered soldiers at Ft. Hood, y’all might want to know that the people that want to run your healthcare delivery system with 118 new agencies are still backing the two mortgage lenders and guarantors who just lost $25.2 Billion of our money and now want more.

NEW YORK (Reuters) – Freddie Mac (NYSE:FRE – News; NYSE:FRE – News), the second largest provider of U.S. residential mortgage funding, on Friday posted a loss of $5 billion in the third quarter and predicted it would need more government support amid a “prolonged deterioration” in housing.

Increases in the value of securities Freddie Mac held over the period helped buoy its net worth, however, erasing its need to tap government funds for a second straight quarter to stay solvent while continuing to buy and guarantee home loans.

Including a $1.3 billion dividend payment on senior preferred stock bought by the Treasury in previous quarters, Freddie Mac’s third-quarter loss increases to $6.3 billion.

The home funding company’s loss comes amid a rise in provisions for credit losses to $7.6 billion in the quarter, up 46 percent compared with the previous quarter, as delinquencies worsened on loans it guarantees. Provisions will remain high this quarter, it added.

“I would say we are just beginning to see the impact of the chargeoffs on their guarantee book,” said Janaki Rao, vice president of mortgage research at Morgan Stanley in New York.

Its larger rival Fannie Mae (NYSE:FNM – News; NYSE:FNM – News) on Thursday said it would need $15 billion from the U.S. Treasury after a whopping $18.9 billion third-quarter loss.

Results at Freddie Mac and Fannie Mae are widely watched as a barometer of the U.S. housing market since they own or back nearly half of outstanding mortgages. (emphasis mine)


The losses have presented a dilemma to Congress as it wants to protect taxpayers’ money but is also counting on the companies to undertake foreclosure prevention efforts which are significantly adding to expenses.

If Congress, and in this case, the Democrats, wanted to protect our money, they would not be giving it away in tankerfuls to every tom, dick, and peggy the moocher.

In order to ease the terms of loans under the Obama administration’s Making Home Affordable refinancing program, the companies must buy the mortgages out of securities, and write down their value. Seeking alternatives to foreclosures also means bad loans sit on their books longer.

This is where Deed-To-Lease from Fannie Mae comes in.  The government is about to become your landlord and take care of all those pesky household maintenance issues right alongside your gall bladder operation. Lovely.

Despite signs of recovery in home sales and prices, rising delinquencies and unemployment levels mean the housing market is still fragile, Freddie said. High unemployment, foreclosures and excess inventory will impede the recovery “for some time” and push house prices lower, the company said.

Could it possibly be the rising unemployment, now at 10.2%, has something to do with rising delinquencies?

This means that Freddie Mac’s survival will continue to depend on support from the government, which forced the company and Fannie Mae into conservatorship in September 2008.

Freddie Mac has taken $51.7 billion since then while Fannie Mae’s draw will rise to $60.9 billion.

What’s $112.6 Billion compared to Nancy Pelosi’s red crayon math which states that the new healthcare bill will only cost $894 Billion?  We all know it is going to be more like $15 TRILLION.

To close on a lighter note; the Dems just hanged themselves with that House healthcare fiasco. 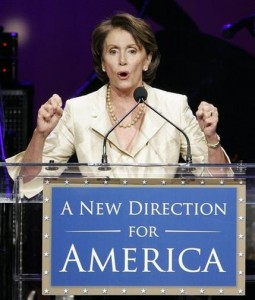 Dems To Walk The Plank For Pelosi Healthcare On Saturday

Desperate times call for drastic measures.  Case in point; rushing the largest un-Constitutional expansion of government in the history of the United States on a rare Saturday vote.  Are any of us surprised?  Nope.

Nancy Pelosi does not have the votes in the house yet to pass her gargantuan 2,000 page monstrosity that very few people have actually been able to read in it’s entirety…so…it is time to pull out all the stops and descend even farther into the pit of backroom arm-twisting, media spin, Chicago style thuggery, and whatever else passes for statesmanship these days in Washington, D.C.

Does one single democrat realize how much their party is degrading the reputations of the Presidency, the House, the Senate, and America in general?  Does one single democrat realize how much their tantrums, name-calling, and sneaky backroom maneuvering is traumatizing the entire nation, and more than likely, giving our allies in the world a moment of pause? Does it make it morally right for the democrats to plunge into the depths and follow the lead of squishy republicans with no moral compass just because Bush and the republicans did so earlier?

All of this speaks to the corruption and greed that has taken over OUR government when Nancy can call a special vote with the implications that ‘it’s legal’, even if it is not the ‘morally right’ thing to do.  I know many thoughtful Americans that take longer than the congress has taken with this healthcare manifesto to make decisions on choices that are much less life altering.

Aren’t you glad that Nancy, lacking grace, statesmanship, intelligence, and the maturity of thought and character to do what is right, is third in line for what is left of the presidency right after Joe Biden who believes that we have to spend trillions of dollars to keep from going bankrupt?  If anybody really looks at the people in charge, one would have to say America is definitely in decline with the amount of spoiled brats running around D.C. doing whatever they please without even a “by your leave” to the American People.  See Alan Grayson’s juvenile antics if you need a refresher.

Fortunately, for us, there is a “Healthcare Intervention” about to happen today on the Capitol Steps at Noon with Rep. Michele Bachmann, Jon Voight, Mark Levin, various Republicans and, (hopefully thousands), highly upset Americans to stop THE DEFINING MOMENT when our country is catapulted from capitalism to socialism.  That is, if Nancy does not pull some special brand of ‘Speaker Of The House’ thuggery and change the security protocols outside the Capitol and BLOCK AMERICANS from their OWN HOUSE.  One can hope that Nancy does not do something THAT lacking in little gray cells.

House leaders put in motion the machinery to hold a rare Saturday vote on the most far-reaching expansion of the health-care system in more than 40 years.

Even so, they were still locking down support Wednesday among a handful of holdouts, with the biggest bloc dissatisfied with the measure’s handling of abortion.

Many Democrats said passing the measure has become even more crucial politically after Republicans won governor’s races in Virginia and New Jersey this week. So Democratic whips worked their rank and file, while House leaders tried to secure a momentum-building endorsement from the AARP, the nation’s largest association of people over 50. President Obama, meanwhile, laid plans to visit Capitol Hill on Thursday or Friday to address House Democrats in a final push for his signature domestic initiative.

House Republicans are united in opposition to the majority’s health bill, so to pass the measure, Democrats will need at least 218 votes from their 258-member caucus. That group grew by two in Tuesday’s elections: While some Democrats bemoaned the loss of the governor’s mansions, House Speaker Nancy Pelosi (Calif.) cheerfully prepared to swear in newly elected Democrats from New York and California, both of whom have pledged to support the health bill.

“From our standpoint, we picked up votes,” Pelosi said.

House leaders said that they were confident of reaching their goal in time for a Saturday debate on the most significant changes to the nation’s health-care system since the creation of Medicare in 1965. They released 42 pages of amendments to the 1,990-page health package unveiled last week, a move that started the clock ticking on their pledge to make the legislation publicly available for 72 hours before lawmakers are asked to pass judgment.

“We are now in the final stage of moving this critical bill through the House,” Majority Leader Steny H. Hoyer (D-Md.) said in a statement. “Our members have worked very hard on this legislation, and I believe that as a result, we have a strong product that will lower costs and provide greater health care stability for all Americans.”

Unless, of course, you live in Hawaii.

Is this guy freakin kidding us? Is New Jersey going to fire this senator that took an oath to uphold and protect the Constitution, and is surely not following it’s principles.

I sure as hell hope so!  Senator Menendeze receives the Today’s AYFKM? Award for once again showing that he is either too stupid to serve or too dangerous to serve.

An influential senior Democrat on the Senate Finance Committee is withholding support for his party’s recently drafted healthcare reform bill because illegal immigrants won’t benefit under the plan.

The only Hispanic in the U.S. Senate, New Jersey’s Robert Menendez, doesn’t like the way illegal aliens are treated in the bill, recently released by Finance Committee Chairman Max Baucus, and refuses to vote for it until changes are made. This could create a huge problem, according to the congressional newspaper that broke the story, because Menendez has considerable leverage and may represent the committee’s deciding vote.

Specifically, Menendez objects to the portion of the bill that forbids illegal immigrants from buying health insurance through newly created exchanges that will be set up to cut costs. The senator, once among the highest ranking Democrats in the U.S. House, has joined forces with Hispanic advocacy groups that have denounced the proposed measure’s emphasis on legal and illegal immigrants.

Menendez is also concerned that, under the bill, families made up of both legal and illegal residents won’t be treated fairly because they can’t purchase reduced-premium insurance from companies participating in the new exchange. That means they would be forced to pay much higher prices for private coverage than legal residents.

Indeed the drafted bill says that families that include illegal immigrants will receive lower federal subsidies than those without. That means that the income of an illegal alien will be counted when assessing a family’s federal aid although the illegal immigrant will not be eligible for healthcare subsidies. This concerns Menendez terribly, though changing it would put him at odds with the White House.

President Obama has steadfastly maintained that his healthcare plan will not help illegal immigrants, although some aren’t buying it. A few weeks ago a Republican lawmaker made worldwide headlines for shouting out “You lie!” after Obama told a joint session of Congress that illegal immigrants will not be insured when his overhaul takes effect. That will certainly change if Menendez has his way.