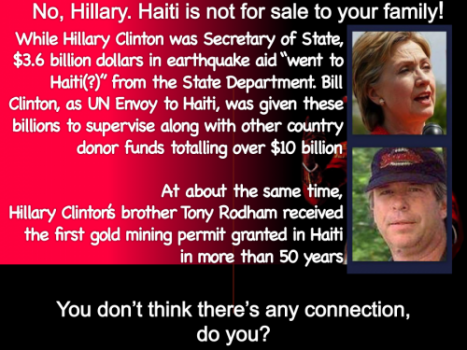 As I look back on the TRULY WASTED EIGHT YEARS of lyin’, golfin’, arrogant Obama ‘managing America’s decline’, I realize that it wasn’t so much a management of the decline as a lulling of the populace into demoralized submission to our new global overlords (Central Bankers, United Nations, Multi-Nationals via TPP, etc.) whose public face is the one and only, never to be forgotten for her multiple media blacked-out and shadow government covered war crimes, Hillary Rodman Clinton. A more loathsome sub-human is yet to walk this planet, IMHO. As she has looted the poor island nation of Haiti from the devastating earthquake 6 years ago to her continued looting by using the Clinton Foundation to funnel money into her personal coffers via the latest hurricane tragedy, we are now looking at a possible future for America with the ‘walking dead’, wicked witch, perpetual thief, liar, and murderer as our president. I have met and known sub-humans as evil as Hillary Clinton, but none of them had this kind of power for this amount of time with the possibility of nuking the entire planet as some kind of personal vendetta or blood sacrifice. Also, none of them had the unbelievable ability to make the lies, subterfuge, and absolutely insane ideas (late term abortions) seem so reasonable and rational as the beast in the oven mitt. END_OF_DOCUMENT_TOKEN_TO_BE_REPLACED 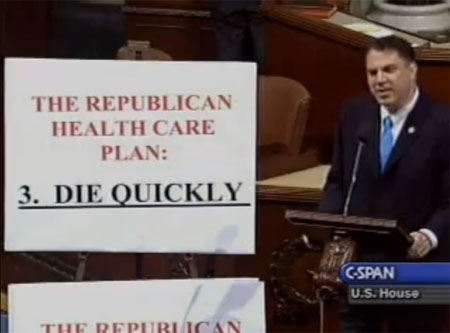 AYFKM? We Are Paying Alan Grayson For This?

AYFKM?  Our tax payer money for this?  Florida; can you do something about this?  Focus on healthcare, deficits, over-blown government spending?  Nope – Haiti, Pat Robertson, and republicans’ ‘pact with the devil’.

Just for contrast, a breath of fresh air, and because I know my readers enjoy this gentleman’s speaking style as much as I do; Daniel Hannan. Can we draft this fellow?