Gordon Brown is stepping down.

GORDON Brown has sensationally revealed he will quit as Labour leader.

In a speech outside 10 Downing Street, the PM said his party will elect a new leader by the time of its next conference in September.

But, he said, he will not stand or back any particular candidates.

He added he would take the blame for losing Labour’s majority at the election.

The PM also revealed Lib Dem leader Nick Clegg has asked Labour to enter into “formal negotiations” on forming a government, and he said it was “sensible and in the national interest” to respond positively to the request. 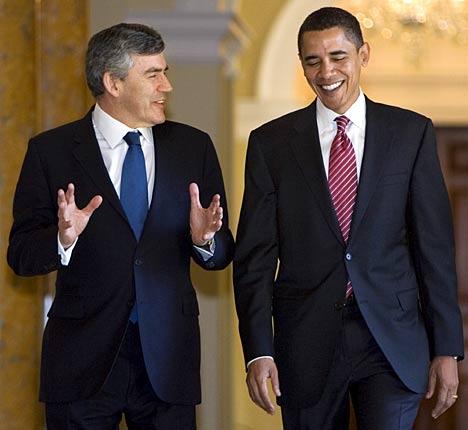 Please listen to the entire 4 minutes; paying attention to words like ‘progressive’ and ‘radical’.  Then keep in mind we fought a revolution to get away from these guys, and because we no longer have a president worthy of respect, the world is starting to burn.  How do you feel, as an American, taking orders from Gordon Brown?

We should see social mobility as the modern route to social justice.  And we should devise together the radical measures that will massively accelerate the social mobility in our societies.  And fourth, with globalization, we have a unique chance to recognize our global interdependence as citizens, and work toward a truly global society.  And that is a world free from climate change catastrophe, it’s a world free from terrorism, and a world where we tackle poverty, disease, illiteracy, and inequality.

That was quite a “living in my little pony world” statement, doncha think?  I wonder if the islamic jihadists are going to allow Gordon Brown to live as an infidel?

Together, I think these proposals are the modern, progressive way of achieving our historic goals of economic progress, social justice, environmental care.

UPDATE: I couldn’t just leave twitmo up there all by himself.

(I forgot to add my usual question;

Can We Impeach Obama Yet?)

…or…Another One Bites The Dust.  Gordon Brown’s administration is imploding and calls for his resignation are getting louder.  Do you think our Congress will pay attention when the british government collapses because their treasury is empty because of Gordon Brown’s “stimulus” spending, and slow down the freight train of printing, spending and debt that is going to collapse our economy if it does not stop?

Another minister in Gordon Brown’s cabinet resigned — and also called for the U.K. prime minister himself to quit — as the Labour Party braced for a poor showing in local and European elections.

U.K. voters cast ballots Thursday for both local offices and spots in the European Parliament, with a focus on the question of how well — or how poorly — the ruling Labour Party, headed by Mr. Brown, will fare. It’s the last U.K.-wide electoral test ahead of a general election which must be called before next June, and Mr. Brown’s party has been forecast in some recent polls to finish third or even fourth in both elections. That would add to pressure for the prime minister to step aside amid frustrations with the U.K.’s recession and a series of scandals.

As polls closed at 10 p.m. in London on Thursday, Mr. Brown received another rude shock, this one from a member of his own cabinet. U.K. Work and Pensions Secretary James Purnell resigned from the post and called on Mr. Brown to step aside for the good of the Labour Party.

Mr. Purnell became the third member of Mr. Brown’s cabinet to quit in as many days — but the first to openly call for the prime minister to quit. While not the biggest name in the cabinet, Mr. Purnell has been seen as a rising star.

“I now believe your continued leadership makes a Conservative victory more, not less, likely,” wrote Mr. Purnell in a letter to Mr. Brown. The opposition Conservative Party has surged ahead of Labour in opinion polls in recent months. Mr. Purnell added: “Calling on you to stand aside to give our party a fighting chance of winning” in the next general election.

Barack Obama IS NOT AMERICA!

I have been following odds, ends, bits and pieces; and though I had heard about the rude manner in which the Usurpers in Charge handled the British Prime Minister the other day, I  had not taken a moment to find out exactly what happened, other than to note that the WH was rather rude to Mr. and Mrs. Brown.

First, for our brethren across the pond, I want to hang my head in shame and apologize for those two freakin’ wankers in the White House who treated your Prime Minister in such a “fuckin’ slope headed, goddamn knuckle dragging, open mouth breathing, bong water drinkin’, pumping the neighbor’s cat, twenty friggin’ pound water head baby, eyes so close together you must be portegee, macaroni and cheese eating, have another box of hamburger helper, moral compass lacking, liberal left-wing democrat trailer trash manner”.  (Thanks to Red Lemur of Samurai Pig for the rant.)  These f**kin’ bastards spent $20 Trillion in 6 weeks, but racist Mishy cannot spend some of her free time shopping for something appropriate for children?  WTF!  I am looking at my shoes, and just want our british brothers and sisters to know this:

As Much As The Obamas Want You To Think That They Are Us – Their Behavior Proves They Are NOT US!

Second, Bambi and Mishy ARE NOT AMERICA!  They are a couple of two-bit wanna be Juan and Eva Perons that are partying high on the hog before they get their asses handed to them and are booted from the White House.

Okay – I feel better now, especially after reading this:

But what’s this? Something, suddenly, seems to have made the Obama White House perk up and start to take an interest in the Brits. The Queen has invited the President to tea when he’s here for the G20 in April. And he’s in through the front door of Buckingham Palace faster than a Harley Davidson roaring along Route 66.

Note how the coolness of Team Obama disappears when a bit of regal glamour is introduced into the equation. He might not like the Brits, but he can recognise a global superstar when he encounters one. He wants to be associated with her. He’s shameless.

H/T to RabbleRouser Amy for her amazing post on this subject.