Lindsey Williams interviewing with Alex Jones on 12.4.2012 outlining ten agenda points that the global elite have planned out for the world in the next four years.  This is a very powerful interview and tracks with everything that we have been seeing with gold, the forced collapse of the dollar, the Federal Reserve buying mortgage backed securities, the District of Criminals’ usual Fourth Reich maneuvering, personal and commercial debt, student loan debt, and so on and so forth.  Years ago I wrote that the global elite through their banker tools are in the process of acquiring all the wealth of America including all property because the land underneath your house is what has real value (NOT THE GD HOUSE on a postage stamp).  Chaplain Williams covers this point extremely well.  I urge my readers to listen to the entire interview as he outlines the 3 factions at war currently (the global elites, an out of control pResident thumbing his nose at the elites, and a new renegade group of elites that are not bowing and scraping to the new world order), and how we, as regular ‘ol Americans are caught in the middle of a gunfight.  I personally say we take the fight to them without firing a single shot – move your money out of the big banks and financial markets, and change your tax status to exempt; take that money and pay off your debts.  Opt out of the NWO by only buying goods that you NEED and then only goods MADE IN AMERICA.  Cut these bastards off where they live; namely, their wallets.  Maybe readers can come up with more ways to financially choke the elite into submission to “We The People…’. END_OF_DOCUMENT_TOKEN_TO_BE_REPLACED 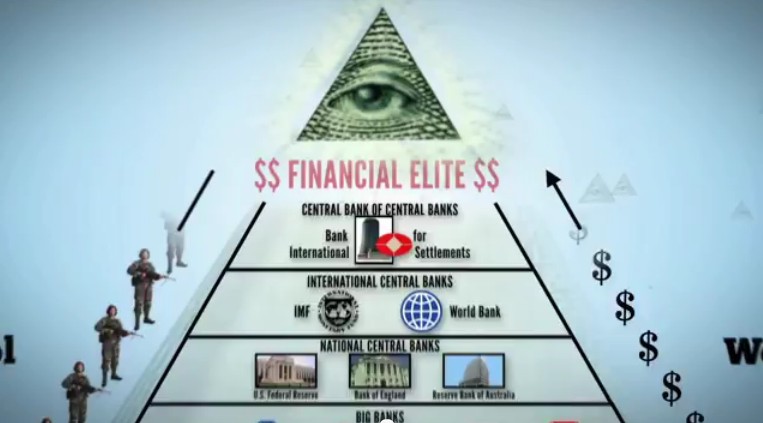 There are too many unanswered questions for Americans to continue to remain brainwashed and voluntarily enslaved by the elites.  I am planning on viewing this documentary and will update this post with my thoughts.  I am hoping readers will check out the trailer and the film themselves. END_OF_DOCUMENT_TOKEN_TO_BE_REPLACED

I urge my readers to take the time to watch the entire documentary, including the last few minutes, as there are necessary pieces of the monetary puzzle contained herein, including solutions.  The two major tenets include our currency not being backed by gold (because there is a finite amount and the banks own it), and that it does not matter what backs a currency, just who exactly controls the currency. (And in our pathetic interest bearing case, it happens to be the PRIVATE BANKING CARTEL known as the Federal Reserve with the international bankers standing behind it.  Can SOMEONE please explain to me why we have to borrow money from the big banks to give back to the big banks to keep them from failing?) END_OF_DOCUMENT_TOKEN_TO_BE_REPLACED

As many Monster readers know, Glenn Beck appears to use (uncredited) research from bloggers (ahem…), but mainly from Alex Jones’ Infowars and PrisonPlanet.TV. Beck has been blaming the very far left (Van Jones, etc.) and George Soros for the globalist agenda when readers here know that there is yet another ‘unknown’ level of shadow players behind the ass-clowns that are part of the Bohemian Grove and Bilderbergers. My money has always been on whoever actually owns and runs the Bank of International Settlements in Basil, Switzerland, (like we will ever know, but I digress).

Alex Jones has been contacted by a major magazine that is doing a piece on Glenn Beck to document the research that has been obtained from Infowars.com and then spun. Alex goes into a bit about what has already been documented and then lets Glenn have it for being a total establishment actor who is continuing to reinforce the left/right paradigm instead of speaking the truth about the actual chess-players that are turning the world’s population in serfs.

We have a global government run by private banking cartels that’s taken over our nation, and Glenn, we cannot allow you to blame it all on a mid-level nobody like Van Jones and tell us he is the top of the pyramid. Glenn, I’ll really start to believe in you when you do a show on Rupert Murdoch admittedly being one of the key people behind the move for global carbon taxes to fund this new private world government. And I want to tell the globalists something; you think Glenn Beck has co-opted my message and my information? No. This door swings both ways, this is a two way street, a double-edged sword. We are only getting more viewers and more listeners because of Glenn Beck. People are using him as a doorway and then they are finding the real bona fide information.

If you haven’t read this article yet, I suggest you do so now because then you might actually be able to grasp how FUBAR we are. The Tea Party vs. The Master Class

It is utterly evident to many of us that the global elites’ endgame is in process right now.  It was absolutely necessary to break the economic and innovative prowess of America.  The systematic destruction of manufacturing jobs and infrastructure, the rise of a consumer driven financial industry as a job producer, the funneling of American wealth to everybody around the world even though our debt precludes us giving trillions away in aid and ‘nation building’, and now a totally corrupted federal government (all three branches) that has been bought and paid for by Big Industry lobbyists, (pick one; Agra, Pharma, Oil, etc., or better yet, google S. 510 + Monsanto, or this link).  The only thing standing between the elite’s divvying up of the world into fiefdoms with the required decimation of useless population is us; the American People.

The Economic Collapse has it right on the money until the very last sentence:

Today global wealth is more highly concentrated in the hands of the elite than it ever has been at any other point in modern history.  Once upon a time, the vast majority of the people in the world knew how to grow their own food, raise their own animals and take care of themselves.  There weren’t many that were fabulously wealthy, but there was a quiet dignity in having land you could call your own or in having a skill that you could turn into a business.  Sadly, over the past several decades an increasingly growing percentage of agricultural land has been gobbled up by big corporations and by corrupt governments.  Hundreds of millions of people have been pushed off their land and into highly concentrated urban areas.  Meanwhile, it has become increasingly difficult to start a business of your own as monolithic global corporations have come to dominate nearly every sector of the world economy.  So more people than ever around the world are forced to work for “the system” just to make a living.  At the same time, those at the very top of the food chain (the elite) have spent decades rigging the system to ensure that increasing amounts of wealth will continue to flow into their pockets.  So now in 2010 we have a global system where a few elitists at the top are insanely wealthy while about half the people living on earth are wretchedly poor.

There are very few nations around the world that have not been almost entirely plundered by the global elite.  When the elite speak of “investing” in poor countries, what they really mean is taking control of the land, water, oil and other natural resources.  In dozens of nations around the world today, big global corporations are stripping fabulous amounts of wealth out of the ground even as the vast majority of the citizens of those nations continue to live in abject poverty.  Meanwhile, the top politicians in those nations are given huge bribes to go along with the plundering.

So what we have in 2010 is a world that is dominated by a very small handful of ultra-wealthy elitists that own an almost unbelievable amount of real assets, a larger group of “middle managers” that run the system for the global elite (and are rewarded very handsomely for doing so), hundreds of millions of people who actually do the work required by the system, and several billion “useless eaters” that the global elite don’t really need and that they don’t really have much use for.

The system was not ever designed to lift up the poor.  Nor was it ever designed to promote “free enterprise” and “competition”.  Rather, the elite intend to funnel all wealth to themselves and to have the rest of us enslaved either to debt or to poverty.

The following are 20 statistics that prove that the wealth of the world is increasingly being funneled into the hands of the global elite, leaving most of the rest of the world wretchedly poor and miserable….

#1 According to the UN Conference on Trade and Development, the number of “least developed countries” has doubled over the past 40 years.

#3 Average income per person in the poorest countries on the continent of Africa has fallen by one-fourth over the past twenty years.

#4 Bill Gates has a net worth of somewhere in the neighborhood of 50 billion dollars.  That means that there are approximately 140 different nations that have a yearly GDP which is smaller than the amount of money Bill Gates has.

#5 A study by the World Institute for Development Economics Research discovered that the bottom half of the world population owns approximately 1 percent of all global wealth.

#6 Approximately 1 billion people throughout the world go to bed hungry each night.

#7 The wealthiest 2 percent own more than half of all global household assets.