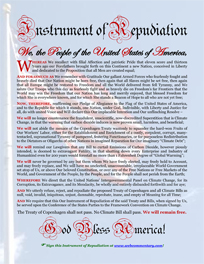 Glenn Beck does a radio interview with Lord Christopher Monckton about the Global Climate Treaty which will cede American sovereignty.   This interview breaks it down into more manageable pieces for those of us WHO JUST DON’T HAVE THE TIME TO READ IT as we are working on other un-American socialist, marxist, communist, fascist b*llsh*t.  Nothing like listening to a brit say “keening zombies” to make you smile.

Lookie, lookie what the Monster has found. The entire speech that Lord Monckton gave to the Minnesota Free Enterprise Insitute on 10.15.09. Warning: it is 1:35:33 – so get comfy.

Bad Behavior has blocked 2092 access attempts in the last 7 days.