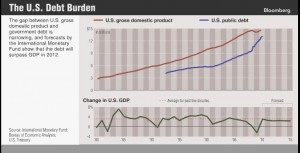 WARNING: We Are About To Go Over The Cliff

Remember the mother of all debt clocks? Just wait until you read the following article from Rep. Jason Chaffetz who was the originator of the “scam wow” phrasing.

Put down all beverages,  get out the duct tape, remember to breath, and then go over and read the whole article from The Hill.

The federal government’s fiscal year begins October 1, and there’s little reason to believe this year will be better than the last. Publicly held federal debt is forecast to increase from 56% of gross domestic product to 66% in 2010, driven by a budget deficit of $1.5 trillion in 2010. When debts owed to various government trust funds are included, our debt burden will reach nearly 100% of GDP in 2010. When unfunded liabilities of more than $100 trillion from Social Security, Medicare, and government employee pensions are included, our total debt is several times larger than GDP. (emphasis mine)

Contrary to what some have told us in the past, deficits and debts do matter, and at the levels these debts have been accumulating, they matter a lot. Excessive government debts eventually lead to higher interest rates, inflation, a reduction in private investment, and a higher percentage of tax dollars being used to pay off interest instead of funding programs or cutting taxes. In 2010, nearly $200 billion will be spent on interest payments, almost half of which will be going overseas. Interest payments are forecast to skyrocket to $829 billion by 2019.

Don’t say I did not warn you…and….the pResident just had to go to Copenhagen to bring home the games.