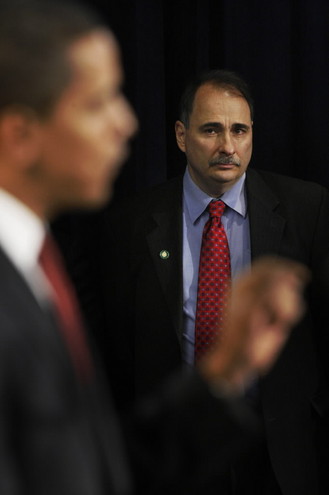 It is obvious that Obama has thin skin when it comes to his critics, but I never thought David Axelrod was stupid or egotistical enough to get into a “size” match with another politico, especially Karl Rove.  I definitely was wrong.  Readers, think about what the Alinsky trained, Obama crew does every time someone scares them or points out their stupidity; FoxNews, Glenn Beck, Joe the Plumber, Sarah Palin, Independent Inspector Generals, etc. Given their track record, the White House and David Axelrod must be absolutely terrified of Karl Rove.  This situation seems to have gone one step further with dueling presidential advisors. Why else would David, (the Chicago Hack), be stupid enough to take on The Master, Karl Rove (the guy that convinced the country to give Bush a second term)?  David and Karl may both be intellectuals, but David will never reach Karl’s level of intelligence, and a smackdown of founding fathers’ proportions is more than likely on the way.  What does it gain the White House for David to try to prove he’s smarter than Karl, and does he really think this is going to end well for either him or the White House when the facts are against them.

After you watch Karl wind himself up during an interview with Greta, David’s stupidity in black and white follows. You and I could shoot holes through the lies in this opinion piece.

What Karl Rove got wrong on the U.S. deficit

For its Topic A feature last Sunday, The Post invited a panel of political operatives to offer their advice to the Democratic Party on strategy for 2010 [Sunday Opinion, Jan. 10]. Improbably, one of the operatives asked was Karl Rove, President George W. Bush’s longtime chief strategist.

Rove has some impressive campaign victories to his credit. But given the shape in which the last administration left this country, I’m not sure I would solicit his advice. And given the backhanded advice he offered, I’m not sure he was all that eager to help.

Of all the claims Rove made, one in particular caught my eye for its sheer audacity and shamelessness — that congressional Democrats “will run up more debt by October than Bush did in eight years.”

So, let’s review a little history:

To put the breathtaking scope of this irresponsibility in perspective, the Bush administration’s swing from surpluses to deficits added more debt in its eight years than all the previous administrations in the history of our republic combined. And its spending spree is the unwelcome gift that keeps on giving: Going forward, these unpaid-for policies will continue to add trillions to our deficit.

This fiscal irresponsibility — and a laissez-faire attitude toward the excesses of the financial industry — helped create the conditions for the deepest economic catastrophe since the Great Depression. Economists across the political spectrum agreed that to deal with this crisis and avoid a second Great Depression, the government had to make significant investments to keep our economy going and shore up our financial system.

That is why President Obama and Congress crafted the American Recovery and Reinvestment Act. Despite Rove’s assertion, it is widely accepted that the difficult but necessary steps Obama took have helped save our economy from an even deeper disaster. And while Rove conveniently ignores that it was President Bush — not Obama — who signed into law the $700 billion Troubled Asset Relief Program bailout for banks, the Obama administration’s rigorous stewardship added transparency and accountability that have cut the expected cost of that program by two-thirds.

If you want to read the rest, hit the above link, and for those that are interested, this op-ed piece in the Wall Street Journal sure sounds like Karl is calling Obama a liar.

Bad Behavior has blocked 2542 access attempts in the last 7 days.