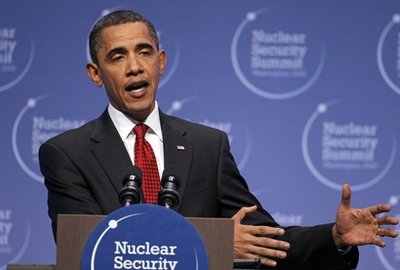 AYFKM? This Fool Is Considered The "Leader of the Free World"?

Still think you are living in America with freedom of speech and freedom of the press vs. The Banana Republic States of America? After watching him bow again yesterday and the latest press exclusions, this guy has got to go, and IMMEDIATELY.  If I was more of a gambler, I would say that RAP is making headway and/or something bigger than nuclear weapons (like ours, theirs, and your money) is being talked about.

World leaders arriving in Washington for President Obama’s Nuclear Security Summit must have felt for a moment that they had instead been transported to Soviet-era Moscow.

They entered a capital that had become a military encampment, with camo-wearing military police in Humvees and enough Army vehicles to make it look like a May Day parade on New York Avenue, where a bicyclist was killed Monday by a National Guard truck.

In the middle of it all was Obama — occupant of an office once informally known as “leader of the free world” — putting on a clinic for some of the world’s greatest dictators in how to circumvent a free press.

The only part of the summit, other than a post-meeting news conference, that was visible to the public was Obama’s eight-minute opening statement, which ended with the words: “I’m going to ask that we take a few moments to allow the press to exit before our first session.”

Reporters for foreign outlets, many operating in repressive countries, got the impression that the vaunted American freedoms are not all they’re cracked up to be.

Yasmeen Alamiri from the Saudi Press Agency got this lesson in press freedom when trying to cover Obama’s opening remarks as part of a limited press “pool”: “The foreign reporters/cameramen were escorted out in under two minutes, just as the leaders were about to begin, and Obama was going to make remarks. . . . Sorry, it is what it is.”

Alamiri’s counterparts from around the world had similar experiences. Arabic-language MBC TV’s Nadia Bilbassy had this to say of Obama’s meeting with the Jordanian king: “We were there for around 30 seconds, not enough even to notice the color of tie of both presidents. I think blue for the king.”

“When you only see the president for 15 or 20 seconds without him asking if you have any questions, it’s very frustrating,” said Laura Haim of France’s Canal+, which persuaded the White House to include foreign outlets in the press pool. “It’s very important for this president, who wants to restore the image of the United States, to have more access.”

Reporters, even those on the White House beat for two decades, said it was the most restrictive set of meetings they had ever seen in Washington. They complained to both the administration and White House Correspondents’ Association, which will discuss the matter Thursday with White House press secretary Robert Gibbs.

The restrictions have become a common practice for the Obama White House. When Israeli Prime Minister Benjamin Netanyahu came to the White House a couple of weeks ago, reporters were kept away. Soon after that, Obama signed an executive order on abortion, again without any coverage.

Over the weekend, Obama broke with years of protocol and slipped off to a soccer game without the “protective” pool that is always in the vicinity of the president in case the unthinkable occurs. Obama joked about it later to Pakistan’s prime minister, saying reporters “were very upset.”

In “bilateral” meetings with foreign leaders, presidents usually take questions, or at least trade statements. But at most of Obama’s, there were only written “readouts”:

Canada: “The president and the prime minister noted the enduring strength of our bilateral partnership.” India: “The two leaders vowed to continue to strengthen the robust relationship between the people of their countries.” Pakistan: “President Obama began by noting that he is very fond of Pakistan.”

Reporters, many in a “filing center” about a quarter-mile away from the leaders’ meetings, relied on dispatches from colleagues allowed in as the press pool. The dispatches, over three days, were uniform: “They were too far away to hear conversation. . . . Again, Obama had nothing to say of substance that pooler heard. . . . We were in for all of 30 seconds. No news; no quotes and again no statements. . . . Same deal folks.”

Finally, Obama walked over to a group of reporters Monday afternoon. Would he give them an account of his meetings? “I’ll let somebody else do it,” he said with a smile.

Glenn starts out with the differences, or lack thereof, of the two parties controlling the District of Criminals. These two parties are just two sides of the progressive coin.

He also talks about Mishy pushing the fight against childhood obesity and mentions food deserts and how there probably is legislation that directly relates. Imagine my surprise when I realized he was talking about this bill that I read months ago; H.R. 3100: Food Desert Oasis Act of 2009. This bill was introduced on June 26, 2009 by none other than Bobby Rush of Illinois.

(Refresh for more segments to be added as available.)


Part 4, ClimateGate (How’s that utopia working out for ya?):