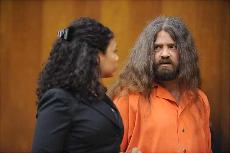 I Didn’t Even Point A Gun At Her….

And that makes it alright?

Why are the best, brightest, and most innocent amongst our society still prey for predators?

When I no longer see news stories about 3 year old’s bodies being found in trash bags, and 23 year old women gone missing from jogging trails and their own living rooms, I will start to have hope for the human race and believe in equality for everyone.

A man accused of shooting his sister-in-law in the face with a shotgun during a dispute with his estranged wife in Lodi pleaded not guilty Thursday to attempted murder.

George Hartwig was not happy when a judge ordered him to stay away from his ailing wife, Denise Richardson; her sister, Louisa Rodas, or any other family member.

“That sucks,” Hartwig told Superior Court Judge Harry G. Carroll. He said his wife — bedridden from ovarian cancer — might not make it to Christmas and he wanted to see her before then.

“I didn’t even point a gun at her,” he said, referring to his wife.

Hartwig was formally charged at the hearing in Superior Court in Hackensack with the attempted murder of 41-year-old Rodas of Hackensack, who remained in critical condition Thursday.

Authorities said Rodas was taking care of Richardson at a Lodi home on Monday when Hartwig — a man with a long history of domestic violence — showed up and got into an argument with Richardson.

Richardson’s mother forced him to leave, but he returned hours later with a shotgun, they said.

Rodas, who was alone in the house with Richardson, called her brother and son, who rushed to the home. But by the time they arrived, Hartwig had already shot Rodas in the face, they said. The two subdued Hartwig until police arrived at the scene, authorities said.

Rodas and Richardson’s mother, Bettyjean Kling, said Thursday that both her daughters were “hanging between life and death.”

Rodas lost an eye, an ear and a portion of her right skull, Kling said. Pellets remain lodged in her body and, if she recovers, she will most likely be paralyzed on the left side of her body.

“Our biggest concern is that she’ll get an infection and won’t be able to fight it,” Kling said. “If she can fight off an infection, then we will do our best to manage everything else. … We just want to save her life.”

Kling, a self-proclaimed women’s rights activist who has a weekly Internet radio show, said she attended Hartwig’s arraignment to “make sure he’s being held and can’t get anywhere near my family.”

She said Hartwig was physically and emotionally abusive for decades and that he was angry in the last few weeks because Richardson’s family would not let him see her.

“We were all afraid of George,” Kling said. “Only Denise had faith in him, because she felt sorry for him and thought she could fix him.”

Hartwig is also charged with aggravated assault, pointing a firearm at Richardson and three counts of criminal weapons possession.

He was ordered held at the Bergen County Jail on $1 million bail. His attorney, Tana McPherson, said she will request a bail-reduction hearing. However, Hartwig said he couldn’t post bail even if it were much lower.

“So you might as well save your time,” Hartwig said.

I can think of another way to save the taxpayers massive amounts of time and money on this case….and it is what everyone does with a rabid dog…

George Hartwig with his lawyer, Tana McPherson. Hartwig is accused of shooting his sister-in-law.

And WHAT IS THIS WOMAN DOING?