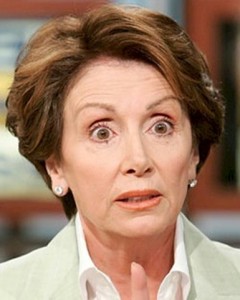 It’s too late Nancy, much too late.  A bazillion bloggers and grassroots activists are going to be making sure that the voting records of every single congressman and senator who is running for re-election are splashed across the internet and the local neighborhood market in 2010, and again in following elections. Members of the 111th congress will be going home for breaking their oath to uphold and defend the U.S. Constitution, and for making future generations indentured servants to the federal government.

Speaker Nancy Pelosi (D-Calif.) has privately told her politically vulnerable Democratic members that they will not vote on controversial bills in 2010 unless the Senate acts first.

After a year of bruising legislative victories that some political analysts believe have done more to jeopardize her majority than to entrench it, Pelosi is shifting gears for the 2010 election.

The Speaker recently assured her freshman lawmakers and other vulnerable members of her caucus that a vote on immigration reform is not looming despite a renewed push from the White House and the Congressional Hispanic Caucus. The House will not move on the issue until the upper chamber passes a bill, Pelosi told the members.

But according to Democrats who have spoken to Pelosi, the Speaker has expanded that promise beyond immigration, informing Democratic lawmakers that the Senate will have to move first on a host of controversial issues before she brings them to the House floor.

“The Speaker has told members in meetings that we’ve done our jobs,” a Democratic leadership aide said. “And that next year the Senate’s going to have to prove what it can accomplish before we go sticking our necks out any further.”

Rep. Gerry Connolly (D-Va.), the president of the freshman class, said that Pelosi came to last Wednesday’s freshman breakfast to deliver that message, and that it was met with wide spread approval.

“I think freshmen, particularly, are not enamored of the idea of being asked to walk the plank on a controversial item if the Senate is not going to take any action,” Connolly said.

Pelosi’s promise could dim the prospects for other White House priorities as well, including the Employee Free Choice Act (EFCA) — known as “card check” — and the repeal of the “don’t ask, don’t tell” prohibition on gays serving openly in the military.

I don’t believe this for a second, do you?

“There’s not going to be a ton of stuff legislatively next year either way,” a House leadership aide said. “But on EFCA — even though the House has demonstrated its ability to pass it — and on Don’t Ask, Don’t Tell, the Senate is definitely going to have to act first.”

Is that because the members of the House are going to be running for re-election so the business of the people will not be getting done?  At this point, a break from the un-Constitutional free-for-all that is going on with Nancy and Harry will be refreshing.

Some liberals are concerned that there will be fewer Democrats after the 2010 elections and that the White House should ramp up, not slow down, its agenda. They have also made the case that President Barack Obama and congressional leaders must move left to ensure that the Democrats’ base will show up next November, and argument immigration reform proponents have been making  with increased intensity in recent weeks.

The “all-in” scenario is the one I have been expecting as the reality of their situation hits home when they go back to their districts and find protestors on their office steps, and their office phones in a puddle.