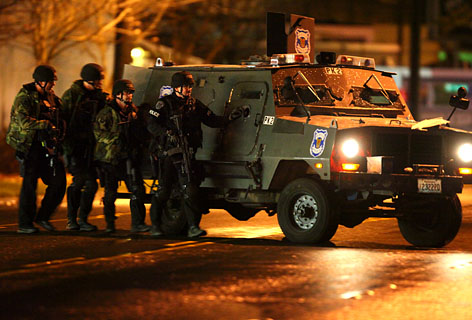 I know I’m going to be taking massive amounts of heat from people that know ‘good’ police officers, but I have yet to meet one during my 48 years on the planet – so keep your comments to yourself. Unless, of course, you would like to explain to me why SWAT teams in full riot gear were staged for the 2002 SeaFair Parade in Seattle to protect America from the threat of families with toddlers?

I have stated before and will state again that the police are trained to look upon Americans as criminals that they just have not arrested yet, and that the justice system is all about trying to create yet another revenue stream under the guise of ‘protecting’ Americans.

What follows is an article from Reason.com and Radley Balko about the overwhelming force used to serve a search warrant for some pot.  The video that follows is of the actual paramilitary operation to serve the warrant on Jonathan Whitworth of Columbia, Missouri.  The sad reality of this situation is that this operation is the norm, and has been for some years now.  WAKE UP AMERICA!  The terrorism has been around for decades, it just may not have touched you yet.

In February, I wrote the following about a drug raid in Missouri:

SWAT team breaks into home, fires seven rounds at family’s pit bull and corgi (?!) as a seven-year-old looks on.

They found a “small amount” of marijuana, enough for a misdemeanor charge. The parents were then charged with child endangerment.

So smoking pot = “child endangerment.” Storming a home with guns, then firing bullets into the family pets as a child looks on = necessary police procedures to ensure everyone’s safety.

Now there’s video, which you can watch below. It’s horrifying, but I’d urge you to watch it, and to send it to the drug warriors in your life. This is the blunt-end result of all the war imagery and militaristic rhetoric politicians have been spewing for the last 30 years—cops dressed like soldiers, barreling through the front door middle of the night, slaughtering the family pets, filling the house with bullets in the presence of children, then having the audacity to charge the parents with endangering their own kid. There are 100-150 of these raids every day in America, the vast, vast majority like this one, to serve a warrant for a consensual crime.

But they did prevent Jonathan Whitworth from smoking the pot they found in his possession. So I guess this mission was a success.

I’ve exchanged emails with the mother of the family, who was in the home at the time of the raid. I’m waiting on her permission to publish her account of what happened.

Overkill: The Rise of Paramilitary Police Raids in America

Americans have long maintained that a man’s home is his castle and that he has the right to defend it from unlawful intruders. Unfortunately, that right may be disappearing. Over the last 25 years, America has seen a disturbing militarization of its civilian law enforcement, along with a dramatic and unsettling rise in the use of paramilitary police units (most commonly called Special Weapons and Tactics, or SWAT) for routine police work. The most common use of SWAT teams today is to serve narcotics warrants, usually with forced, unannounced entry into the home.

These increasingly frequent raids, 40,000 per year by one estimate, are needlessly subjecting nonviolent drug offenders, bystanders, and wrongly targeted civilians to the terror of having their homes invaded while they’re sleeping, usually by teams of heavily armed paramilitary units dressed not as police officers but as soldiers. These raids bring unnecessary violence and provocation to nonviolent drug offenders, many of whom were guilty of only misdemeanors. The raids terrorize innocents when police mistakenly target the wrong residence. And they have resulted in dozens of needless deaths and injuries, not only of drug offenders, but also of police officers, children, bystanders, and innocent suspects.

This paper presents a history and overview of the issue of paramilitary drug raids, provides an extensive catalogue of abuses and mistaken raids, and offers recommendations for reform.