(Editor’s Note: How many of you would confess that you watch O’Reilly just to see how far in the tank he has gone for Obama and/or for the Charles Krauthammer segments?)

Over the past weekend, many traditional tax day tea party events happened across the country with the usual incredible bad manners being portrayed by the liberal left of the democratic party. Charles Krauthammer sums up the basis of their bad behavior in his usual succinct manner.

‘This is a response that comes out of envy and panic.  They’re looking at this people; this movement (the tea party), that even the mainstream media had dismissed for two years as a bunch of illiterate yahoos…and then all of a sudden two years later, the tea party, basically, are the dominate element in American politics.’

…and Obama is still in denial. Anybody with half a brain knows that Obama will not move to the center.  That will make the left wing of the Big Government Party very happy and will ensure more trash being taking out in 2012.

Charles Krauthammer On The Iran Sanctions

More on the “diplomacy of appeasement and apology” (Jon Kyl). 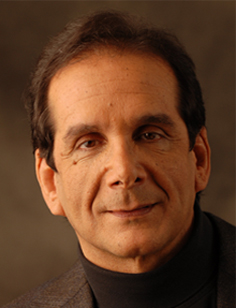 Charles speaks to what he believes will be the raging debate in 12 months; a VAT tax or national sales tax.  He also states that the insurance companies will become the lapdogs of the government, and the money collectors for the government.  He hasn’t often been wrong, now has he.