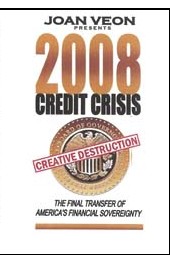 END_OF_DOCUMENT_TOKEN_TO_BE_REPLACED

Wake Up America! Let all your friends and family know about the debt prison that The Federal Reserve, the IMF, the World Bank, the UN, and the world central banks have created for everyone in this world with their fiat money.

Even the Spaniards are AWAKE as they explain to their police, “Wake up guys, wake up.  Whom we have to put in jail is this gang of psychopaths that are creating the economic crisis to leave us in the street…and as I have said, one day you will have to join us, with their weapons to take the banks to finish with bankers…I know you are suffering!

There has been a report from Charlie Skelton of the Guardian UK that one of the police officers joined the protestors.

Do You Know Where Your Banker Is?

The recession is over and the American economy is recovering. Hey, unemployment is down to 9.7%. Rainbows, lollipops, and pink freakin’ unicorns for everybody!  I suppose if that were true, the world’s bankers would not be flocking to Sydney this week for a meeting that was scheduled last year.

Representatives from 24 central banks and monetary authorities, including the US Federal Reserve and European Central Bank, landed in Sydney to meet tomorrow at an undisclosed location.

Organised by the Bank for International Settlements last year, the two-day talks are shrouded in secrecy with extensive security believed to have been invoked by law enforcement agencies.

Speculation that the chairman of the US Federal Reserve, Ben Bernanke, would make an appearance could not be confirmed last night.

The event will be dominated by Asian delegations and is expected to include governors of the People’s Bank of China, the Bank of Japan and the Reserve Bank of India.

The arrival of the high-powered gathering coincided with a fresh meltdown on world share markets, sparked by renewed concerns about global growth and sovereign debt.

Fears that countries including Greece, Portugal, Spain and Dubai could default on debt repayments combined with disappointing US jobs data to spook investors.

Australia’s ASX 200 slumped 2.4 per cent to its lowest close since November 5, echoing a sharp fall on Wall Street.

Asian share markets were also pummelled, with Japan’s Nikkei 225 down almost 3 per cent and Hong Kong’s Hang Seng off 3.3 per cent.

The damage was also being felt by European markets last night with London’s FTSE 100 down 1 per cent in early trade.

Sovereign debt fears rippled through to the Australian dollar, which was hammered to a four-month low of US86.43 and was trading close to that level last night.

“This does feel like ’08 and ’07 all over again whereby we had these sorts of little fires pop up and they are supposedly contained but in reality they are not quite contained,” said H3 Global Advisers chief executive Andrew Kaleel.

“Dubai should have been an isolated incident and now we are seeing issues with Greece, Portugal and Spain.”

But it wasn’t all bad news with the RBA upping its Australian growth forecasts and flagging more interest rate rises this year.

The outlook for global growth is likely to be a key theme of the high-level central bank talks.

The gathering also comes at an important time for the BIS as it initiates an overhaul of the global banking system, which will include new capital rules applying to banks and more stringent standards regulating executive pay.

A key part of the two-day talkfest will be a special meeting of Asian central bankers chaired by the governor of the Central Bank of Malaysia, Zeti Akhtar Aziz.

Federal Treasurer Wayne Swan will address the central bank officials at a dinner on Monday night.

File the information in this article away because I will be posting something I have been researching for quite some time now that has direct relevance to this meeting.

Want To Control A Country? Control The Money

Do you remember when TurboTax Timmie as president of the NY Federal Reserve brokered the original AIG deal of $85 Billion, the sale of Bear Stearns,  and allowed Lehman Bros to fail?  Since that time, AIG has sucked $182 Billion out of our wallets with somewhere between $62 Billion and $90 Billion going to foreign banks. TTTimmie now wants to be able to seize any large company, and control the flow of money even more, with control being split between the Treasury,  the Federal Reserve, and Congress; the institutions that appear to be the three founders of the current economic meltdown.  TTT and the Obama administration are dancing on the fine edge in their appearances to the world right before the upcoming G20 meeting on April 2nd.

I was expecting what I read two days ago in the Washington Post:

The Obama administration is considering asking Congress to give the Treasury secretary unprecedented powers to initiate the seizure of non-bank financial companies, such as large insurers, investment firms and hedge funds, whose collapse would damage the broader economy, according to an administration document.

The government at present has the authority to seize only banks.

Giving the Treasury secretary authority over a broader range of companies would mark a significant shift from the existing model of financial regulation, which relies on independent agencies that are shielded from the political process. The Treasury secretary, a member of the president’s Cabinet, would exercise the new powers in consultation with the White House, the Federal Reserve and other regulators, according to the document.

The administration plans to send legislation to Capitol Hill this week. Sources cautioned that the details, including the Treasury’s role, are still in flux.

Treasury Secretary Timothy F. Geithner is set to argue for the new powers at a hearing today on Capitol Hill about the furor over bonuses paid to executives at American International Group, which the government has propped up with about $180 billion in federal aid. Administration officials have said that the proposed authority would have allowed them to seize AIG last fall and wind down its operations at less cost to taxpayers.

The administration’s proposal contains two pieces. First, it would empower a government agency to take on the new role of systemic risk regulator with broad oversight of any and all financial firms whose failure could disrupt the broader economy. The Federal Reserve is widely considered to be the leading candidate for this assignment. But some critics warn that this could conflict with the Fed’s other responsibilities, particularly its control over monetary policy.

The government also would assume the authority to seize such firms if they totter toward failure.

Besides seizing a company outright, the document states, the Treasury Secretary could use a range of tools to prevent its collapse, such as guaranteeing losses, buying assets or taking a partial ownership stake. Such authority also would allow the government to break contracts, such as the agreements to pay $165 million in bonuses to employees of AIG’s most troubled unit.

And then this morning, once again from the Washington Post:

Treasury Secretary Timothy F. Geithner plans to propose today a sweeping expansion of federal authority over the financial system, breaking from an era in which the government stood back from financial markets and allowed participants to decide how much risk to take in the pursuit of profit.

The administration’s signature proposal is to vest a single federal agency with the power to police risk across the entire financial system. The agency would regulate the largest financial firms, including hedge funds and insurers not currently subject to federal regulation. It also would monitor financial markets for emergent dangers.

The administration yesterday detailed its proposed process, under which the Federal Reserve Board, along with any agency overseeing the troubled company, would recommend the need for a takeover. The Treasury secretary, in consultation with the president, then would authorize the action. The firm would be placed under the control of the Federal Deposit Insurance Corp. The government also would have the power to take intermediate steps to stabilize a firm, such as taking an ownership stake or providing loans.

One important difference is that the decision to seize a bank is made by agencies that have considerable autonomy and are intentionally shielded from the political process. Some legislators have raised concerns about providing such powers to the Treasury secretary, a member of the president’s Cabinet.

Our financial system has now been placed in the political arena alongside abortion and taxes….just more items for the politicians to use during elections.  Thomas Jefferson is SPINNING in his grave…

If the American people allow private banks to control the issuance of their currency, first by inflation and then by deflation, the banks and corporations that will grow up around them will deprive the people of all their property until their children wake up homeless on the continent their fathers conquered – Thomas Jefferson