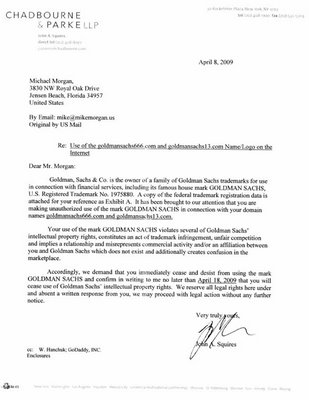 Oh my lovelies, you are going to enjoy this; I am sure. It’s like finding your car keys after a 15 minute search, a treasure, or a tall glass of lemonade on a really hot day. How many times have we said to ourselves and each other; “follow the money”?  What have we been doing for the last year except following the money?

I want to tip my hat to  Rescottish for emailing this information to me so that I may pass it on to you, and thank him for bringing a more indepth view of another piece of the puzzle to our attention.  Please give Mr. Morgan your time, visit his site, read the information that he has discovered, and see what nuggets of brain candy pop when put together with what we know about the Pilgrims.  Also of note is that Goldman Sachs is probably living on his site like any number of the international laws firms that live on mine; (see below, and of course this item is not from an American news agency.)

Goldman Sachs is attempting to shut down a dissident blogger who is extremely critical of the investment bank, its board members and its practices.

The bank has instructed Wall Street law firm Chadbourne & Parke to pursue blogger Mike Morgan, warning him in a recent cease-and-desist letter that he may face legal action if he does not close down his website.

Florida-based Mr Morgan began a blog entitled “Facts about Goldman Sachs” – the web address for which is goldmansachs666.com – just a few weeks ago.

In that time Mr Morgan, a registered investment adviser, has added a number of posts to the site, including one entitled “Does Goldman Sachs run the world?”. However, many of the posts relate to other Wall Street firms and issues.

According to Chadbourne & Parke’s letter, dated April 8, the bank is rattled because the site “violates several of Goldman Sachs’ intellectual property rights” and also “implies a relationship” with the bank itself.

Unsurprisingly for a man who has conjoined the bank’s name with the Number of the Beast – although he jokingly points out that 666 was also the S&P500’s bear-market bottom – Mr Morgan is unlikely to go down without a fight.

He claims he has followed all legal requirements to own and operate the website – and that the header of the site clearly states that the content has not been approved by the bank.

On a special section of his blog entitled “Goldman Sachs vs Mike Morgan” he predicts that the fight will probably end up in court.

“It’s just another example of how a bully like Goldman Sachs tries to throw their weight around,” he writes.

Speaking to The Daily Telegraph, Mr Morgan explained how he went through a similar battle with US homebuilder Lennar a few years ago after he set up a website to collect information on what he alleged was shoddy workmanship in its homes. The pair eventually settled out of court.

“Since I went through this with Lennar, I’ve had advice from some of the best intellectual property lawyers, and I know exactly what I can and can’t do. We’re not going to back down from this,” he promises.

Mr Morgan adds that if Goldman manages to shut down his site, he has a number of other domain names registered.

AIG and Goldman Sachs – Scandal, Scheme, Fraud, RICO or ALL

NOTE: When I read this piece on Market Watch, I asked myself why the SEC, FDIC, FBI, CIA, MI6, DGSE and Secret Service haven’t done a thing to uncover the stinky-stink at Goldman Sachs and how it has placed their stinky-stink in just about every country on the planet. It’s like a science fiction movie with the Evil Genius planting a timed virus throughout the world.

Government Sachs Is In Control
Commentary: Investment bank has strengthened its position through bailout by David Weidner on Market Watch

Lloyd Blankfein must be the luckiest guy on Wall Street. He leads one of the Street’s biggest bailed-out firms, but unlike other companies propped up by taxpayers . . .

Since the fall of Bear Stearns Cos. a little more than a year ago, Goldman has taken more than $20 billion in taxpayer cash through loans, payments and backstops. Goldman’s latest bailout coup was a $12.5 billion paid out of AIG’s $180 billion government cash infusion.

Until it was fully extricated, Goldman always characterized its exposure to AIG as “immaterial,” and that its $20 billion notional exposure to AIG was hedged. Turns out that it was — through government bailouts that didn’t exist when Goldman entered the contracts.

“The web between AIG and Goldman Sachs is something that should be pursued,” Spitzer said. “Why did [those payments] happen, what questions were asked, why did we need to pay 100 cents on the dollar for those transactions if we had to pay anything, what would have happened to the financial system had it not been paid?”

Here is the post and letter stating cease and desist:

It looks like Goldman Sachs is not happy with this website I created to post information about Goldman Sachs. I received the letter below from their attorney today, and my Intellectual will publish the truth. Feel free to visit the blog and leave your comments. You may also submit posts through the blog or our blog email address Mike@MikeMorgan.us Property attorney will be responding accordingly. It’s only been up about a week, and there is not much on there yet, but I invite everyone to submit articles and posts to the website relevant to Goldman Sachs. All posts will be reviewed, but unless they are clearly false or malicious, we

Needless to say, we will most likely fight this one in court with Goldman Sachs and now we will expedite adding relevant content to this website. We have followed all of the legal requirements to own and maintain the website under the address we have selected. If you have any media contact you want to forward this to, be my guest. It’s just another example of how a bully like Goldman Sachs tries to throw their weight around and this is a clear violation of our Constitutional Rights.

On a completely different note; who was studying INSCAP?  Please get back to me on that one.