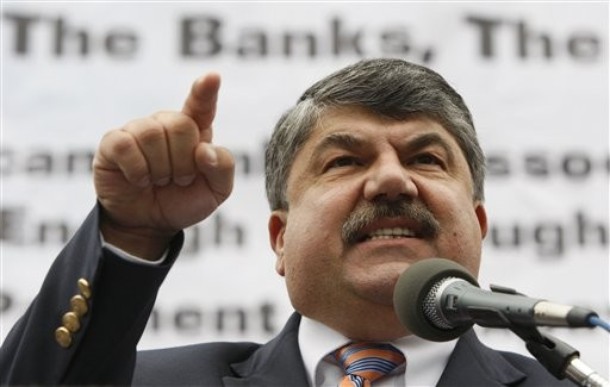 Oh boy, you know the corruption surrounding the Employee Free Choice Act is wide, deep, and unbelievable.  Today’s Are You Freakin Kidding Me? Award goes to the AFL-CIO for their willingness to “persuade” their members to change party affiliations to help a traitor like Sen. Arlen Specter keep his frakkin’ seat!  At this point, Specter is going to need all the help he can get and this is probably more legal than what the unions and ACORN did during the election cycle.  Now you KNOW for sure that taking away the secret ballot is going to harm the American Worker, the American Small Business Owner and ALL THEIR FAMILIES if this much money and arm-twisting will happen to help one senator….oops….another senator get what the unions want.

‘Check card’ bill on the line

Angling for a critical Senate swing vote to pass the “card check” bill that would make it easier to form unions, Pennsylvania labor leaders promised Sen. Arlen Specter that they will switch union members from the Democratic Party to the Republican Party to help him win a tough 2010 primary election, The Washington Times has learned.

Pennsylvania AFL-CIO President William M. George said he pledged Mr. Specter “all kinds of help from the union” in a series of meetings to woo the Republican senator’s support for the bill, which would ease rules favoring secret-ballot elections to unionize workplaces.

“We are pushing to give him help in the primary, including changing Democrats to Republicans for the primary,” Mr. George told The Times. “It’s hard to do because of other races in the state … but we’ll do it for ‘card check.’ “


Pennsylvania persists as a union stronghold with 1.4 million union members and union retirees, accounting for more than 10 percent of the population and one-third of households. About 73 percent of the bloc are registered Democrats, according to the state AFL-CIO.

Mr. Specter previously said he would not bend to party loyalty nor special-interest pressure but do what his conscience tells him is in the interest of the nation or the state.

He can expect to suffer the union’s wrath if he opposes the bill.

“If he votes against us,” Mr. George said, “we will rise the intensity, possibly with another candidate and possibly another moderate in the Republican Party.”

Go to the link above to read the rest…it gets better and better….

(I would like to thank Rob for sending this info along to me.)