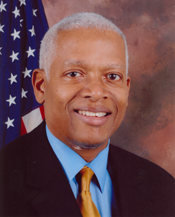 AYFKM?: Hank Johnson Has Serious Concern That Guam Is Going To Capsize

I did not think that I would hear another imbecilic statement on the heels of Nancy Pelosi’s “We have to pass the bill to find out what is in it”, but I was rudely jolted back into the reality that is now our life by Idiot-In-Charge and Are You Freakin’ Kidding Me? Awards winner, Hank Johnson.  Non-rep. Johnson is concerned that the addition of 8,000 people to the little island of Guam will capsize it.  Everyone needs to give Adm. Robert Willard, (head of the US Pacific fleet) a rousing round of applause for not laughing and/or verbally bitchslapping the congresscriminal in the face of what could only be described as sheer ignorance or a drug induced delusion of intelligence.  After living on an island for many years, I was under the impression that only tourists believed that islands were floating masses of land out in the ocean.  Obviously, I was wrong.

Rep. Hank Johnson (D-Ga.) is raising some eyebrows with a comment he made about the U.S. territory of Guam during a House Armed Services Committee hearing last Thursday.

In a discussion regarding a planned military buildup on the Pacific island, Johnson expressed some concerns about the plans to Adm. Robert Willard, head of the U.S. Pacific fleet.

“My fear is that the whole island will become so overly populated that it will tip over and capsize,” Johnson said. Willard paused and replied, “We don’t anticipate that.”

It is hard to imagine that a lawyer, former judge, and member of the Democratic Leadership could be this stupid, but considering Nancy’s comment, it is not beyond the believable, and as the RedLemur stated this morning, “it’s amazing the Dems have gotten this far being this stupid.”