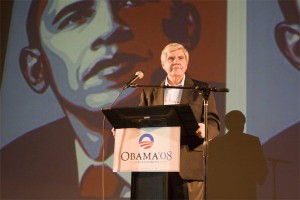 Ben is ‘the guy’, just like Mary is ‘the girl’, that had the spotlight on them and the deals the senate leadership made to buy their votes were very public.  But what about all those other senators standing in line rubbing their grubby mitts together and panting?  Did you really think those were the only two kickbacks, and is this the best we can do as Americans to “reform” health care? If it is, then we have bigger problems than Barry and Mishy wasting our money on 24 ladies-in-waiting, and having pizza flown in, (but you already knew that).  The hypocrisy and corruption of our elected lawmakers is now on complete display with 1000 watt halogens illuminating the payoffs – and they still keep doing it on a bill that the majority of Americans are melting their phones lines over. What does that say?  I know I have said before that if America flips this congress, it will cut off Barry’s power to fundamentally transform this country into a second rate european socialist state.

Ben Nelson’s “Cornhusker Kickback,” as the GOP is calling it, got all the attention Saturday, but other senators lined up for deals as Majority Leader Harry Reid corralled the last few votes for a health reform package.

Nelson’s might be the most blatant – a deal carved out for a single state, a permanent exemption from the state share of Medicaid expansion for Nebraska, meaning federal taxpayers have to kick in an additional $45 million in the first decade.

But another Democratic holdout, Sen. Bernie Sanders (I-Vt.), took credit for $10 billion in new funding for community health centers, while denying it was a “sweetheart deal.” He was clearly more enthusiastic about a bill he said he couldn’t support just three days ago.

Nelson and Sen. Carl Levin (D-Mich.) carved out an exemption for non-profit insurers in their states from a hefty excise tax. Similar insurers in the other 48 states will pay the tax.

Vermont and Massachusetts were given additional Medicaid funding, another plus for Sanders and Sen. Patrick Leahy (D-Vt.) Three states – Pennsylvania, New York and Florida – all won protections for their Medicare Advantage beneficiaries at a time when the program is facing cuts nationwide.

All of this came on top of a $300 million increase for Medicaid in Louisiana, designed to win the vote of Democratic Sen. Mary Landrieu.

Under pressure from the White House to get a deal done by Christmas, Reid was unapologetic. He argued that, by definition, legislating means deal making and defended the special treatment for Nelson’s home state of Nebraska.

“You’ll find a number of states that are treated differently than other states. That’s what legislating is all about. It’s compromise,” he said.

I am wondering how many laws this type of deal making for individual states under federal law is actually breaking.  Maybe the very intelligent Monster readers can answer that question.  Meanwhile, I predict they shove this through sometime on Monday or Tuesday and set up the powder keg called the Conference Committee between the Senate and the House because damn-it-all-to-hell, Nancy said she would have a Christmas Present for the American People!

Make sure to go over and read the rest.

You missed the boat with this ad, Dick!  You might want to stop sending out those emails asking for money so that this ad can be run in Nebraska.  On second thought, you might WANT to run this ad in Nebraska….