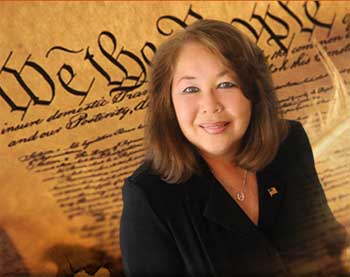 I can tell you from experience, nothing more volatile than a pissed off “local” woman.  Miki Booth of Oklahoma is originally from here in the islands and she is letting people know what she thinks of Obama’s certificate of live birth.

Oklahoma firecracker takes on Obama eligibility
Candidate for Congress: ‘If he claims he was born at Kapi’olani, I want him to show proof’

NASHVILLE – Just as a tea-party convention crowd gathered to discuss strategy for the movement, one woman stepped forward to the microphone – holding up two Hawaiian long-form birth certificates and a copy of President Obama’s purported short-form certification of live birth – and, referencing the short form, she told the crowd, “This piece of junk is what you get when you don’t have one of these!”

When the forum was over, tea partiers scrambled around a table to see and photograph her original documents.

The woman, Miki Booth, originally from Hawaii, is running for the U.S. House of Representatives in Oklahoma’s second district as an independent constitutional conservative. She had presented original long-form birth certificates belonging to her son and husband, dated 1981 and 1949.

“They are the ‘vault’ copies of the original ones filled out at the hospital and sent to the Hawaii State Department of Health Vital Statistics office,” Booth told WND. “It is from this office that the newspapers get their stats for births, deaths and marriages to announce in the newspapers.”

Her husband, Fred, and son, Alan, were born at the Kapi’olani Medical Center for Women and Children in Honolulu, Hawaii – the same hospital declared as Obama’s birthplace in a purported letter from the president.

“If he is going to claim he was born in Kapi’olani like my husband and my son, then I want him to show proof,” Booth said, explaining that a certification of live birth only shows that a live baby was born – and not necessarily in Hawaii.

“What he’s given us perpetuates the mystery of what he’s covering up and gives us more reason to not trust him,” she said. 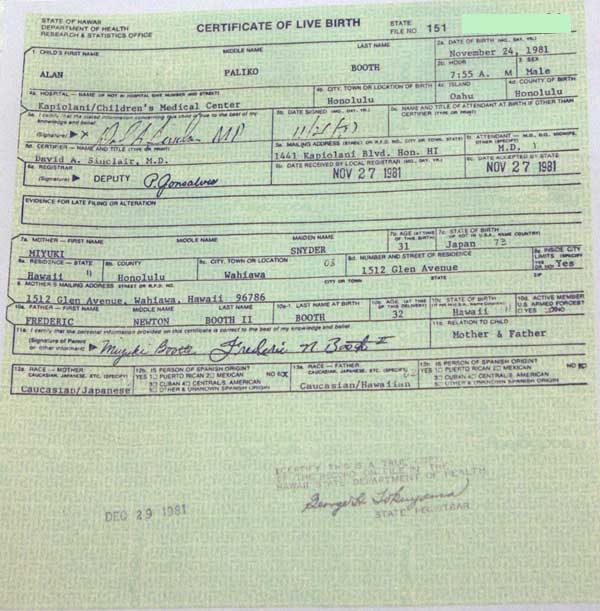 “I would say those people have bought into the notion that it’s a dead issue since it was ‘proved’ to them that Obama was born in Hawaii,” Booth explained. “What proof were they convinced by? Bill O’Reilly saying so? Newscasters saying so? ACORN saying so? The Internet
copy?”

She continued, “I wonder if these same people think we shouldn’t question his record of what passport he traveled to Pakistan with – or his Occidental records of foreign student funding and his Columbia records or his Harvard records or his Punahou records.”

The basis of the controversy is that at the time of Obama’s birth, a birth certificate (or certificate of live birth) could be phoned in.  There is no conspiracy behind Barry Soetoro becoming a US citizen besides his chances for a better life lay with US citizenship versus any other country.  Check out these links for more information.

Miki Booth just happens to be a member of GOOOH.  What’s that you ask?  Read on, and then go join!

“I believe in limited government, a free-market system, a strong national defense, states’ rights and our right to bear arms against a tyrannical government as our Founding Fathers intended when they wrote the Constitution,” she said proudly.

Booth is also a member of “Get Out Of Our House,” or GOOOH, pronounced “Go.” According to its website, GOOOH is “a non-partisan plan to evict the 435 career politicians in the U.S. House of Representatives and replace them with everyday Americans just like you. … GOOOH is not just another political party. It is a system that will allow you and your neighbors to choose, among yourselves, the person who can best represent your district.”

Booth said the GOOOH system is a plan by Tim Cox of Liberty Hill, Texas, a man who spent his career creating systems for Dell and developed credit card readers for gas pumps. She said candidates answer 100 questions on how they would vote on particular issues.

“That becomes your platform and also documents how you would vote, because it becomes a contract, and you will be held accountable” she explained. “There will be a timeline for candidate selection sessions where all members will go through a process of selecting their peers or be considered themselves, and someone will bubble up to the top after the session is completed. That person will be the GOOOH candidate to go on the ballot.”

She said when the organization reaches half a million people who invest $100 each, there will be a $50 million pot to fund national campaigns for those candidates – $1 million in each of the 50 states.

“I went home and asked Fred, ‘What would you think if got elected to go to Congress?’ He said, ‘I would be so proud of you.'”

Even if GOOOH doesn’t make critical mass by reaching the 500,000 membership mark, Booth has every intention of continuing her fight for the House seat currently held by Rep. Dan Boren, a Democrat.

For more information about Miki Booth, go to her site, here.