“Crash The Tea Party” (What Took Them So Long?)(UPDATED)

(Editor’s Note: I am assuming this is a leftist idea since there is nothing else on the page to identify anything about the organization.  We know how they like to hide…)

The arrogance of the left knows no bounds.  I did not originally cover the “Crash The Tea Parties” post from the anarchist website, InfoShop News (no longer found on the page titled “Crash The Tea Parties”), as did other sites because I only have so much time to write, the left is unbelievably arrogant, and it takes them so freakin’ long to catch up because of their arrogance………….until this morning.

A new site has hit the web, and it’s birth shows the power of the Tea Party Movement.  It’s all good to be a political protester and verbally dissent unless, of course, you are a right-wing, racist, homophobe, moron that makes up the fake grassroots movement call the Tea Parties.  Something about that sentence just does not make sense but I can’t put my finger on it.  Maybe it’s the ‘fake grassroots’ part.  If the millions of Tea Party Patriots are so fake, why does the left feel the need to start a CrashTheTeaParty site?

Once again, the left is a day late and way too many grey cells short.  At this point, nothing the progressives can do will stop the steamroller of average, everyday Americans who have stood up and said ‘ENOUGH!’ because the tipping point for those Americans still on the fence was reached last week when the Dems labeled Tea Party Patriots as violent, racist, extremists.  (A little secret for the left; Americans really, really, really, REALLY, hate liars.)

Good Luck with That...

UPDATE: 4.9.2010(PM)
I am never one to just click on links unless I’m pretty sure I know where I am going to end up. That being said, I DID NOT click on the “crash” link on the site, and was reprimanded mightily by a commenter:

If you’d bothered to go the crashtheparty.org site and click on ‘Crash’, you go to a forum that clearly reflects liberal-bashing and TEA-party sarcasm. It’s not a legitimate leftist site, and appears to be formulated for the purpose of ridiculing the criticism of TEA party bad actors. By fronting a false site and claiming to be planning nefarious activities, the TEA Party can then claim any racist or violent behavior by its members was actually the work of provocateurs and point to this site as evidence. (emphasis mine)

I have no idea what Just Celebrity News is on, but I did go over and further investigate, and am now convinced that it is a leftist organization. I’m not giving away the reasons why I believe this because my readers and tea party patriots will understand as soon as they see these screenshots. These are the epitome of the paradigm rift.  Lefties – you can spend some time trying to figure it out, or you can just get the hell out of the way while we clean up your mess.  This reminds me so much of that ObamaForum we saw earlier last year.

Teabagger's - No One Is Threatened by you

Why Birthers are so stupid 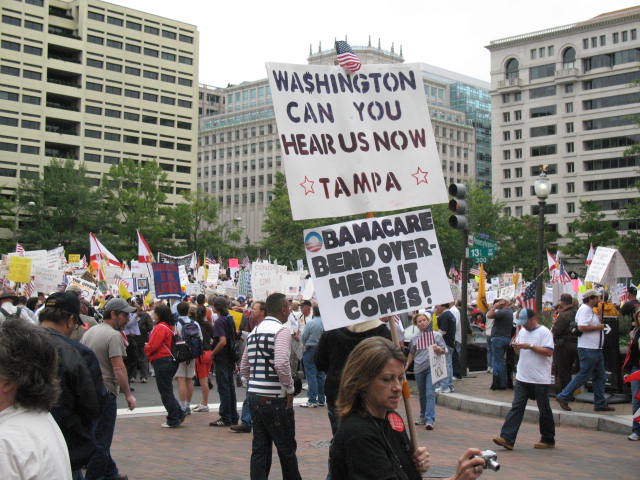