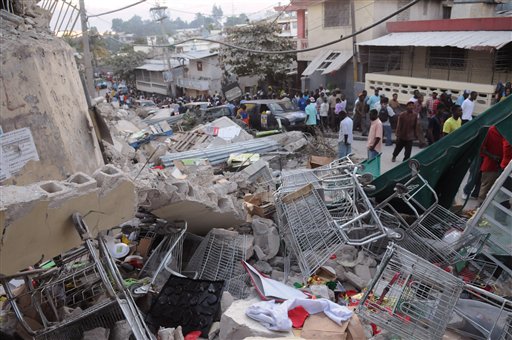 ..and Al Qaeda can just try to overcome the souls of the American people who are the driving force behind the rescuing of our brothers and sisters in Haiti.  When there is a disaster in the world, the people affected by that natural disaster turn their eyes to whom?  American Exceptionalism or Islamic Jihadist Terrorism.   Just one more reason to be hated, and I’m personally damn proud of that reason.  Reminds me of this.

Celebrities, companies, sports teams and regular Americans are mobilizing to help Haiti with an outpouring of generosity that could exceed private donations made after Hurricane Katrina and the 2004 Asian tsunami.

“We’re hearing that this is breaking all records,” says Sandra Miniutti of Charity Navigator, an independent group that evaluates U.S. charities.

After Hurricanes Katrina, Rita and Wilma struck the Gulf Coast in 2005, private donations by Americans totaled $6.47 billion, says Indiana University’s Center on Philanthropy. Almost $2 billion was given by private U.S. donors after the Asian tsunami.

As people learn more about the destruction, she says, “I think there will be more giving.” Amazon.com‘s homepage has a link to Mercy Corps that raised $111,000 in its first six hours.

No organization has compiled total giving, but donations are adding up quickly: Actors Brad Pitt and Angelina Jolie gave $1 million to Doctors Without Borders. CNN founder Ted Turner said he’ll give $1 million to relief efforts. The New York Yankees donated $500,000. Eli Lilly and Co. pledged $125,000 in immediate aid and $125,000 more over the next year.

The American Red Cross has raised $8 million through texts that add $10 donations to phone bills. Oxfam America has raised $2.7 million.