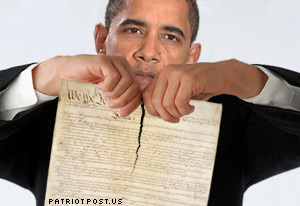 None of us thought that Sonja Sotomayor was going to be the last of Obama’s radical anti-Constitutional appointees to the bench.  Change the course of education and you are then able to change the course of the country through the courts.  Obama may be a total feather-head with his strings being pulled by a puppet-master, but the change he so desperately thinks is the “better way” is coming down the tracks at us.   All of this happening under the cover of push for Obamacare, and the supposed war between Axelrod and Emanuel. You know the Obama administration’s MO; when in doubt, attack something.  They can’t go after the American people, Fox News, or Glenn Beck so they are changing it up a bit.

Meanwhile, back in the real world…

Obama 9th Circuit Nominee: Constitution Must Adapt to Changes in the World

Even his critics describe him as “brilliant,” but President Obama’s newly minted judicial nominee — law professor Goodwin Liu — will not have an easy time getting to the 9th Circuit bench.

Liu has also aligned himself with progressive legal groups, including the American Constitution Society, where he is chairman of the board of directors. That’s prompting opponents to argue that Liu is “too far outside the mainstream” to take a seat on a court just one step below the Supreme Court of the United States.

“He believes the Constitution is something judges can manipulate to have it say what they think culture or evolving standards of decency requires of it in a given day,” said the Senate Judiciary Committee’s top Republican Jeff Sessions, R-Ala.

Ed Whelan, a one-time clerk to Justice Antonin Scalia and now president of the Ethics and Public Policy Center, echoed those concerns.

“Liu believes that judges have the authority to impose their views … using clever verbal camouflage to disguise what they’re doing.”

Liu opponents point to a number of his writings, including a book he co-authored in 2009 called “Keeping Faith with the Constitution,” in which the authors opine about their concept of judicial interpretation.

“Applications of constitutional text and principles must be open to adaptation and change … as the conditions and norms of our society become ever more distant from those of the Founding generation.”

That theme — that the Constitution’s text and principles must be adapted to changes in the world — repeats throughout the book and raises eyebrows among conservatives.

Others who know Liu point to what he’s accomplished, starting as the son of Taiwanese immigrants who didn’t speak much English.

Kendall’s group does not make a decision about whether to officially support nominees until their confirmation process has concluded, but he is impressed by what he knows of Liu so far.

Kendall said he believes Liu’s critics are wrongly portraying him as extreme.

Liu is no stranger to Capitol Hill. He testified against the nomination of Justice Samuel Alito during Alito’s 2006 confirmation hearings.

In a 2005 report Liu co-authored prior to his testimony, he wrote that Alito’s opinions “show a disturbing tendency to tolerate serious errors” and “reveal troubling perspectives on federalism, race, and due process of law.”

His testimony didn’t derail Alito but now Liu will face similar probing. Already, questions are being asked about whether the president’s is putting the young nominee on the fast track to the high court. (emphasis mine)


Kendall said only time will tell whether Liu would be the right fit, but it’s possible he could be in the running if he is confirmed to and serves well at the 9th Circuit. However, that is a possibility that “concerns” Liu’s detractors, including Whelan.

“That’s certainly an added factor that folks in the Senate need to take into account,” he said.

Bad Behavior has blocked 2751 access attempts in the last 7 days.