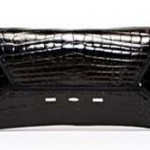 The Point Of The 6K Purse Story

I have seen talking heads, and read bloggers covering the fact that Michelle Obama is carrying a $6k purse during a depression.  These talking heads and bloggers have missed the true point of this story; more Chicago arm-twisting thuggery, and now, backpedaling.

Call it a case of mistaken identity.

No way, said the White House, which countered that the First Lady was carrying an $875 VBH patent leather clutch.

After sticking to their initial claim, the high-end leather manufacturer is now backing off. “If that’s what the White House is saying, then it’s a patent bag,” admitted VBH rep Kelly Vitko.

Despite being certain about the bag being the nearly $6,000 version – “it’s definitely ours [manila bag],” she said earlier this morning — the rep now says that she made an assumption and misidentified the bag.

It appears that calls were made VBH, and now Michelle Obama gets to have her cake and eat it too.

Have the Emperor and Empress added any new czars today?

Can We Impeach/Arrest Obama yet?

(Now excuse me while I go cross-eyed figuring out the State Dept. appropriations bill.)