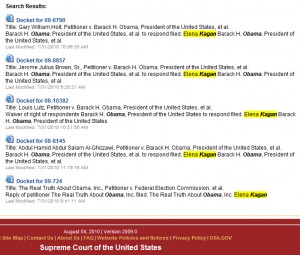 (Editor’s Note:  I am bumping this post up because of the relevance considering the hearings.)

Thankfully, organizations with the proper resources are vetting these global progressives. Kagan is as dangerous to the continued Constitutional freedoms we are rapidly losing as Sonja Sotormayor and her love of Norman Mattoon Thomas – six time Socialist presidential candidate that finally stopped running because the dems were getting the job done.

But in a 2006 Harvard news release explaining the changes, Kagan explained the move away from constitutional law was deliberate: “From the beginning of law school, students should learn to locate what they are learning about public and private law in the United States within the context of a larger universe — global networks of economic regulation and private ordering, public systems created through multilateral relations among states, and different and widely varying legal cultures and systems.

“Accordingly, the Law School will develop three foundation courses, each of which represents a door into the global sphere that students will use as context for U.S. law,” the guide said.

Among the three new required courses Kagan introduced, one focuses on public international law, involving treaties and international agreements, and the second is on international economic law and complex multinational financial transactions, according to a Harvard news release.

But the third course, on comparative law, “will introduce students to one or more legal systems outside our own, to the borrowing and transmission of legal ideas across borders and to a variety of approaches to substantive and procedural law that are rooted in distinct cultures and traditions,” the release said.

Make sure to go over to CNS and read the rest so you know exactly what type of SC justice the District of Criminals is going to give us next….oh, and make sure you have your bucket ready; you’ll need it.

(P.S. Does anybody know of any law or resolution that removes Sonja from the court, and Kagan after they confirm her on Constitutional grounds?)

WE TOLD YOU SO! (Time To Get Your Socialism On)

The Breyer-Sotomayor-Ruth Bader Ginsburg dissent urged that Heller be overruled and declared, “In sum, the Framers did not write the Second Amendment in order to protect a private right of armed self defense.”

Contrast that with her Senate testimony: “I understand the individual right fully that the Supreme Court recognized in Heller.” And, “I understand how important the right to bear arms is to many, many Americans.”

Yet her McDonald opinion shows her “understanding” that those many, many Americans are completely wrong to think they have a meaningful individual right.

To the Senate Judiciary Committee, Justice Sotomayor repeatedly averred that Heller is “settled law.” The Associated Press reported that Sen. Mark Udall, Colorado Democrat, “said Sotomayor told him during a private meeting that she considers the 2008 ruling that struck down a Washington, D.C., handgun ban as settled law that would guide her decisions in future cases.”

So by “settled,” she apparently meant “not settled; should be overturned immediately.”

It is my understanding that the Founders did not wish for a standing national army that could be used against “We The People”, and that is why the 2nd Amendment covers militias. I believe the problem comes in the fact that there should have been two amendments; one to cover individual ownership, and one to cover the militia aspect. I do not believe the Founders could have expected the stupidity that we have seen with the ‘interpretation’ of the very narrowly written 2nd Amendment.

What part of ‘shall not be infringed’ requires deciphering?

Just for you, loyal readers – from DiscoverTheNetworks:

Elena Kagan was born in April 1960 in New York City.

A week after Ronald Reagan’s presidential victory in November 1980, Kagan, who was then a student at Princeton University, contributed a piece to the Daily Princetonian, wherein she gave voice to her angst over the apparent demise of the left. She wrote that her immediate “gut response” to Reagan’s election had been to conclude “that the world had gone mad, that liberalism was dead, and that there was no longer any place for the ideals we held or the beliefs we espoused.” Soon thereafter Kagan predicted, with a hopeful spirit, that “the next few years will be marked by American disillusionment with conservative programs and solutions, and that a new, revitalized, perhaps more leftist left will once again come to the fore.”

The following year, Kagan penned her senior thesis—titled “To the Final Conflict: Socialism in New York City, 1900-1933”—wherein she specifically thanked her brother Marc, “whose involvement in radical causes led me to explore the history of American radicalism in the hope of clarifying my own political ideas.” In the body of that work, Kagan lamented that “a coherent socialist movement is nowhere to be found in the United States”; that “Americans are more likely to speak of … capitalism’s glories than of socialism’s greatness”; that “the desire to conserve has overwhelmed the urge to alter”; that “in a society by no means perfect,” no “radical party” had yet “attained the status of a major political force”; that “the socialist movement [had] never become an alternative to the nation’s established parties”; and that the Socialist Party had “exhausted itself forever and further reduced labor radicalism in New York to the position of marginality and insignificance.” Kagan called these developments “sad” and “chastening” for “those who, more than half a century after socialism’s decline, still wish to change America.”

END_OF_DOCUMENT_TOKEN_TO_BE_REPLACED

Where is the conundrum?

That is the beginning and the end of the conversation.

AYFKM?  Given this rational, I should be a shoe-in for the chairmanship of the Joint Chiefs because I have worked for former military, or maybe the President and Leader of the Free World because I have been following politics for decades and have actually read the Constitution.

I’m not saying this lawyer isn’t talented, but she absolutely does not have the PROPER credentials to be appointed to the highest COURT in the land as a JUSTICE for the rest of her life.  AYFKM?  (On a completely related note, you might want to check out Snark’s best today; Mullah Omar Captured, Named to Supreme Court)