Just as a preface to the petition that this post is about, three days ago, I wrote this piece about the beginning of the petition movement on WhiteHouse.gov for states to peacefully secede from the union:

In that timespan, (as far as I can tell from counting the petitions) PEOPLE from 38 states have posted a petition asking to peacefully secede from the United States.  Now remember, these are petitions from the average moo who has been trained to ask ‘by your leave’ of their trusted elected ‘servants’.  Pathetic.  Working backwards from the top of the page; Minnesota, New Hampshire, Illinois, Idaho, Georgia, Rhode Island, Virginia, Wisconsin, Utah, Ohio, South Dakota, West Virginia, Nebraska, Pennsylvania, Kansas, Oklahoma, Wyoming, California, New York, Delaware, Nevada, Arizona, Arkansas, South Carolina, Missouri, Texas, Louisiana, Tennesee, Michigan, Colorado, Oregon, New Jersey, North Dakota, Montana, Texas, Florida, North Carolina, and Alabama.  There is also a petition for the City of Austin to secede from Texas and stay with the union.  The heights of ridiculousness.

Now, here is the petition that this post is all about:

we petition the obama administration to:

Mr. President, please sign an executive order such that each American citizen who signed a petition from any state to secede from the USA shall have their citizenship stripped and be peacefully deported.

…and of course, the required screenshot: 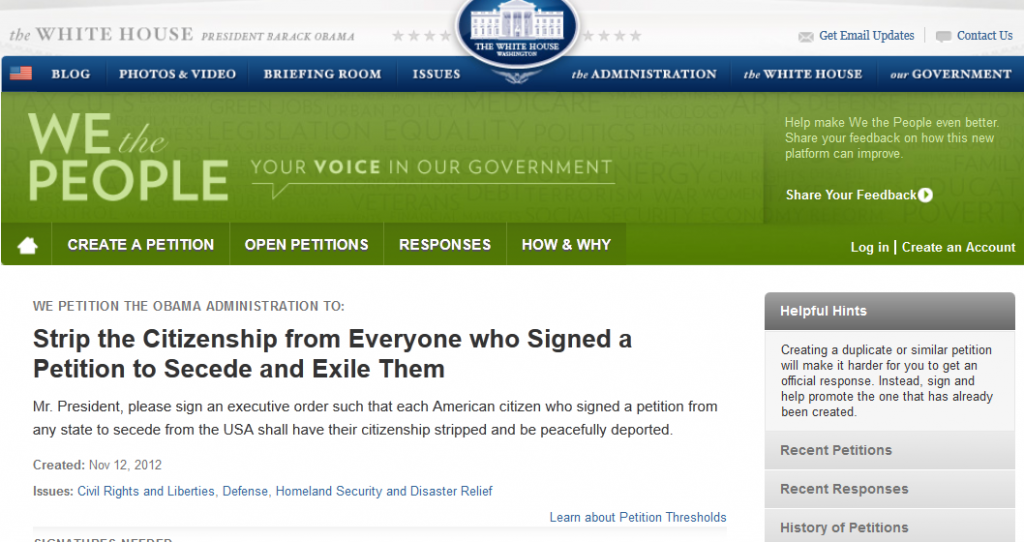 Once again, first – one does not ask the powers that be if one can secede; one (usually an entire state) just does it and suffers whatever advantages or consequences from such a move.

Secondly, the globalists have done their re-education job well if one has a significant segment of the population thinking it is perfectly acceptable to post a petition asking the Dictator-In-Chief to strip the citizenship and exile any dissenters (usually real Americans that have read and understand the Constitution and our form of government) from the herd.  We ARE the Republic of China now.

This is the difference between real Americans and liberal moonbats; we would never ask anybody to go round up and deport the people that voted for Obama either the first or second times – even though their votes identify themselves as being anti-American and globalist tools.  Constitutionalists actually believe in the 1st amendment and the right to free speech and political dissent.  The liberal moonbats? Meh, not so much.

Now, can we pay attention to what is really important; namely Syria, Turkey, Iran, Israel, Agenda 21 ads in the mainstream media, and whatever the hell the CIA is actually up to (and I don’t mean the other dog and pony show – Petraeus, his mistress, emails…bs)>