Ron Paul has won 15 straw polls….have you heard that?  You won’t hear that because they want you to believe that you are alone so that you will vote for the best marketed GOP candidate who mimics everything that Ron Paul says.  What happens when Dr. Paul wins the Iowa Primary?  How they going to spin that?

Jerry Doyle to CNBC – You Just Pulled A Bill O’Reilly:

Guest Post: Be Honest CNBC – You Are Biased Against Ron Paul

Those of us who have supported Ron Paul since his presidential run in 2008 (and some who supported him long before that) have come to expect an astonishing array of mainstream media tricks, lies, and censorship when it comes to the “journalistic” examination of the good doctor. This doesn’t mean, however, that we have ever or will ever come to ACCEPT this consistent trend of deception and disinformation as a forgone conclusion of our political lives. We will never throw up our hands and walk away from the mess the MSM has deliberately created, because that is exactly what they would like us to do; give up, shut up, go home, vote for Romney (an establishment crony with the creepy grin of a pedophile), and watch him lose to Obama (yet another establishment crony) in 2012.

With this stated up front, it was brought to my attention that CNBC was running a poll asking readers who they thought won the recent Republican Presidential Debates in Michigan. Now, as in many polls in 2008, the name “Ron Paul” has been rising to the top of the charts in 2011 despite all efforts by media lapdogs to dissuade the public from even considering such a candidate. CNBC did not fail to play its roll this time around either. Ron Paul won by a substantial margin, and of course, their response was to take the poll down! Here was the explanation given by CNBC Managing Editor and all around bottom feeder, Allen Wastler:

Gamed Poll…So We Took It Down

We had a poll up from our Republican Presidential Debate asking readers who they thought won. One candidate was leading by such a margin that it became obvious the polling wasn’t so much a reading of our audience, but of the Internet prowess of this particular candidate’s political organization. We have therefore taken the poll down.

Yes, we’ve gone through this exercise before.

Wastler then provides a link to a rather patronizing statement he made back in 2007 to explain why CNBC dumped polling results then as well:

First of all, let’s be serious, folks! Regardless of what you might feel personally about Ron Paul or his political position, it has become painfully obvious to even the most oblivious subsections of the American populace that the MSM, from supposed “right wing” outlets like FOX, to supposed “left wing” outlets like CNBC, have gone WAY out of their way to ridicule, suppress, or completely ignore him.

Now, you really need to ask yourself, why is that?

If Ron Paul is such a “fringe” candidate with “no chance” of winning, then why all the trickery and subversion? If his political methodologies are so ridiculous or out of sync with the American people, then why not plaster his face on every TV screen in the country and let him destroy his own career? Why hide him from public view?

The answer is simple; because he IS a threat. His position is one of government transparency, limited power, and financial independence. He predicted the credit crisis and the mortgage bubble implosion long before they ever occurred. The guy wants to shut down the Federal Reserve and the cartoonish brute squad otherwise known as the IRS. He wants to end the costly and fraudulent wars in the Middle East and bring the troops home (really bring them home, not make fake statements about bringing them home and then keep them on the ground for another few years). Of course the MSM, a corporately controlled monopolistic sham, is working overtime to keep Paul down!

Think about it. Sit back and consider. If Ron Paul was actually allowed to stand on the same stage as Barack Obama in a fair debate, there would be no half hearted girly-slap pansy sparring going on as there would be in a match between Obama and Romney. Ron Paul would destroy Obama! It would be a massacre of historic proportions! The establishment, which represents a minority of elitists in this country and not the citizenry in any capacity, will not let this happen.

An image for thought… 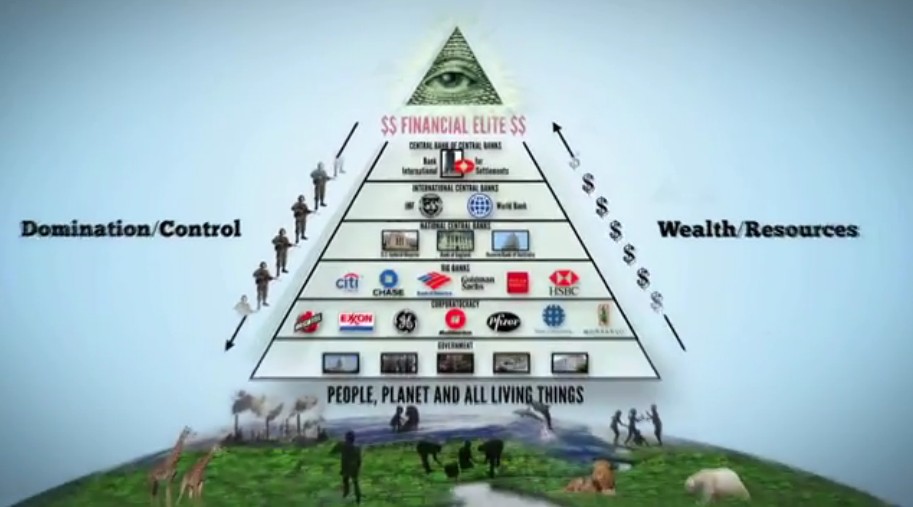 Most of my readers have stopped watching Bill O’Reilly because he is such a shill for the globalists and the establishment political elite. I still watch him from time to time to see how bad his sycophancy has become but after his disqualification of Ron Paul from his own poll for Paul supporters ‘slamming’ (without proof) the poll, Ron Paul supporters have decided to show Bill O’Reilly and now CNBC what ‘Blowback Slamming‘ is all about. Score yet another new concept (Moneybomb and Tea Party) for the Ron Paul Revolution!

We reported that Blowback was occurring for Bill O’Reilly. On Monday Nov. 7 O’Reilly attacked Ron Paul and his supporters for voting and winning his one man show debate forum poll. Bill said that the Paul supporters ‘Slammed’ the poll therefore he was disqualified. After this exclusion Paul supporters began to fight back and ‘slam’ O’Reilly’s facebook page. Here is Tuesday’s article of the blowback that ensued
http://libertypulse.com/article/bill-o-reilly-s-attack-on-ron-paul-boycott-blowback-in-motion/

Paul supporters have been posting pro Ron Paul videos, news articles, polls and comments on Bill O’Reilly’s Facebook page for the entire week. Almost every few minutes or so a Ron Paul supporter would put something on Bill’s Facebook page and they have been very creative. If one didn’t know what was happening they would think they’re on Ron Paul’s fan page. Some supporters called this Occupy Bill O’Reilly they are intent on showing O’Reilly the definition of ‘Blowback’ by ‘Slamming’.

Bill O’Reilly’s Facebook Page is no longer available for posting to ‘Everyone’ other than Bill.

O’Reilly’s ‘everyone’ can post portion is no longer available
https://www.facebook.com/billoreillyfnc?sk=wall&filter=1

Has this stopped the blowback? No, now Paul supporters are slamming the comments section of every post O’Reilly puts on his facebook page as well as the comment section of Bill’s photos.

‘Blowback Slammed’ has not been limited to just O’Reilly’s Facebook page his Amazon book reviews have been hammered to the tune of 650 one star rated reviews for his new book Killing Lincoln giving his book an overall 2 star rating.

CNBC has now attacked Ron Paul by removing the poll because his supporters voted and overwhelmingly won the post debate poll. Now, CNBC is the target of ‘Blowback Slamming’ on facebook.
http://www.facebook.com/cnbc?sk=wall&filter=12

Jerry Doyle National talk show host has been covering the exclusion of Ron Paul because he won the poll in both O’Reilly and CNBC post debate polls and his commentary is in the video below.