The two week old liberal based movement to occupy Wall Street and protest the greed and corruption of the international bankers and their political puppets is now spreading all across the United States and internationally.  At last count there were 115 American cities participating, and numerous cities across the world in countries including Japan, Australia, Canada, France, and England.  You may not espouse all of the tenets of these particular protestors, but they are doing more to stop the looting and start the prosecuting of the Too Big To Fail banks than the middle and conservative factions of this country that still have money in the TBTF banks and their stocks.  Time to pony up folks and put your money where your mouth is.  If you want to cut the head off the beast, the central banking system that created the reason for the IRS needs to be disbanded.

The unofficial hub site for OccupyWallStreet states this about the movement:

Occupy Wall Street is leaderless resistance movement with people of many colors, genders and political persuasions. The one thing we all have in common is that We Are The 99% that will no longer tolerate the greed and corruption of the 1%. We are using the revolutionary Arab Spring tactic to achieve our ends and encourage the use of nonviolence to maximize the safety of all participants.

#OccupyWallStreet to RT: Revolution at any cost!

For those that don’t believe we are completely financially screwed…

Here is a piece from ZeroHedge.com that hopefully will make you all understand, once and for all, that this ain’t the 1930′s, and that there is absolutely no way in hell that this Republic is going to make it to November 2012.

Five Banks Account For 96% Of The $250 Trillion In Outstanding US Derivative Exposure; Is Morgan Stanley Sitting On An FX Derivative Time Bomb?

Okay, what the hell is derivative exposure? What this is referring to are over-the-counter non-exchange traded forward delivery (or “futures”) contracts of various kinds. I am a futures broker, but I only execute futures contracts on the futures exchanges, namely the Chicago Mercantile Exchange and the New York Mercantile Exchange. About ten years ago a new “novelty” emerged in the futures business – the so-called “over-the-counter” contracts. There was a kid in the office I worked in who got wind of this and had all kinds of stars in his eyes about making a killing off of these “OTC” contracts because the brokers’ commissions were not a flat fee but a percent of the contract value. Here’s the problem with OTC contracts: there is no exchange standing between the buyer and seller as a guarantor.

In my business, when a customer executes a trade on a futures or options contract, it makes no difference who the other guy is on the other side of the trade, be it executed electronically or in the pit. None of us have to worry for a second about the counterparty on our executions because the EXCHANGE ITSELF stands between ALL transactions as the ultimate guarantor. The exchange then enforces the financial requirement rules with the Clearing Houses, the Clearing Houses enforce the financial requirement rules with the brokers, and the brokers enforce the financial requirement rules with the customers. That is the chain of financial responsibility. So, even if a customer bugs out and fails to financially perform on a contract, the contract WILL BE MADE GOOD by extracting the money from the broker, then the Clearing House and finally the Exchange.  This massive enforcement buffering is what gives the system integrity.

OTC contracts have no exchange. They are a flipping free-for-all. If someone bugs out on a contract, the poop hits the fan. The counterparty has their pants around their ankles and the broker is caught in the middle. That’s why when that kid in my office years ago got all starry-eyed, I thought to myself, “I wouldn’t do that OTC crap if you put a gun to my head – no matter what the commissions were. It would be Russian Roulette. Eventually someone would default and it would financially destroy the broker instantly, and perhaps the counterparty as well.”

Let’s take my business – cattle futures. One contract is 40,000 pounds of live cattle. The spot contract settled at $119.725 per hundred pounds today. So, 40,000 pounds X $1.19725 (shift the decimal) = $47,890 total value of the contract. Since this is an exchange traded instrument, the customer doesn’t really don’t have to worry about default and can go ahead and book that $47,890 today, and it will be offset at a later time, and the net of the entry and exit will be the P&L. The contract isn’t going to default, so the derivative exposure is limited.

Okay. These banks are carrying these OTC futures contracts with NO exchange to guarantee anything. And they are carrying these contracts largely WITH EACH OTHER. So JP Morgan might be the long and Goldman Sachs, or some insolvent bank in Europe is the short on the other side. If these banks default, which is now a mathematical certainty because they are not only insolvent, but insolvent multiple times over and there isn’t enough money in the world to bail them out, there is going to be a cascading default on all of these OTC contracts.

Now look at the value and exposure of these OTC derivatives again: the top 5 banks in the US alone have exposure of $238 TRILLION dollars.

The total GDP of the United States is $14.5 Trillion.

The total GDP of China is $6 Trillion.

JP Morgan BY ITSELF has derivative exposure equal to over FIVE TIMES the value of the entire US GDP.

And no, there will not be a 1:1 offsetting in a collapse, because the collapse will be asymmetrical, and the bankrupt party will first pursue FULL payment on its “longs” (think of these as accounts receivables) while its “shorts” (accounts payable) will only pay out 20 cents on the dollar OR LESS. In other words, these entities will tear each other apart in a mad dogfight and this dogfight will take the entire world down with it.

AND THAT IS JUST FIVE BANKS.

AND THE MASSIVELY CORRUPT AND INCOMPETENT SECURITIES REGULATORS, BOTH GOVERNMENTAL AND PRIVATE, SAT BY AND WATCHED THIS HAPPEN. That is what happens when you let a group of criminals run a bureaucracy of affirmative action hires to “audit” the financial industry. Scroll down and read my post titled “There Must Be A Reckoning.”

It’s over. There is no coming back from this. The only thing that can happen is a total and complete collapse of EVERYTHING we now know, and humanity starts from scratch. And if you think that this collapse is going to play out without one hell of a big hot war, you are sadly, sadly mistaken.

And how about this for the wayback machine: 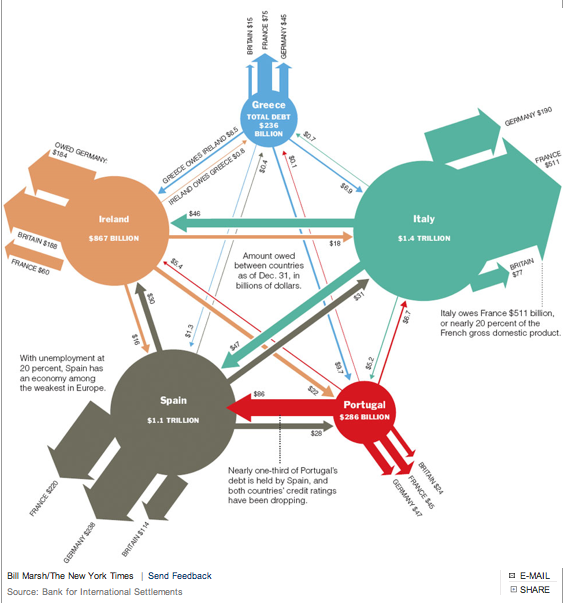 More trillions needed for the Eurozone

Reports from the weekend suggested a £2.6trillion plan was being drawn up to allow Greece to escape repayment on half of its towering debt and to quadruple the size of Europe’s bailout fund.


The International Monetary Fund (IMF) has been co-ordinating talks with leaders in Washington and has reportedly drawn up a plan aimed at providing a way for Greece to manage a default on its debt, which now stand at 160 per cent of its GDP.


And Banks rallied on hopes that a deal may be near with Barclays the biggest FTSE 100 riser, up 7 per cent.

It is thought the plan will include a 50 per cent write down to those debts, with private investors, notably eurozone banks, suffering huge losses on the Greek government debt they hold.

Unelected, Unaccountable, Unrepentant: The Federal Reserve Is Using Your Money To Bail Out European Commercial Banks Once Again

For a moment, imagine that there is a privately-owned organization in the United States that can create U.S. dollars out of thin air whenever it wants and can loan that money to whoever it wants to.  Imagine that this organization is able to act with the full power of the U.S. government behind it, but that nobody in the organization is ever elected by the American people, and that for all practical purposes the organization is not accountable to the president or to Congress.  Imagine that the organization is able to make trillions of dollars of secret loans to banks, to foreign governments and even to their close friends without ever having to face a comprehensive audit.  Does that sound preposterous?  Well, such an organization actually exists.  It is called the Federal Reserve, and today we found out that once again the Fed is going to be taking huge piles of your money and loaning it to commercial banks in Europe.  The Congress cannot overrule this decision.  Neither can Barack Obama.  Because it has so much power, many refer to the Federal Reserve as “the fourth branch of government”, but unlike the other three branches of government, there are basically no significant “checks and balances” on the Federal Reserve.  If you don’t like the fact that the Federal Reserve is racing in to help big foreign banks survive the European debt crisis that is just too bad.  The Federal Reserve pretty much gets to do whatever it wants to do, and the folks over at the Fed simply do not care whether you like that or not.

So what in the world just happened today?  The following is how an article on CNBC explained it….