In yesterday’s commentary, I pointed out that the name calling starting with ‘racists’ to ‘astroturf‘ to ‘domestic terrorists’ to ‘radicals and extremists‘ to ‘hobbits‘ was not going to make one iota of difference to tea party patriots who don’t give a flying rat’s a** what the left, the right, and the political elite call us because we are trying to keep our children from being sold down the river by those very same greed-driven pirates.  I pointed out that the political class were going to have to do better with the name calling.  Enter ‘financial terrorists’ (and our reaction is….yawn…whatever…we’ll still be here waiting you bastards out when it all comes tumbling down…and rest assured it will; one can only loot an entire world’s population for so long.)

A trend is emerging on MSNBC’s “Morning Joe,” whereby guests make inflammatory statements likening conservatives to terrorists, and none of the co-hosts insist on a more elevated level of dialogue.

Following in the footsteps of Newsweek’s Tina Brown and Rep. Steny Hoyer (D-Md.), two MSNBC analysts called conservatives in Congress “economic terrorists” and “crazy” on Friday, yet none of the program’s co-hosts questioned the offensive choice of words or called for a more civilized tone.

Poor Steve cannot seem to handle somebody having the audacity to say ‘no more thievery on our watch’.

You know, the problem with this is it’s like a form of economic terrorism. I imagine these Tea Party guys are like strapped with dynamite, standing in the middle of Times Square at rush hour and saying, ‘either you do it my way, or we’re going to blow you up, ourselves up, and the whole country up with us.’ So you tell me how those kinds of standoffs end.

It has become commonplace to call the tea party faction in the House “hostage takers.” Butthey have now become full-blown terrorists.

They have joined the villains of American history who have been sufficiently craven to inflict massive harm on innocent victimsto achieve their political goals. A strong America has always stood firm in the face of terrorism. That tradition is in jeopardy, as Congress and President Barack Obama careen toward an uncertain outcome in the tea party- manufactured debt crisis.

The Republicans have been willing to concede nothing. Their stand means higher interest rates, fewer jobs created and more destroyed, a general weakening of this country’s standing in the world. Osama bin Laden, if he were still alive, could not have come up with a more clever strategy for strangling our nation.

You know, the problem with this is it’s like a form of economic terrorism. I imagine these Tea Party guys are like strapped with dynamite, standing in the middle of Times Square at rush hour and saying, ‘either you do it my way, or we’re going to blow you up, ourselves up, and the whole country up with us.’ So you tell me how those kinds of standoffs end.

Former green jobs czar Van Jones is careful not to use the term “terrorist,” but the connotation is clear:

Any faction in America that would put a gun to the head of 310 million people and say ‘If you don’t do it our way, we will blow your dreams away, we will blow a hole in the American economy’, that is un-American.

[The tea party movement] is so lacking in any aspiration for American greatness, so dominated by the narrowest visions for our country and so ignorant of the fact that it was not tax cuts that made America great but our unique public-private partnerships across the generations. If sane Republicans do not stand up to this Hezbollah faction in their midst, theTea Party will take the G.O.P. on a suicide mission. 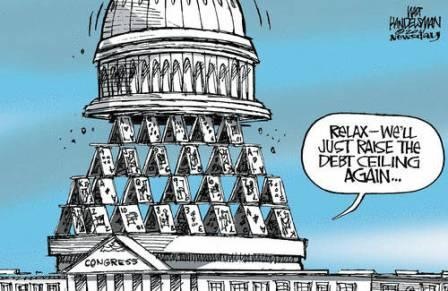 The truly important view to take of this entire situation is the question:  “who exactly are the financial terrorists?”  The Tea Party stating ‘Don’t you dare raise that debt ceiling and weaken our country further!!!‘ or the freakazoids promising NOT TO TAKE THE $14 TRILLION DOLLAR DEBT TO $17 TRILLION AND ABOVE?  Have any of these clowns kept a promise yet?   And that’s not all folks, if you order right now, you will receive the ‘Super Congress’ of 12 clowns deciding the fates of 310 million people and give Chairman Zero a process in which he can raise the debt ceiling without congressional approval.

How’s that for a deal?

And you thought the tea party were the extremists and financial terrorists?

We’ve gone from 535 losers deciding our fate to 12 and a dictator.  Welcome to the New World Order, globalist style.

Ron Paul “How Do You Solve The Debt Problem By Raising The Debt?”

Bad Behavior has blocked 1634 access attempts in the last 7 days.